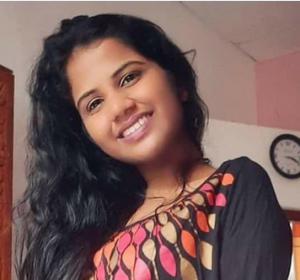 “All good things must come to an end” but every ending paves the way for new beginnings. It wasn’t just another Saturday evening for all of us at Gavel Mora. It was the time for us to say goodbye to our outgoing Executive Committee and welcome the new Executive Committee for the year 2021.

Although the Covid-19 pandemic has prevented us from having a physical installation ceremony, all of us at Gavel Mora were excited to be gathered in a virtual meeting filled with many pleasant memories of last year. It was the 15th Installation Ceremony of the Gavel Club of University of Moratuwa.

The meeting began with the national anthem. Our beloved President Amaya Dharmasiri started her last meeting as the president welcoming all to the installation ceremony. She handed over the controls of the meeting to the Toastmaster of the day Nikila Dharmadasa  as per gavel traditions. Nikila then introduced the timer for the day, Kaveesha Yalegama.

Instead of the usual tradition of bashing the president, Nikila had come up with a new idea for the round robin session; “Fondest Memories you had with President Amaya”.

Chathumi, our beloved Vice President Education, spoke about how awesome it was to work with Amaya and how closer they have got in the past year. Madhushika said that what she likes the most about our President Amaya was that she was cool and funny but at the same time strict and straightforward when it was needed. Shahan introduced Amaya as the most terrifying president of Gavel we never had and Nushan reminisced about the “Hi!” Moments he had with President Amaya which usually ended up with him helping Amaya to put up posters and run errands.

Next in the agenda was the Table Topics session. Our Vice President Education Chathumi Thumbovila was the Table Topics Master for the day. She had chosen an interesting approach for the table topics session. There were 12 numbers displayed on the screen and each number had a hidden picture of our beloved Gaveliers. Speakers had to talk and share their memories about the people in the picture. As it was really fun and interesting to see whose picture was behind which number and whom they got to speak about, everyone was enthusiastically trying to grab their chance to speak.

During the Table Topics session, Paul recalled the first day where Chamuditha introduced him to the Gavel Club and how Gavel became his family. Shahan said that  Gavel gave him everything he wanted and revealed a story of how Gavel kept him going during hard times at University. Jayoda; our Speech Olympiad winner for 2020 said, the nicest thing about Gavel is that it makes us smile. Akmal, one of the oldest members in the outgoing board said that Gavel is family and that no matter where you go, you are bound to encounter someone from Gavel. Everyone present could relate to that feeling of Gavel being a family where we fit right in and to which we all belong to.

With that Nikila noted the end of the Table Topics session and handed over the controls back to President Amaya.

Although the proceedings of the usual meeting were over, the evening was still young. President Amaya took all of us back to some of the memories we made during the past year; the Orientation, Valentine’s meeting, and many other themed meetings including Father’s day, Childhood, Friendship, Halloween and Christmas.  She proudly said that “Although the odds were against us, we have gone from the 393rd  meeting to the 424th  meeting through a virtual platform”.

Next, the Treasurer of the outgoing board Randula Abeyweera shared the cash flow expenses of the year 2020. Then our dearest President Amaya recognized the Achievements of our Gaveliers during the year 2020 and presented them with certificates for their outstanding contribution to the club. Our dedicated gavelier Madhushika Mnasinghe was awarded as the Gavelier of the year. 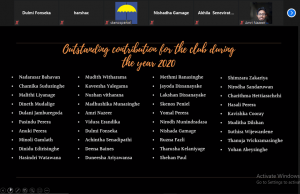 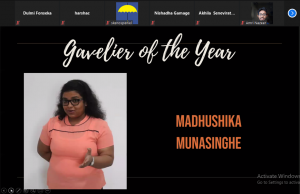 After that, Our beloved President Amaya signed off by bidding farewell to her role as the President of the Club, reminding all of us that although we are a very small family, we at Gavel have gotten the chance of getting influenced by a unique set of individuals. She thanked everyone at Gavel for making the year 2020 so much better than it could have been. With that, she welcomed the new president of the Gavel Club of  University of Moratuwa for the year 2021; Dinidu Edirisinghe. 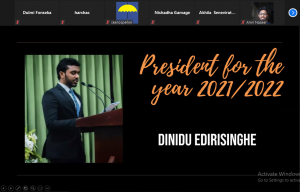 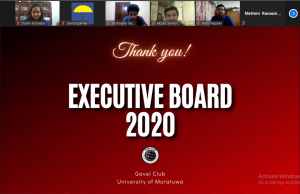 Dinidu made his first address as the president saying he wants to make sure the members feel that they are part of something bigger than themselves and keep the Gavel family going strong. Next, he introduced the newly appointed executive committee for the year 2021. After presenting a video filled with many memories as a tribute to the outgoing Executive Committee, President Dinidu expressed his gratitude towards all the past board members personally. After thanking everyone for their valuable participation, President Dinidu marked the end of the 15th installation ceremony of the Gavel Club of University of Moratuwa. 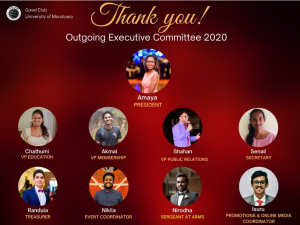 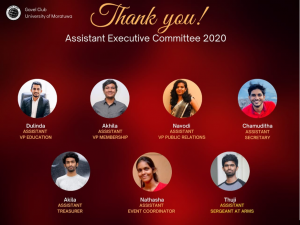 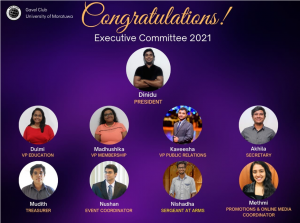 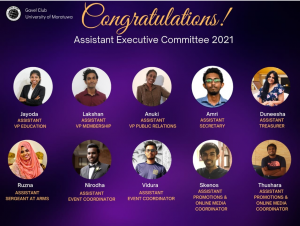