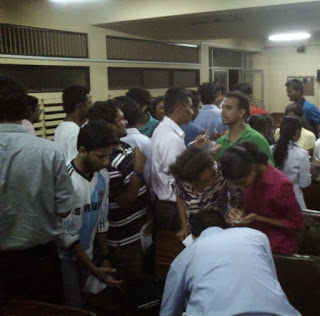 After a successful orientation meeting Gavel members again
met on 20th of June 2013 for another Gavel meeting. It was the 172nd
Gavel meeting held at room no 215, Sumanadasa building.
Role players for this meeting were as bellow:
Toast Master – Isuru Pasan
Topic Master – Sirimevan Jayasundara
Timer- Hiran
Chathuranga
Ah counter – Imesh
Lihinikaduarchchi
Grammarian – Sachille Athapaththu
CL Evaluator- Sandareka Wickramanayake
Table Topic Evaluator I- Dinesh Kenady
Table Topic Evaluator II- Rukshan Maliq
General Evaluator – Charith Akalanka
The president, Pasan Pethiyagode commenced the meeting at
about 5.15 p.m.  According to usual
proceedings everyone stood up for the national anthem. Then toastmaster, Isuru
was given the control of the meeting. After a wonderful round robin session he
called upon the Table Topic Master, Sirimevan. Sirimevan put an exciting array
of topics on the table which led to an entertaining and worth listening
speeches. Then time was for the evaluation reports. After taking those reports
control was returned back to the Toastmaster. Toastmaster then called the
president to conduct a special event. It was a game in order to enhance
negotiation skills. What players had to do was meet anther five players,
negotiate and divide 100/= so that he/she would be able to get the bigger
portion. The game was really interesting and funny. Everyone took part
actively. The person who got the highest amount was the winner. Then came the 2nd
part of the game. Two volunteers were invited to argue on a given topic. Two
new comers accepted the challenge. After the first round the debaters were
asked to argue on the opposite topic. After an enjoyable session Toastmaster
called the Grammarian’s report. Then General Evaluator presented his report.
The president concluded the meeting at about 7.45 p.m.