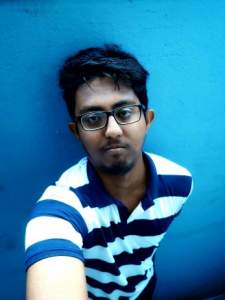 We never change our lives until we step out of our comfort zone; change begins at the end of our comfort zone. It is one’s interest and will to come out of his or her comfort zone that diverts their life into a challenging and successful path. It is an evening with a cloudy sky of a Wednesday in the month of March (4th) where a lot of smart newcomers from different faculties in the university came out of their comfort zones and headed towards the Civil Auditorium with their minds unclear about the Gavel Club of the University of Moratuwa. Similar to the year before the crowd was so high which made some of the existing members stand at the back and have a humble pride in their hard work which made more people come to the orientation. It was all about orienting their university life into the correct path. 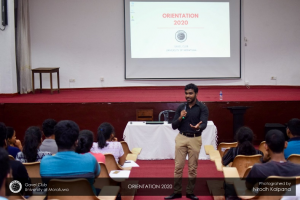 Hasindri and Dinidu our very well-known members of the club started the orientation with a good introduction to the eve with good charisma and making everyone more interested in the Orientation Programme. Everyone started eagerly listening to them to find out what Gavel really is. At that point, Hasindri asked a question from the audience, “Where do you see yourself when graduating from the university?”. This made the audience to dive into their thoughts about their unpredicted future. That crafted the way to a successful orientation day. 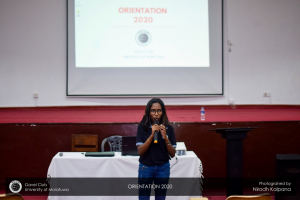 Next, the stage was taken over by our very own president, Amaya Dharmasiri to welcome all of the newcomers while sharing her own story and her own experiences in her journey with Gavel. Her own thoughts on sharing the idea in her mind to people effectively to make a real impact were very special. It described her journey of learning the power of communicating effectively and efficiently while having loads of fun, of course.

We all meet many people in our lives, some people to teach us lessons and some people to grab something from us, however, it’s all about matching people. That is an idea which Nikhila came up for an ice breaker session, to uplift the fun factor of the orientation and make everyone actively engage in that wonderful evening. In the ice breaker, everyone had to match each other and find the best matching person based on some basic factors. It made everyone stand up from their seats and start talking to each other. Looking for the same colored shirt and going to that person in a hurry and asking questions to fill their charts made a lot of conversations in the Civil Auditorium which expressed a usual component of real Gavel. In the end, the winners were lucky enough to win Gavel Tshirts. 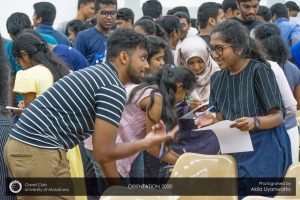 Next, the stage was taken over by a very well experienced public speaker Chathumi, who gave a presentation about the Gavel Culture. She spoke of all the joys we have at the meetings and all the moments we celebrate, and the outbound trips, competitions, and themed meetings were special among them. That is one instance where the newcomers understood that gavel is not only about speaking but also enjoying the moments with friends. As usual, she elaborated her message to the audience very well on what Gavel means to her. 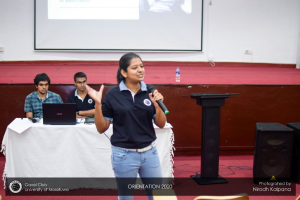 Later on, our active member Madushika was invited on to the stage to talk on her topic “Peaceful life”, which was expanded with the story of a fight which she had with her sister for 4 years over her books and a piece of advice which was given by her father which says 80% of the problem can be solved by changing 20% of our behavior towards the problem. That quite useful point gave a thought to the audience to have a peaceful life without pointing fingers on each other.

After that Bhavan who is very well known for his controversial opinions and for being blunt and to the point came on to the stage with his magic pen which made him pass all his exams. He started talking about his pen while creating a curiosity among the audience. The audience was high in attention with his stories about the pen and the way how that magic pen made him get very high marks in exams. During the speech, he did an auction for the pen too. Finally, the pen was sold to Isuru. It should be remembered how energetic his speech was and how his voice was so audible to the audience where he didn’t have to use a microphone. 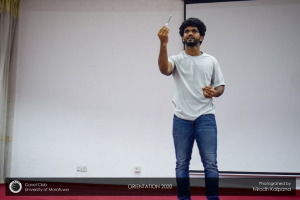 Amidst all those sessions since still newcomers were unaware of a real Gavel meeting, in order to provide a brief idea on those, pocket meetings started with colour cards assigned to each existing member of the club. They were already distributed at the registration desk to Amaya, Chathumi, Malithi, Chamuditha, Nirodha, Navodi, Senali, Akmal and Nikhila. The audience was divided into each member in such a way according to the colours to add colour to the colourless images in their minds about Gavel. Akhila & Randula supported these sessions. Everyone actively engaged by speaking in that session and shared their honest and valuable opinions on different topics. That moment expressed there will to come out of their comfort zones and face the fear in their mind and choose Gavel as the place where their fear becomes a passion. 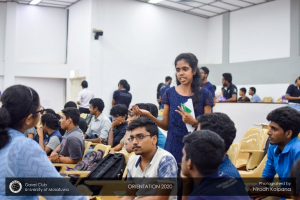 After that, the stage was taken over by one of our past presidents, Merl Chandana who showed up especially for the event to support us by delivering the Alumni Speech. He captured the attention of the audience by starting his speech with a story of a fish that is living in water and getting adapted to different situations in its life which is full of unexpected challenges. He beautifully crafted his wonderful speech with some quiet moments, curiosity and very effective language. At the very end, the message he conveyed was about to maintain adaptability in the flow of life. 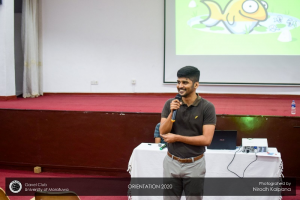 Finally, the day came to an end with a wonderful video that compiled the amazing memories of the Gavel family, especially the outbound trips, special meetings and the challenging speech competitions with some funny photos of the members which captured the fun moments in their Gavel journey. In the end, to capture and save the celebrated moments of the Gavel orientation, everyone joined in the Civil auditorium for photographs eagerly. That’s when the orientation Program of the Gavel Club came to an end making the newcomers realize that Gavel is the place where fear becomes passion! 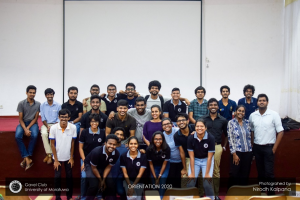