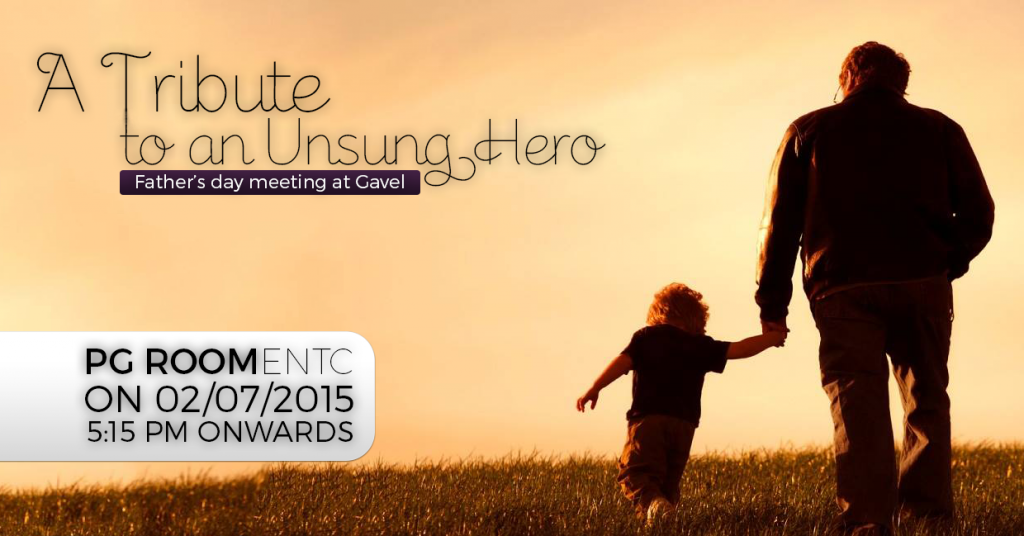 A few weeks ago, Malith Jayaweera sarcastically stated that Gavel discriminated men and questioned how Gaveliers could forget fathers’ day while they extravagantly celebrated women’s day and mothers’ day. Thus, after a marvelous historic 250th meeting, the 251st Gavel meeting was held on 02nd of July 2015 under the theme of “Fathers’ day”

The day started with the national anthem led by Kithmini Senevirathne. Our respected president suggested that the national anthem should be sung “loud and proud” to pay tribute. He is a person who wants progress in each and every minute as well as overall progress.

Then the person who gave rise to the fathers’ day celebration was honored as the Toastmaster of the day. We had an awesome Round Robin session under the topic “What would be your 3 wishes if a Genie comes and asks you on fathers’ day?”  As usual Gaveliers enthusiastically shared their wishes for them and for the benefit of world. The session was funny, strategic, and emotional.

Then the control of the meeting was handed over to Sachithra Pathiraja to conduct the table topics session. He came up with 11 fabulous topics having the essence of tribute to an unsung hero.

During the session many emotions were vocalized under each topic. It consisted of some mesmerizing precious thoughts and stupendous messages shared by speakers. Some of them are:

The color of the room changed with respect to the words of people, both cheerful and remorseful… Some paid tribute while some regretted for the mistakes they made and some portrayed the past fruitful memories with their father.

Then the speakers were evaluated appropriately. “The stories presented should be related to the topic and try to bring a peculiar theme to the story; then only it emphasizes your own speech under the same topic.” Those were the two notable suggestions given by the evaluators.

Then the control was handed over to the Toastmaster. The Grammarian’s report given by Vibhanu Arachchige was unique from the previous sessions. He pointed out the best phrases used by speakers and the wrong usage of grammar as well with respect to the standards. The Toastmaster emphasized the audience to follow that style of grammar evaluation.

At last we were informed about the registration to Speech Olympiad and about the workshop which was going to be held by Mr. Sandun Fernando on 6th July 2015.

After two hours during which all four seasons of life were brought alive while evoking the paternal spirit on each Gavelier, the 251st meeting was adjourned.

The role players for the day

Word of the day: Extraordinary