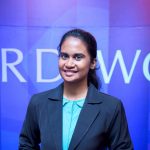 Acting out the true meaning of this quote by George Bernard Shaw, the President, Merl Chandana, called the 288th Gavel Meeting to order amidst many difficulties. There was evidence that a new venue or the upcoming examinations were not considered as obstacles to follow our passion in speaking.

After the role players were introduced, Dinuka Salwathura, who is known as a “very international person”, welcomed us to the Gavel meeting as the Toastmaster for the day.

“If I could go back in time what would I do?”, was the topic of the Round Robin session. The gathering poured out their ideas on the topic. It was amazing to find out that many speakers were completely satisfied of what they have experienced and didn’t want to change their past. Of course there were many regrets that the speakers wanted to go back in time and change. The amusing fact was that many of them wanted to change their currently attending departments and faculties!!

“My neighbour got cable TV in 1998” Sameera began his speech. We were wondering what he was going to say and then he twisted the story to football and then to his passion for the game. It was motivating to find out that he is grateful for all the experiences he gained amidst the numerous heartbreaking failures.

Then our enthusiastic Gavelier Kasun began his speech about his experience at the recently held Gavel Conference. He elaborated how a simple apple on a tree became his speech to aim for the cup. He said that through this amazing experience he had finally understood that the destination is not what matters but the journey.

Mr. President then started his speech with a dramatic beginning as always, attracting the house. He talked about how flashbacks of  disastrous experiences in the past could ruin your today and tomorrow verifying the fact that some old wounds never truly heal.

Roshan made his first speech at Gavel talking about the difficulties a person could experience in life and the art of overcoming them with hard work and dedication.

“What are the nine ways of not winning a speech competition?” If you need an answer, then Malith is the one to consult. He articulated a very optimistic idea about losing and the value of trying.

“Look at our surroundings, everything around you has made what you are today” Sandaru Karunasiri spoke on how he transformed, from a boy who had no concern on education to what he is today. Trying to heal your old wounds will enable you to start a new life was the gist of his speech.

Next the Toastmaster himself presented his speech and gave instructions on how a person should dwell like a butterfly in the society and how one should sting like a bee to extract their needs from the society.

“Push your limit instead pushing you to your limit” Timal wisely and very creatively made full use of the topic itself to theorize the importance of trying hard to achieve something.

Himesh being a passionate lover of the super hit TV show “Game of Thrones” made the proposed topic his luxury and gave away an amusing speech. He pointed out how the characters in this game were equivalent to the people in real world. “What character am I?” was the last impression he left lingering in my mind.

Then came the most enthusiastic Gavelier I ever met in my life. Rochelle Silva recalled her memories from the Gavel Conference and her past experiences at speech competitions. “The events and situations in life may push you beyond your limits but facing them is the real battle”.

Next Shenali spoke on making the best out of painful situations, comparing the scenario to a lemon tree. “The first cut may be the deepest but when life gives you lemons we should somehow make lemonade”.

The very successful Table Topic session was followed by the reports of the Timer, the Ah Counter and the evaluations.

There is a saying- “Let the good times be never ending”. But it was time to drop the anchor to yet another momentous evening. Thus, the 288th Gavel meeting was adjourned on an exciting note to have the next Gavel meeting in collaboration with the experienced Toastmasters of our university.

Word of the day

“Momentous”: of great importance or significance