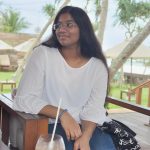 The roar of the crashing turquoise waves subsides, giving way to the warm glow of the setting sun, glistening upon the tip of each gently rolling wave, creating dazzling little pinpricks of brilliant white. Hues of purple, deep blue and cyan with hints of vibrant orange decorate the horizon as the swaying palms, strung with fairy lights, rustle in the soft breeze.

A perfect evening for a very special occasion, indeed.

The 450th Meeting of the Gavel Club of the University of Moratuwa commenced with enthusiastic greetings of “Aloha” on the 16th of October precisely at 5.30 p.m., a little later than the usual 5.00 p.m. meeting, which did cause a little bit of confusion, with regular latecomers turning up nice and early! Even though it took place online via Zoom as per the new norm, everyone was on the sandy shores of Hawaii in their minds. Donning Hawaiian prints accessorized with brightly coloured flowers and stylish hats (and some of us discovering the joy of Zoom filters for the first time), the Gaveliers had dressed to impress, looking forward to a wonderful evening after a stressful week of lectures, quizzes and assignments.

In keeping with tradition, the meeting officially kicked off with the president, Dinidu Edirisinghe’s opening remarks.

“Ohana means family. Family means nobody gets left behind or forgotten.”

With those words, the newbies were welcomed into the ever growing family of Gaveliers, after which the Toastmaster for the day, Shimzara Zakariya, was introduced.

450 is a significant number; a milestone, in fact! This was a perfect opportunity to take a walk down memory lane and cherish the little moments that made Gavel Mora what it is today. A compilation of photos from past Gavel events, in the form of a video, was a sweet recollection of good times for some, and a glimpse of what Gavel Mora was, is and will continue to be, for some of the newer members who have not even set foot on university premises, let alone experienced a physical Gavel meeting or event yet. Whichever category one belonged to, the video left a smile on all participants’ faces.

With everyone’s memories revived, it was time to step into the round robin session. Being asked to choose one favourite memory out of many can be very tricky, but everyone eagerly shared their most memorable Gavel moment, one by one. For many, it was their first Gavel meeting, reflecting on how far they have come since. From Valentines to April Fools to an amazing committee that goes the extra mile to make everyone feel good about themselves, Gavel Mora had left everlasting impressions on the minds of all members with so many stories to tell, if not for the warning sign of red on the Timer’s screen that always seemed to appear too soon!

No beach party is complete without music, and the 450th Gavel meeting was no exception. Two talented Gaveliers, Namina and Imanthi, stole the show with their melodious voices and expert guitar skills, having the rest of us singing along to two familiar Lankan hits (with our mics on mute, of course!).

As the applause died away, the Table Topics Master, Hasali, was introduced, marking the start of the Table Topics round. Being a special milestone meeting, the Gaveliers did not have to worry about their “ah”s and “erm”s this time, and there were no surprise topics or evaluations; it was simply an opportunity to reminisce and rejoice.

The Table Topics were as follows : 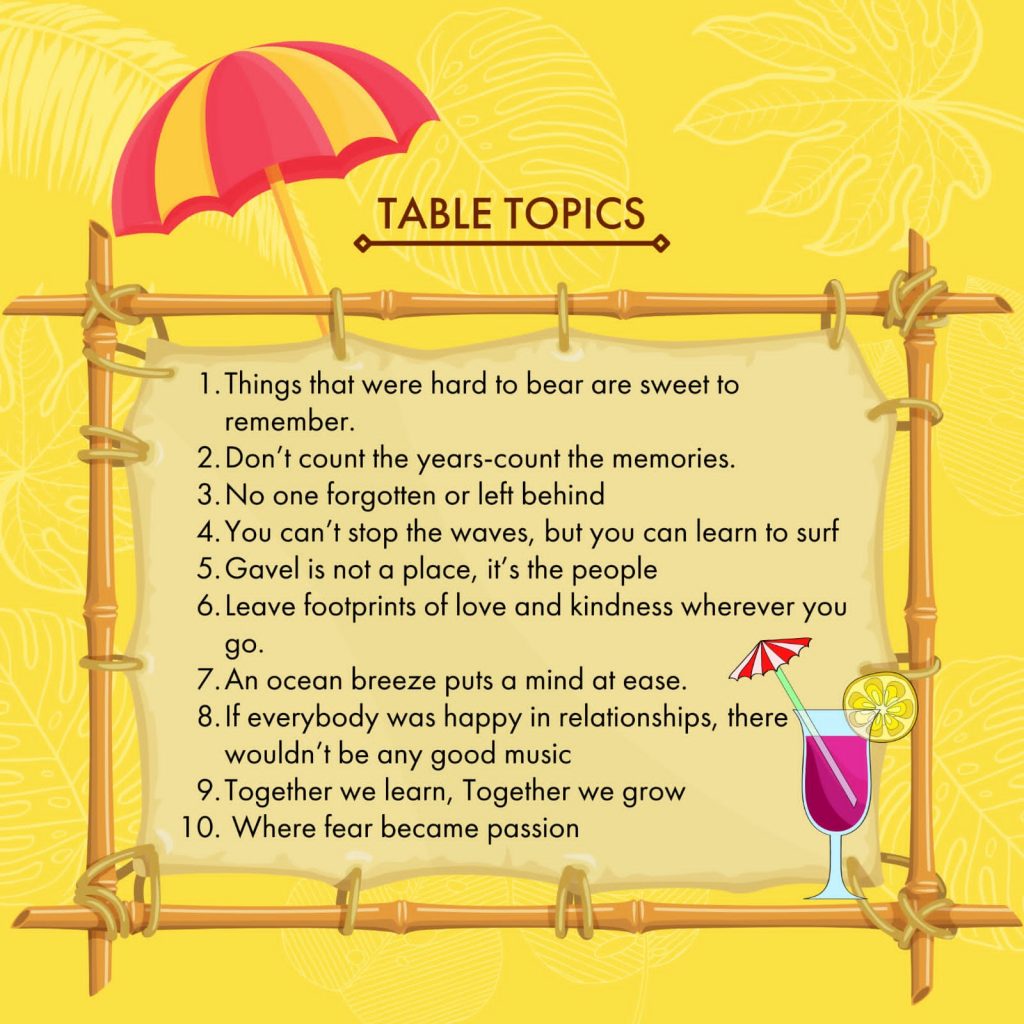 We have spent almost two years at home, in lockdown for the better half of the period, yet the memories we made, albeit virtually, outweigh the negatives of the whole experience.

This uplifting point of view from Madhushika set the ball rolling, whereupon many Gaveliers, both veteran and new, spoke on their chosen topics. Most of the speakers chose to elaborate on their favourite Gavel memories, since the limited time of the round robin session was clearly not enough to cover every little detail.

While Gavel was the encouraging nudge for many to let go of their fear of public speaking, for Nethma, it was something quite different; Gavel made her realise that she was ace at dancing in public after a *forced* performance in front of all the Gavel clubs of Sri Lanka!

More proof that the Gavel family supports one another in more than just speaking, is how an angel (a male one, a.k.a Chamuditha) descended upon Paul, a straight A student, to help him cope with the crippling paranoia of having to repeat one module.

Geethma, on the other hand, had found the courage to turn her camera on more often at online meetings with the help of her mentor at Gavel – something she had been terrified of doing in front of strangers before!

Savin gave testimony that “no one is forgotten or left behind” at Gavel; after the semi finals of SO XIV, he found his inbox full to the brim with encouraging messages and feedback from seniors, not giving him much of a chance to feel bad about not making it through to the finals.

Putting into words what almost all of us feel about Gavel, Dulmi likened Gavel to a soothing ocean breeze, blowing all of life’s stress away.

There are good accidents as well as bad ones. In Namina’s case, his “me” message at his very first table topics session, which he was planning on sending towards the end, accidentally made him the second speaker of the day. Now, that was definitely a good accident, for he never missed out on the chance to speak at a table topics session thereafter, also learning along the way that combining his biggest strength of being able to sing together with public speaking was “next level”!

The biggest surprise came when Chamode, an alumni member now residing in Canada, staRRRted speaking, revealing his newly developed accent with some magnificent rolling Rs! (Which he claimed he was not aware of at all, until the chatbox erupted with genuine astonishment.)

Highlighting the importance of turning our backs on negativity and opting for love and kindness instead, Arani gave us an account of how seeing a random person sharing a lunch packet with an old lady made her day.

While the world suffers under the weight of Covid, the realisation that it is the little things that mean the most, was made clearer than ever after hearing each inspiring story.

What use would it be to put all that effort into dressing up and not have a picture to look at later and let the nostalgia hit hard, perhaps at the next milestone meeting? After much debate on how to pose, the group photo was taken, thus concluding a glorious tropical evening by the sea. 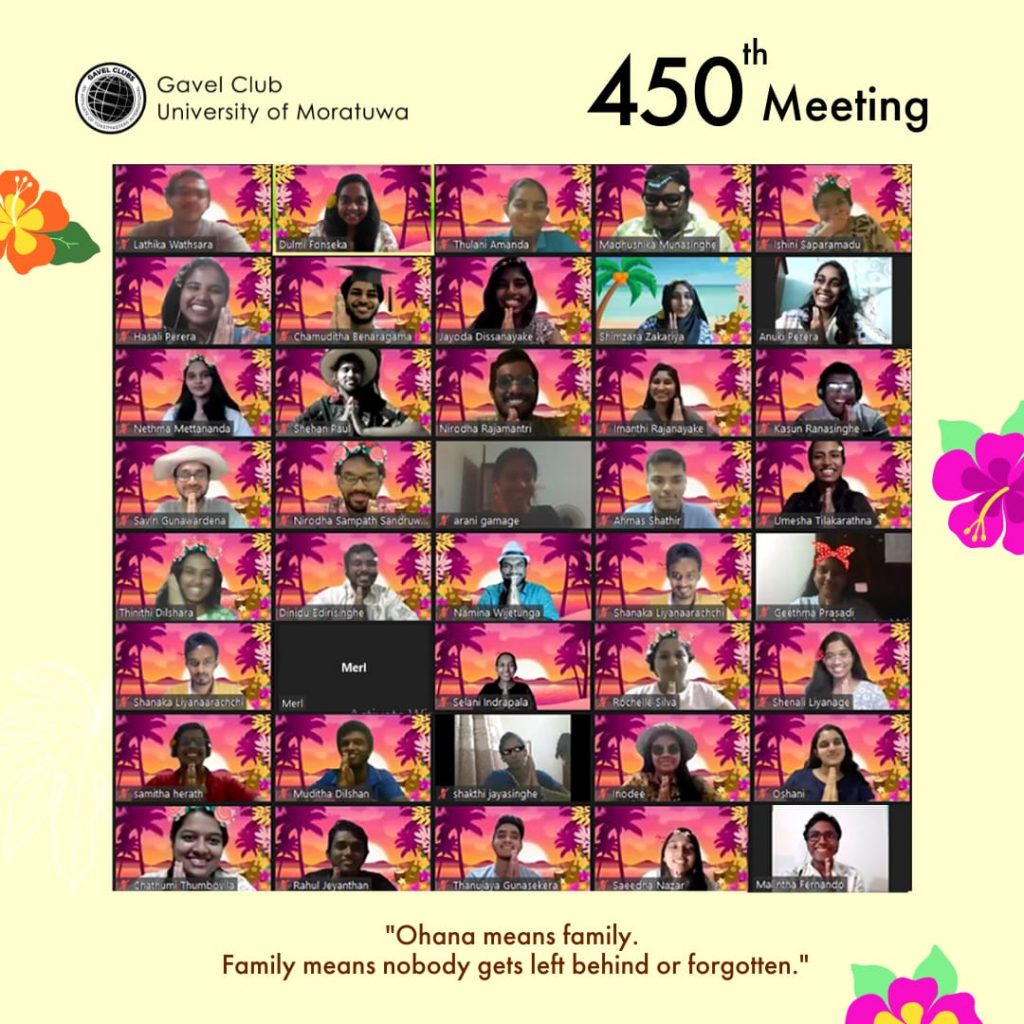