The WhatsApp group for the Gavel Club Notices flickered with a new message that read, “Believe not the lies they tell you. Trust not the things they show you.” An invitation to the April Fool’s Day themed meeting on Thursday the 1st of April 2021, which seemed quite odd given that the virtual meetings usually happen on Saturdays. That message itself left us with the question, “To believe or not?” because in all fairness, it was perfectly aligned to be a prank. However, the deviation from the usual day turned out to be an insightful decision taken by the board members to enjoy the Gavel Meeting with full effect; What better day to have an April Fool’s themed meeting than 1st of April itself?! Just so it happened, many of us were not reluctant to believe the invitation and as a result the virtual meeting was full of enthusiastic Gaveliers waiting to fool or be fooled. As the meeting unfolded, it became evident that there could not have been a message more apt than “Believe not the lies….” to describe the meeting – here’s why;

The meeting was called into order by the President Dinidu who wished everyone a Happy Birthday and moved on to introduce the Toastmaster of the day along with a story about the time she was pranked. Dinidu handed over the controls to Zafra, whose brother had made her believe that the reflection of the sun on water was electricity and scared her from touching glimmering water for a good part of her childhood. 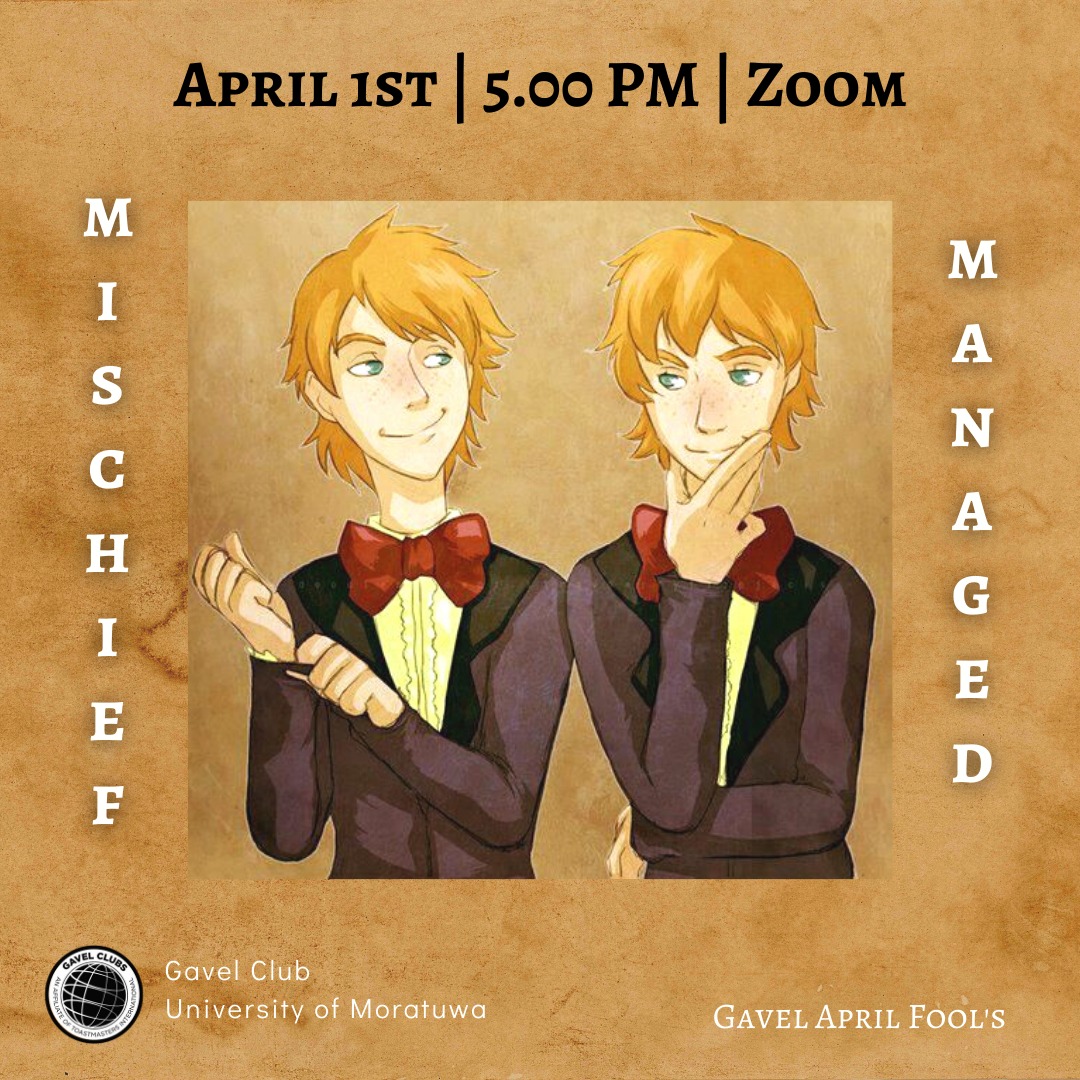 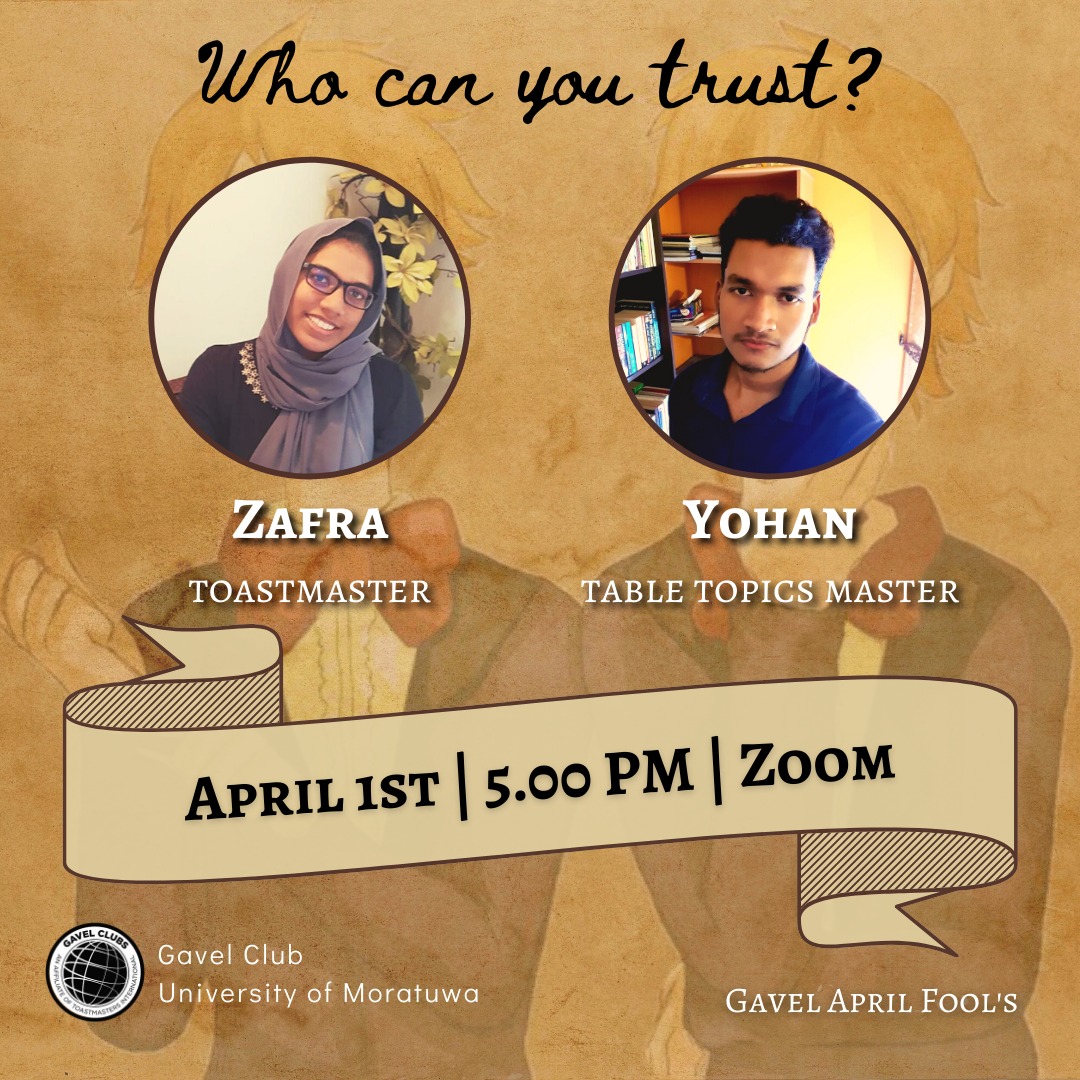 After briefly taking us through the history of the “April Fool’s Day”, Zafra took a moment to recognize and honour the presence of Dr. K Surya Edirisooriya, a senior lecturer from the University. Following which, she introduced the role players of the day with stories of how they were pranked. The table topics master was Yohan, the timer was Lathika and the Ah-counter was Joel. The Grammarian was Malintha, the word of the day was ‘Quip’ and we were in for a quippish meeting.

We never realise how creative we can be, until we get late for a lecture and end up having to explain why we got late to the lecturer. The reasons lie in a spectrum that varies from the most rational to the most bizarre, but what’s important is that we make the lecturer believe whatever we say. This is what the Round Robin session was about. Each speaker, within the 20 seconds they got, had to speak about the excuse they would make to the lecturer if and when they got late to a lecture. Dr. Edirisooriya decided to partake in the session by giving out his judgements in the Chat Box, for whatever reasons the speakers came up with.

Quite serious stomach aches, tragic accidents such as road collisions or being chased by dogs, honest accidents such as oversleeping or forgetting proper clothes and even being infected by the Coronavirus were some of the reasons vividly explained by the bunch of “late students” at the Round Robin session. Dr. Edirisooriya was evidently taken aback by some of the excuses he had just heard and he specially wanted to congratulate Niruthikka whose excuse he believed would fool most of the lecturers. (“Excluding” himself.)

The Table Topics session was a mix of two worlds. The speakers could either speak on one of the six topics related with the theme, or give a sales pitch on one of the five most perplexing products ever. 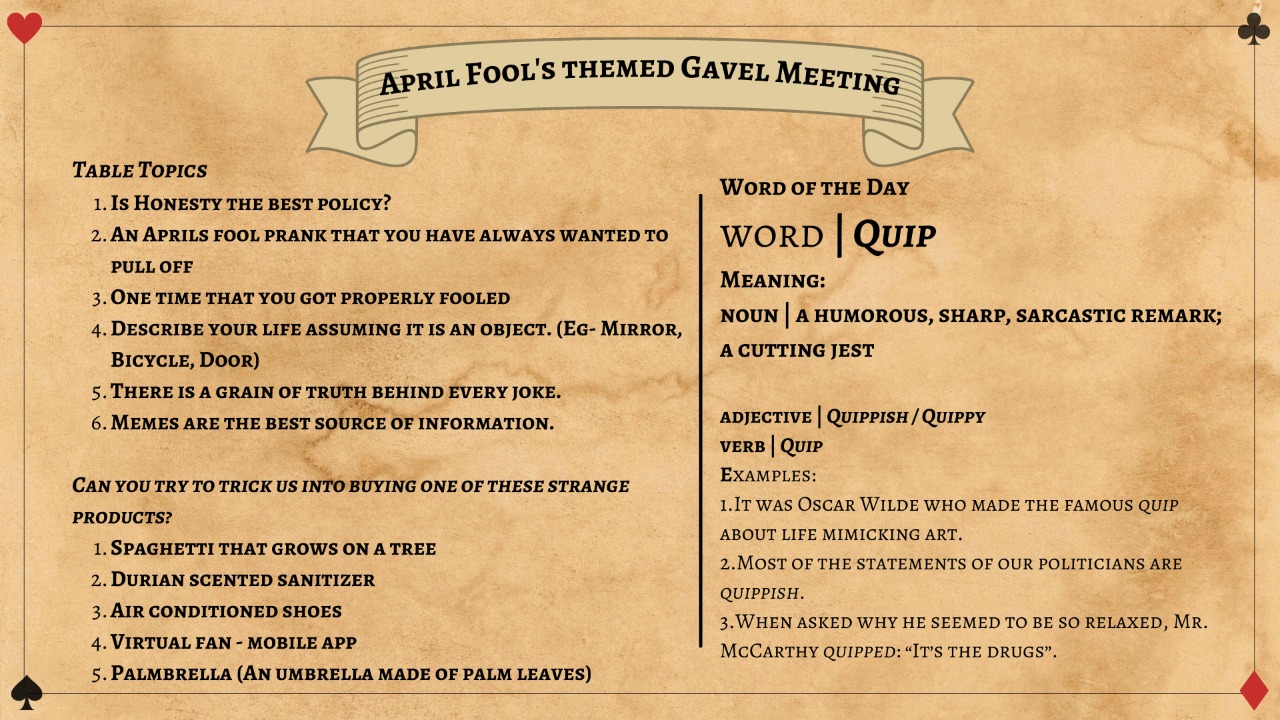 Dinidu gave a kick start to the session by advertising his virtual fan which, unlike the conventional ceiling fan, would never fall and harm you while you’re asleep. “What is it that you value more – A safer sleep or a less-sweaty sleep?” was his question to us. Layani spoke next, about how she was asked out by her crush, which unfortunately turned out to be an April Fool’s prank and had the rest of the girls plotting revenge in the chat box. Then came Viraj who partially agreed that memes are the best source of information.

Lathika pitched for his state-of-the-art Air Conditioned Shoes which would also tickle our feet. Rajith followed and advertised his Dooriyan Sanitiser made with the special chemical “Gandaskarans Duriyans” which he guaranteed to help you secure your crush. Next was Madhushika who spoke about how her father has been the biggest prankster in her life and how she finally managed to retaliate with a prank on him.

It was time for another Dooriyan Sanitiser sales pitch by Niruthikka who was certain that it would be our saviour in crisis because the scent would repel the virus itself. Dulmi introduced us to her (mind bogglingly expensive) Royal Spaghetti Plant which not only grows but cooks the Spaghetti for you. However, you have to provide it with the right nutrients such as spaghetti sauce and olive oil. Hemashi attributed herself to a car and spoke about her life and about the family which owned the car that embodied her.

Zafra’s advertisement carried a personal touch as she spoke about her mother’s delicious spaghetti dish and how a spaghetti tree would save her from her biggest fear of running out of spaghetti at home. Kaveesha believed herself to be a mirror and reminded us that we must embrace ourselves and reflect who we truly are. Paul made a compelling sales pitch on his Dooriyan Sanitiser as he mentioned how the pungent smell would prevent us from bringing our hands close to the face unlike the fragrant ones.

Chamod introduced us to his high tech, advanced, efficient and affordable Air Conditioned Shoes, hinting competition to a previous speaker. The sense of competition increased as Maduka Dilshan, a newbie, advertised his “MD Original” spaghetti tree seeds which not only come in various tastes but also with good discounts. Thinithi stepped out of the competition trend and spoke about using white lies where appropriate and being honest where it is important.

Charithma with her adept advertising skills, promoted her virtual fan called “Virtual Breeze” which would save money, time and space. Prabash unwilling to back down, followed by introducing his customisable virtual fan which would cater to all the aesthetic needs of the consumers. Last was Gayumi who spoke about how she was pranked with a false injury of one of her friends, all because she forgot that it was April Fool’s Day in the heat of the moment. Both Prabash and Gayumi were newbies as well.

Since the plan was to not have the Table Topics evaluations nor any prepared speeches, after the reports of Timer and Ah-Counter, it was time for an April Fool’s Story Telling Game, headed by the 3 game masters Yohan, Saeedha and Savin. Everyone was separated into 3 breakout rooms with a game master for each. The participants within a particular room had to contribute with at least one sentence, and build up a story about a prank being pulled. 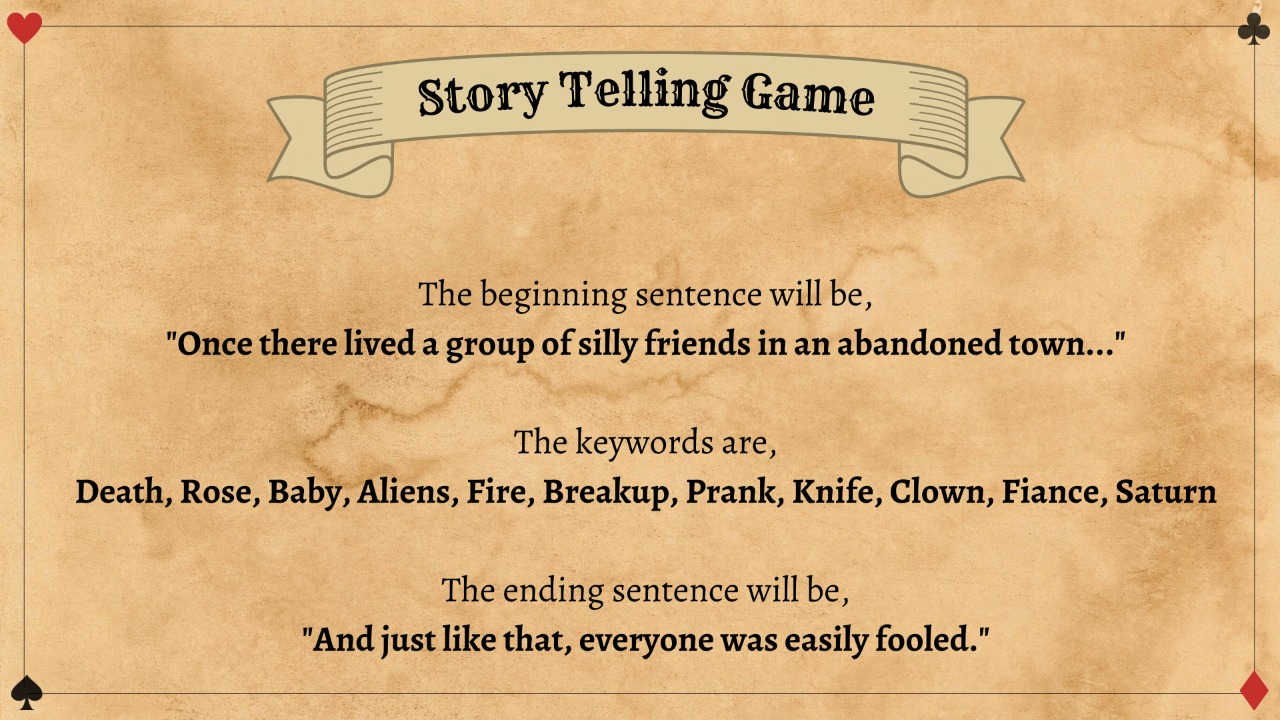 The beginning and ending sentences as well as some keywords were given to spice things up. After spending about 25 minutes in the breakout rooms, everyone was back in the main room and the 3 groups from the 3 breakout rooms recited their stories. The summaries of the stories are as follows,

Yohan’s Group: Rose, a young girl who falls in love with a man from the neighbouring village, finds out that he’s an alien. Unwilling to go back to his home planet, she jumps into a huge fire making the witnesses believe that she died, but later appears as Rose in the movie “Titanic”.

Saeedha’s Group: A married alien from Saturn turns down the request of a girl from Earth. However, when he is widowed, the girl from earth proposes to him in an improper manner enraging him. A boy whose love interest happens to be the girl, tries to win her back but ends up killing her. Eventually, it’s found that the alien is infact a clown in disguise.

Savin’s Group: An alien in disguise of a girl is captured while running away from a town and taken back to Saturn. As her friends from the village see the events unfold, the space ship bursts into fire. Although the friends believe everyone on the ship to be dead, the girl uses her powers to bring everyone back to life.

These summaries don’t do enough justice to the amount of creativity and quip encapsulated in those stories, you really had to be there.

Like all good things, the meeting was nearing to its end. The immediate past president of Gavel Mora Amaya and veteran member Chamuditha who joined the latter part of the meeting were exhilarated to see many new faces from the 2020 batch and engaged in a pleasantry with them.

Regardless of fooling others or being fooled by others, everyone was in elation as the President, Dinidu adjourned the 431st Gavel meeting. As for the mysterious lecturer Dr. Edirisooriya, who was keenly listening to the excuses in the Round Robin session – Is he real? Is he not? We would never know. 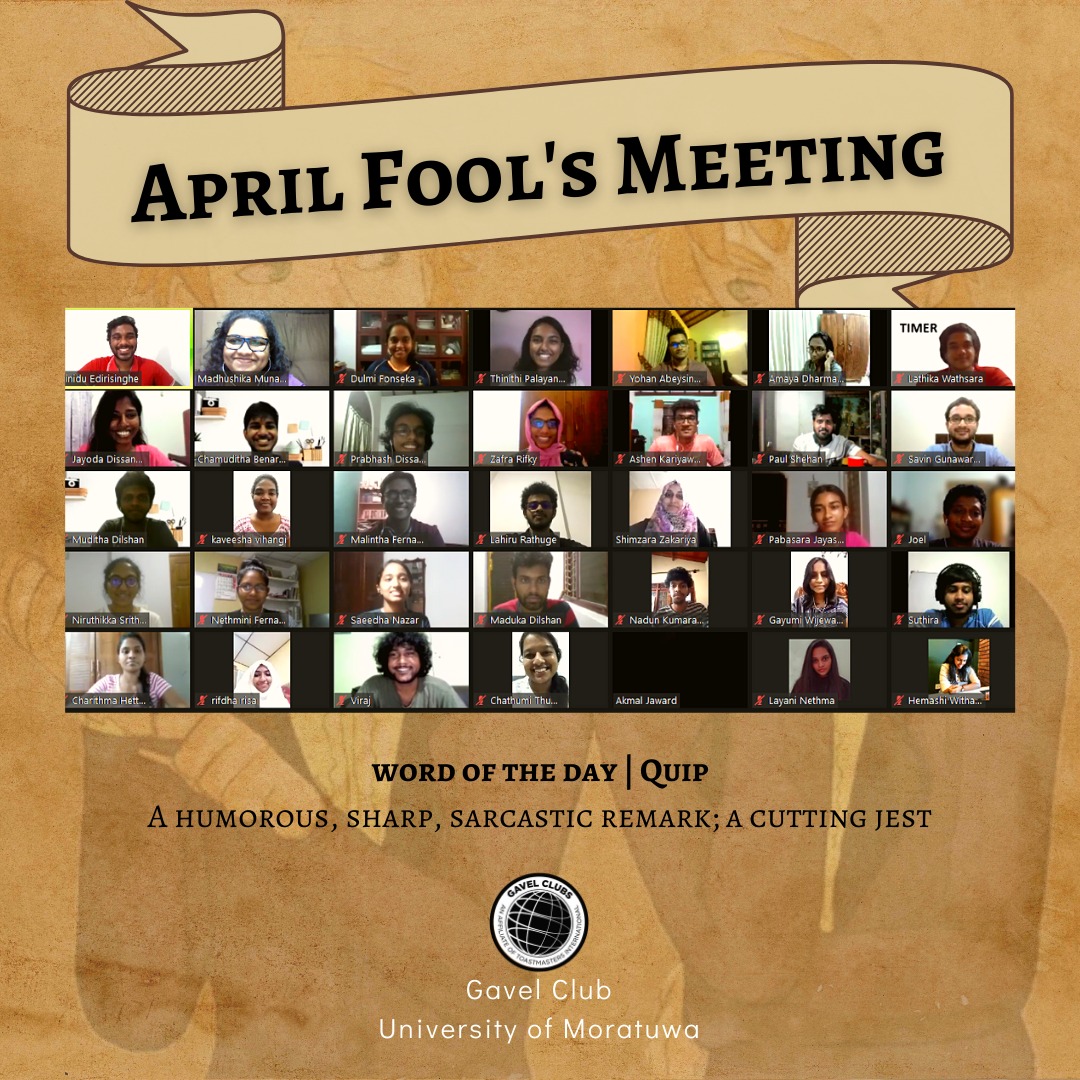