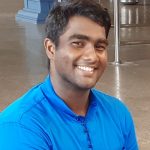 The excitement began on the 12th of January when our own Gavelier Jayoda sent a message on our WhatsApp group with “#physicalmeetup” and “#outdoormeeting”. The group went wild as the members hadn’t seen the others in years and most of the newbies had never seen the others at ALL. After a long and quiet wait, it was confirmed that the outdoor meeting will happen on the 30th of January at Con Amor, a restaurant by the beach, near Dehiwala-Mount Lavinia. And to make matters more exciting, it was also mentioned that dinner too will be served. For the Gavel club members who have been stuck inside their houses for nearly two years, the feeling was similar to Leonardo Di Caprio finally winning the Oscar. 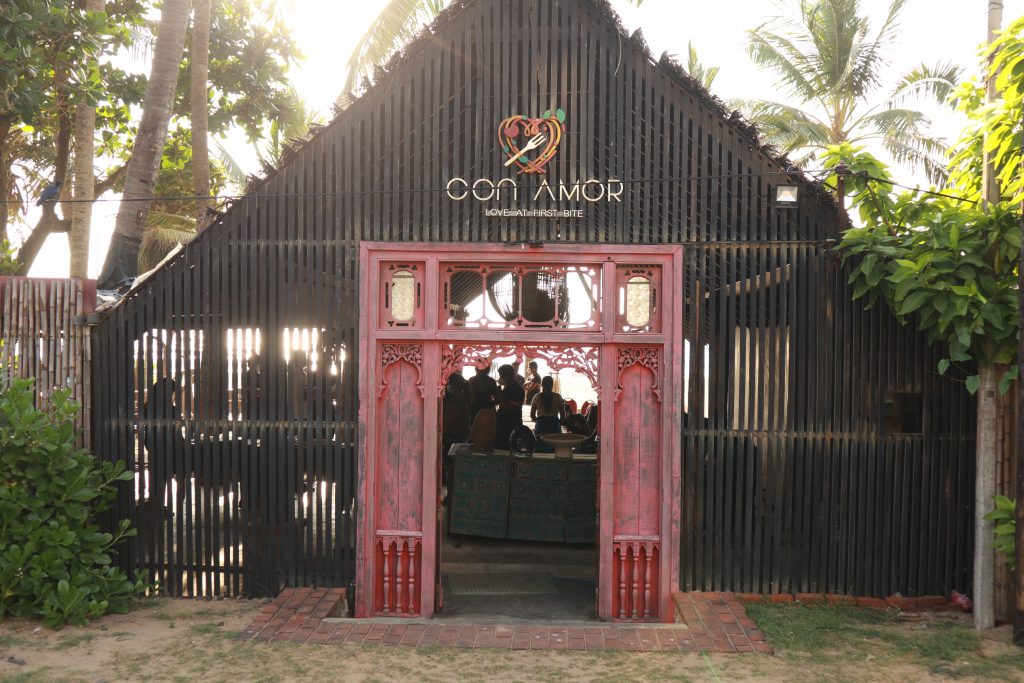 FINALLY, the day arrived. The meeting was scheduled to begin at 3.00.pm. Gaveliers, not being able to control their excitement, turned up early to meet the others. The restaurant was a beautiful place, the sandy beach open for anyone to view whilst listening to the others talk. A cool sea breeze set the mood for a very stimulating meeting up ahead. Our much loved alumni members Merl, Timal and Ushani also decided to join the big and loud crowd gathering at Con Amor, topping off the long awaited family reunion. The president, Dinidu, called the meeting to order by the tap of the gavel and he introduced us to the Toastmaster of the Day, Malintha, and the controls, along with the gavel, were given to the TMOD. 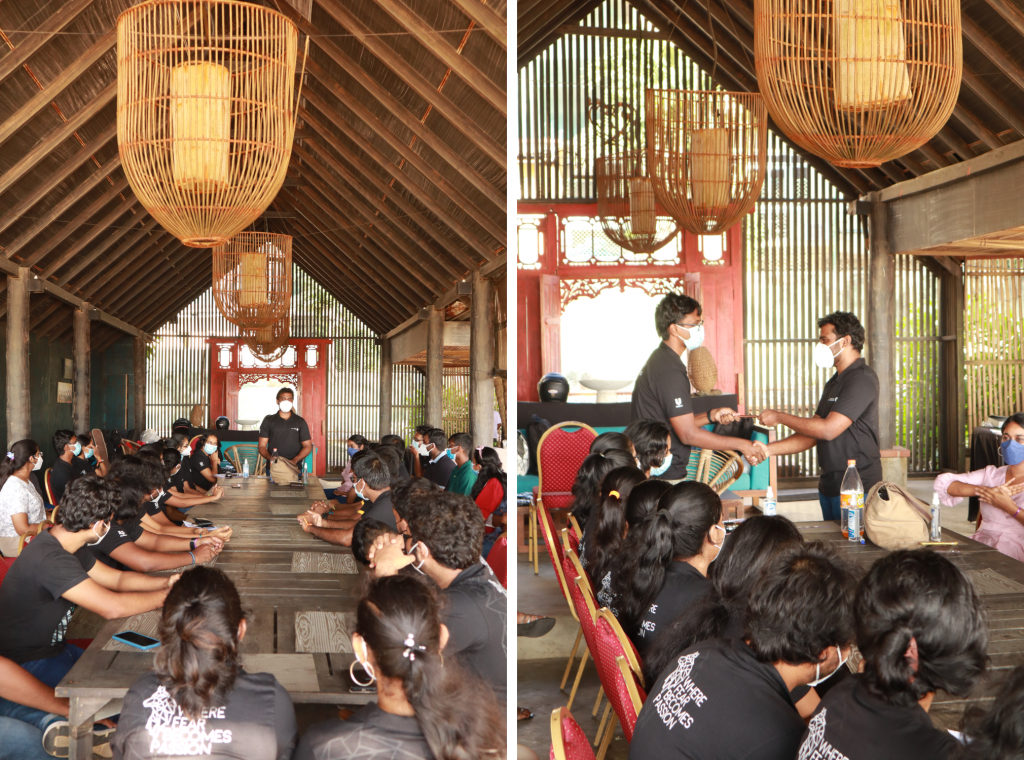 As usual, the meeting started with the Round Robin session. Malintha started the round robin session with a lovely story line. We had to continue the story and make it exciting within the 20 seconds that we got. But Ohhh don’t be fooled because there was a catch. There’s ALWAYS a catch. Each member was given a random word which was to be incorporated into our story. What started as a simple story about a group of friends getting together on the beach to talk, immediately turned directions, became chaotic, full of treachery, bread selling lecturers and rhetorical suspenses involving time travel and evil stepmothers. The story became so complex and thrilling that not even “Tenet” would’ve stood a chance. The “Oohs” and “Aahs” at the sudden twists in the storyline accentuated the mood of the meeting. 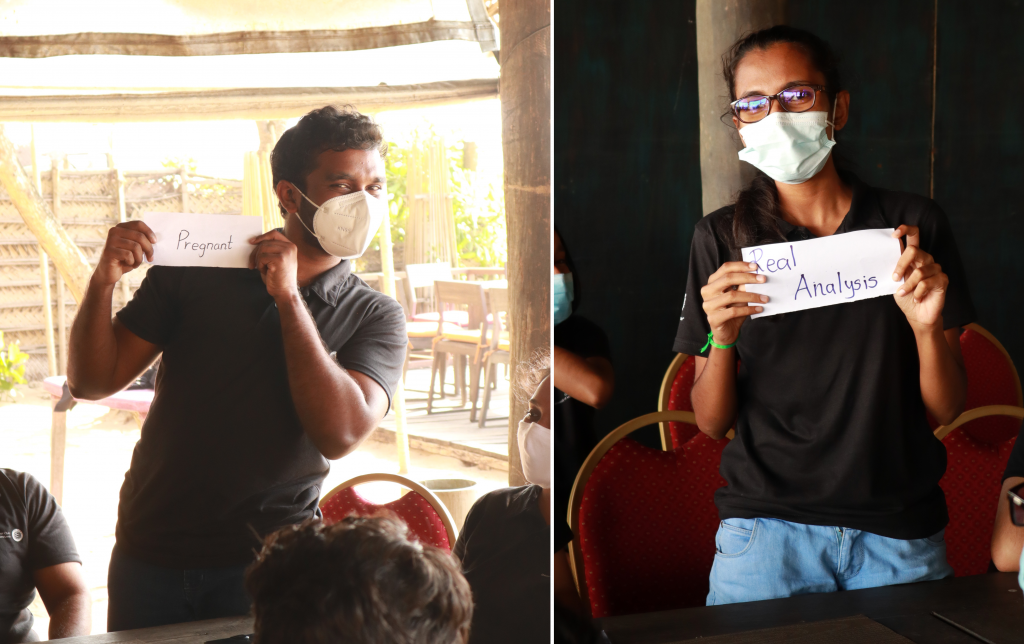 The meeting slowly but with higher amounts of enthusiasm boiling in our hearts, moved onto the next segment. But wait wait!!!. This was a long awaited physical meeting. We needed to spice things up. All the Gaveliers were separated into groups of six-seven and were allowed to compete against another team on a game of charades. The group coordinators who were slightly hinting and giving tips on how to win the game were a huge resource for the respective teams and a huge disadvantage to the opposing team. There were lots of screaming, shouting and clapping from all around the place. The hand gestures and the movements of the players would’ve confused the living bejesus out of a person who knows sign language. Since two players from the opposite teams were made to act together under a time crunch, the competition was so intense that only veterans of the game and the club were able to bear the sheer stress of it. 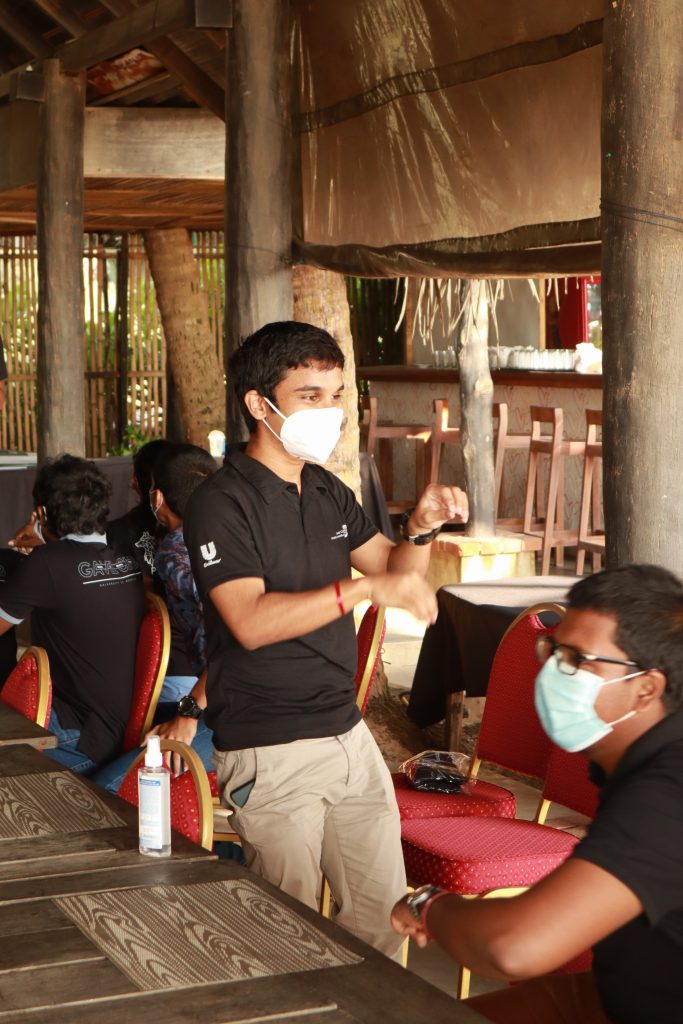 After the intense game of charades, the session went for a short break. Large cakes were brought in and we all huddled close while our president spoke of how the Gavel club was initially formed 17 years ago at the University of Moratuwa by a group of friends who wanted to come together and talk. As no one who was at the meeting were actually present when the club was formed, we had to take the word from Dinidu as a true historical fact and move on. Then the cake was cut while all the members sang Happy Birthday to “Gavel Mora”.  The members then treated themselves to some delicious cake which turned out to be the handcraft of our very own VP Education, Dulmi. With much appreciation for her baking skills, some people went in for seconds, and after much socializing, the meeting resumed. 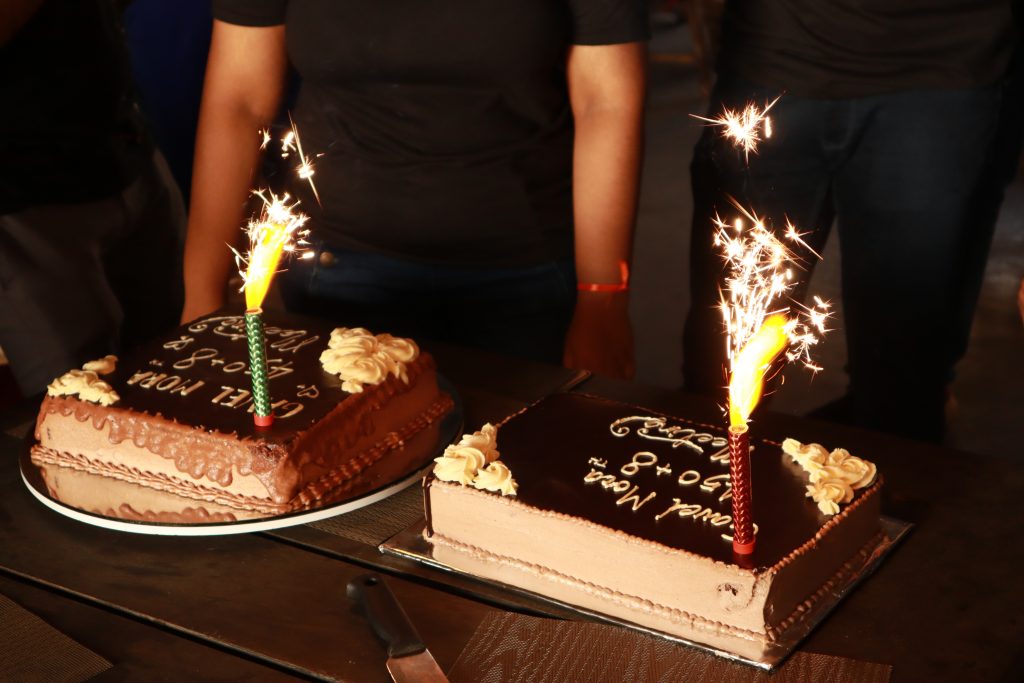 Drum Roll please… Cue the boss music. In rolled the Table Topics session. Now, THIS session was BUSSIN’ bussin’. Thinithi was appointed as the Table topics master, so the gavel was handed over to her by Malintha. The table topics session was modified slightly to meet the expectations and the energy that was boiling in us.

It was a game, where the teams had to make a mocktail out of the ingredients that were available. But not so fast… The winning team with the highest scores for the game of charades got the first pick from the ingredients, something inspired from MasterChef. The supplies were very limited thus, it led to some, how do I put this delicately?…. “unique” creations with very little concern given to hygiene. Fruits were squeezed, tables were messed, ingredients were stolen and drinks were split. In simple terms, the area was a warzone of fruity madness. But HEYYY… where’s the talking and presenting bit? That was the whole point of the meeting right? So, the teams were told that a sales pitch was to be made regarding their creation. 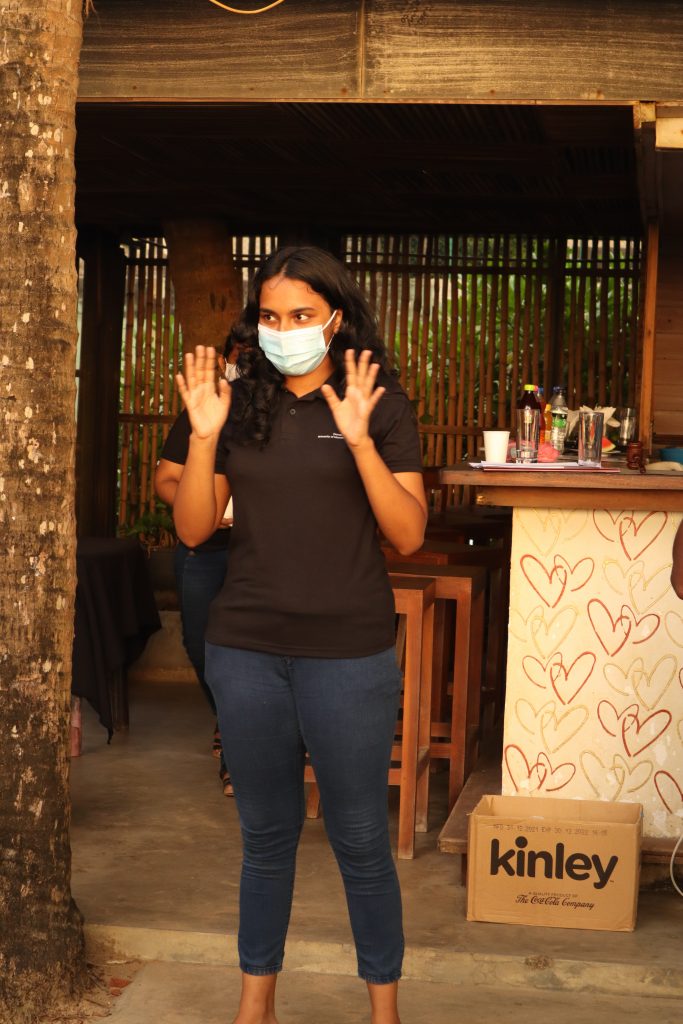 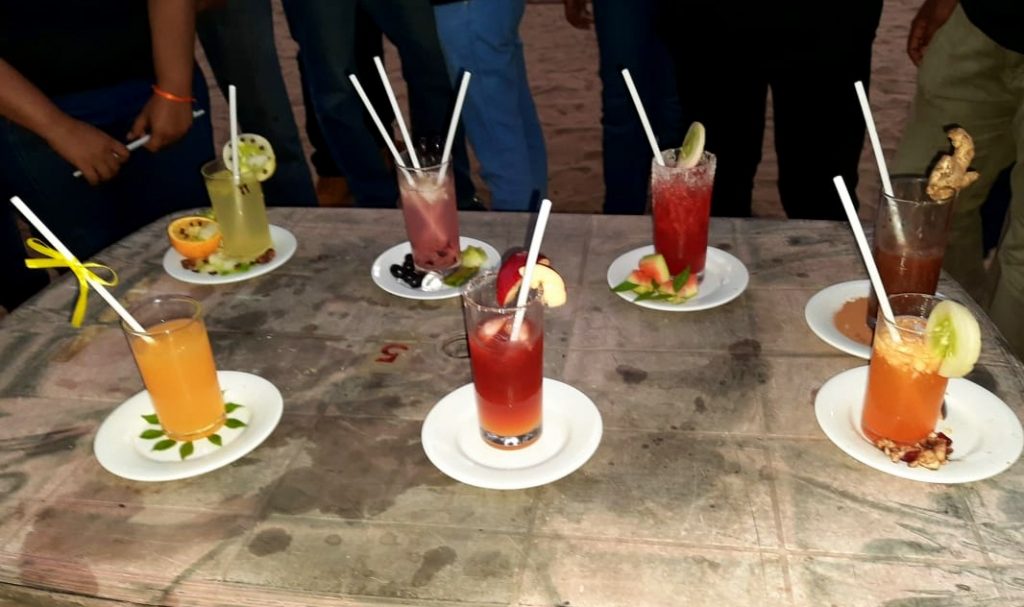 They came up with some splendid on the spot deliveries of comedic sketches and a variety of pitches for the team’s drink, which contained humanly impossible powers, like waking a dead grandma who looked suspiciously well-fed and a drink which was given to humans by the Death angel herself. Keep this to yourself, but one team had a purely yellowish drink which looked EXACTLY like the Sunquick drink that was served to us earlier along with the cake. (Not pointing out that they did something funny, just sharing the facts.) The creativity of the sales pitch along with the quality and taste of the very questionable drinks were graded by the panel of judges which included Malintha, Thinithi and Nirodha. As the night wore on, the competition came to an end. We all gathered around the main table to get the final results of the games.

The game ended with a tumultuous uproar by the winning team, and sounds of boos and jeering from the other teams. Time pauses for a short nap when a lecture begins but flies when you have fun. Malintha addressed the crowd and handed back the controls to the president. Dinidu officially adjourned the 458th meeting of the Gavel Club of University of Moratuwa with a wishful thought that we all would meet again soon.

All the Gaveliers gathered around the table where Namina, Tharindu and Viraj played the guitar while all of us sang some amazing heart touching songs. The soothing lighting and the soft breeze along with the melodious tunes created an unforgettable memory for all of us. With time, dinner was served, and everyone after a tiring but a well spent day, ate hungrily. As all things do, we come to the bitter part of an unparalleled day of joy. It was time to say goodnight and goodbye. But this time, there wasn’t sadness in anyone’s heart while leaving, but hope…. A hope for an amazing future with friends, who we had never known existed till the recent past, but who would light up our whole future with memories which are, and will always be special. 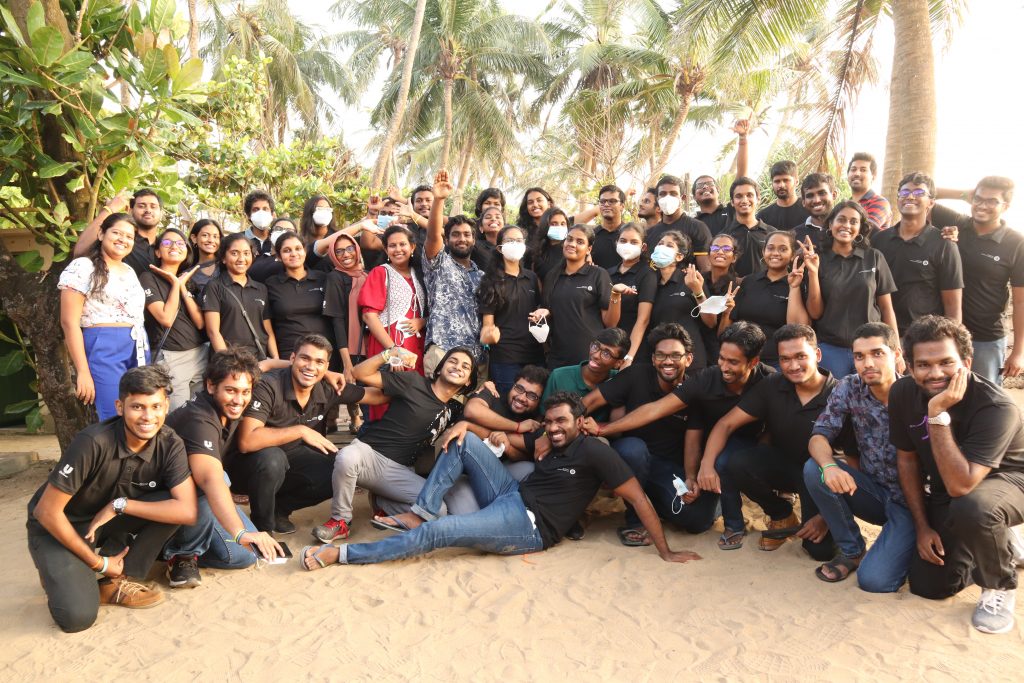