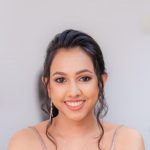 How I wonder what you are

Up above the world so high

What better way to end Eid than to send a form on the Gavel Whatsapp groups asking those who were enthusiastic enough to sign up for a workshop to polish their public speaking skills? The eye-catching flyers for “Dream Big 2021” not only caught our eyes but also captured our attention for there was no mention of who exactly would be conducting this workshop. Finally, after days of suspense, dawned the 24th of July 2021, where, at 6.00pm, close to 70 participants joined via zoom, eager to learn the art of storytelling. 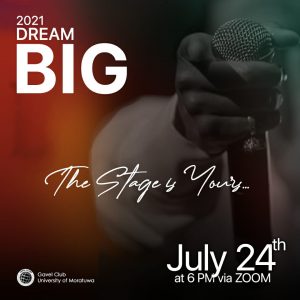 The meeting commenced with Malintha starting off by saying, “Storytelling is the most powerful way to put your ideas into the world today”. Then, without further ado, he moved on to introduce the guest speaker for the day.

“Most talked-about speeches” by Fortune magazine”

When these introductions came up on screen, my heart skipped a beat. The guest speaker for this years “Dream Big 2021” workshop was none other than the legendary Mr. Dananjaya Hettiarachchi.

He started off by telling us that, regardless of the industry, what makes a difference between an average and exceptional leader is the ability to tell stories.

The ability to tell stories, as per Mr. Dananjaya, depends on 2 things;

Moving into the structure aspect, Mr. Dananjaya says, a good speaker would never start off by thinking, “what’s my topic?”, but instead would contemplate on, “what’s my message?” As a rule of public speaking, the speaker should have the ability to summarize the message of the speech to no more than 10 words. Mr. Dananjaya further explained this by taking into account some messages such as “Leaders are not born, they are made”, “A journey of a thousand miles begins with a single step” and “Try, try. One day you can fly.” He even asked one of our own gaveliers, Savin, to make a given intention into a 10 word message, to which Savin successfully replied saying, “A rolling stone gathers no moss.”

Similar to a Ferrero rocher, in a speech, the sweetest part is at the center. That center is the message. Now that we’ve been taught how to get an effective message, Mr. Dananjaya next moved on to how we should structure our speech. A speech effectively has 3 sections;

This is where the concept of framing comes into play. Framing is essentially finding something that is like what you want to speak about. There are mainly 5 frames a speaker can use. They are,

“No one in this world has ever died of a snake bite, it’s the poison that kills you.” –

“Twinkle twinkle little star, how I wonder what you are…”

“A journey of a thousand miles, begins with a simple step.”

Each of these statements or nursery rhymes are followed by 3 powerful questions and that’s it, 40 seconds into the speech, the audience knows what you will be speaking about and you have grabbed their attention.

In order to explain these 4 components, Mr. Dananjaya took into account his own story of getting fired during one of the world’s biggest economic recessions. On explaining the third factor, he even asked our own thoughts on the given advice to which our gaveliers took a keen interest, shouting out answers as funny as, “you get it from your mothers side”, as serious as, “Rock bottom is a great foundation to build upon” and then finally coming up with the right answer being, “Failure is the first step of success.”

Next, after building a brilliant body, we finally came to the point where we concluded our speech. Mr. Dananjaya gives a simple but effective piece of advice. Connect the ending with the opening and leave something memorable with the audience.

Then, Mr. Dananjaya asked our gaveliers for a frame for which he would make an impromptu speech. On being given, “do what you love and love what you do”, Mr. Dananjaya started off with “Eensy weensy spider…”, took us through his story of finding what he loved doing and eventually ending with loving what he did.

Now that we’ve gotten the structure of our speech sorted, we next moved onto the delivery aspect of storytelling. Delivery has only a few main facts that we ought to keep in mind.

The tone and pace we use can help us control the emotion of that which we say. Not so long ago, when technology was yet not developed, cricket commentators on the radio controlled the people’s excitement levels simply by increasing the pace at which they spoke. Similarly, a slower pace would increase the seriousness and gravity of what is being said.

One of the main factors that Mr. Dananjaya stressed upon when it came to pausing was emphatic pausing. In order to stress on a point, pausing must not be done after the point has been made, but rather, before the point is made.

The final point of delivery, stage presence. Before taking up speaking, Mr. Dananjaya used to dance 5 days a week. Without feeling comfortable speaking in front of an audience, a speaker will worry too much about his stage presence and would inevitably mess up the speech.

Apart from these points, there were a few other tips given by Mr. Dananjaya,

And after that very effective session on storytelling, the stage was opened for a Q&A session. Mr. Dananjaya had to spend an extra half hour past the allocated time to answer all questions, but he did so without any complaint and with the utmost dedication and interest.

Here are some tips from the Q&A:

And as the time reached 7.30, the workshop was brought to an end, with Mr. Dananjaya Hettiarachchi leaving us with some final words of wisdom and a big responsibility to use our voices and give some new, right messages. Give the counter narrative, the counter story, be responsible and as twinkle twinkle little star would have it, shine like a diamond in the sky. 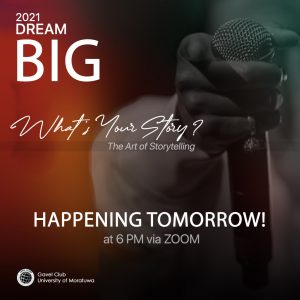