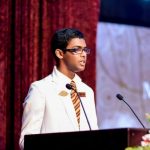 As the clock struck 6.00pm on the 12th of August 2022, the organising committee of Dream Big 2022 opened the zoom call for all registrants. Dream Big is an annual initiative by the Gavel club of University of Moratuwa to share the wisdom of renowned public speakers with aspiring public speakers. 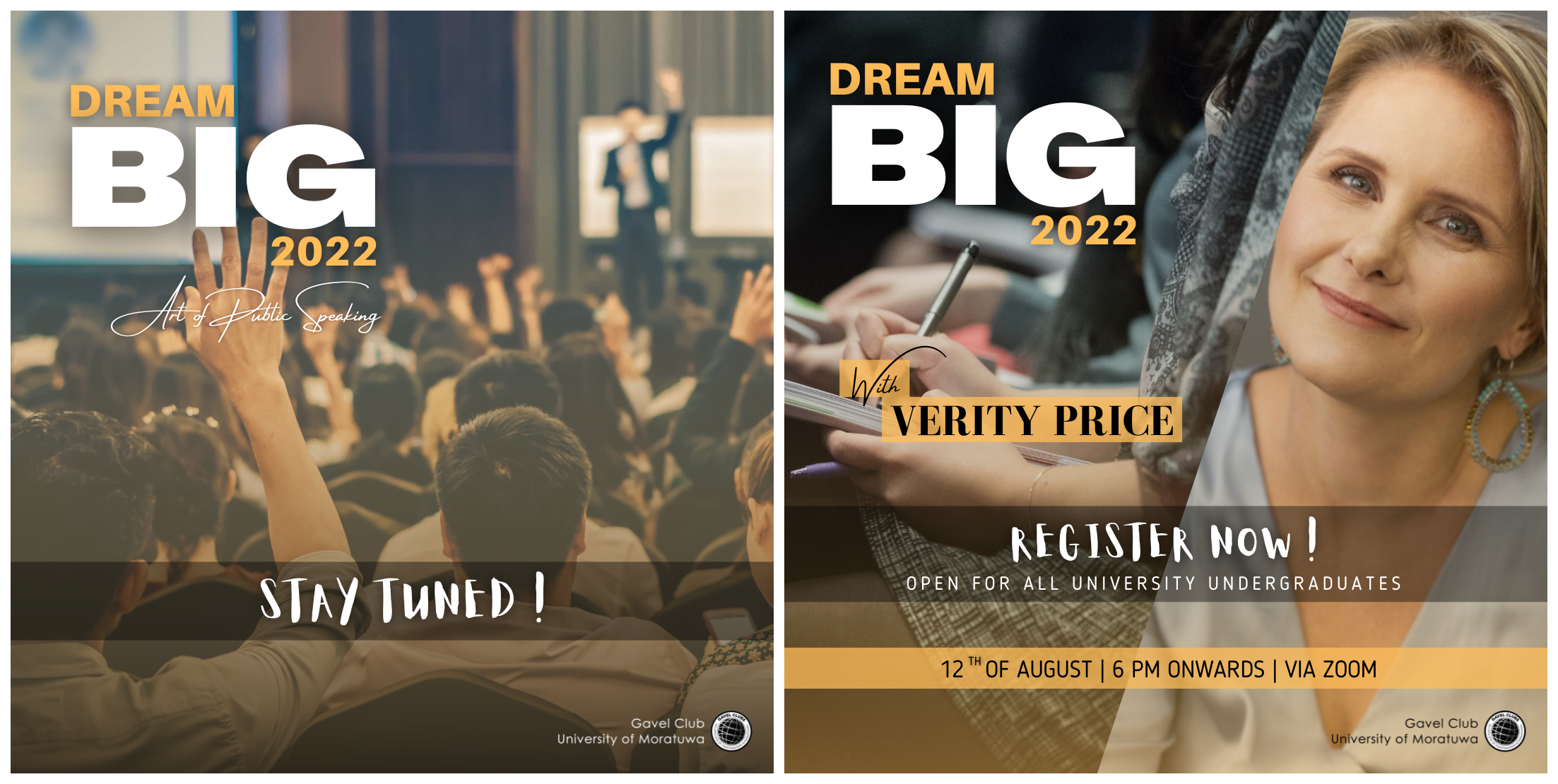 This year, over 300 participants joined in as the session began. The design and marketing teams had already made sure we knew exactly what to expect, but it was impossible to avoid getting excited as the master of ceremony, Chemini, introduced our keynote speaker for the day. 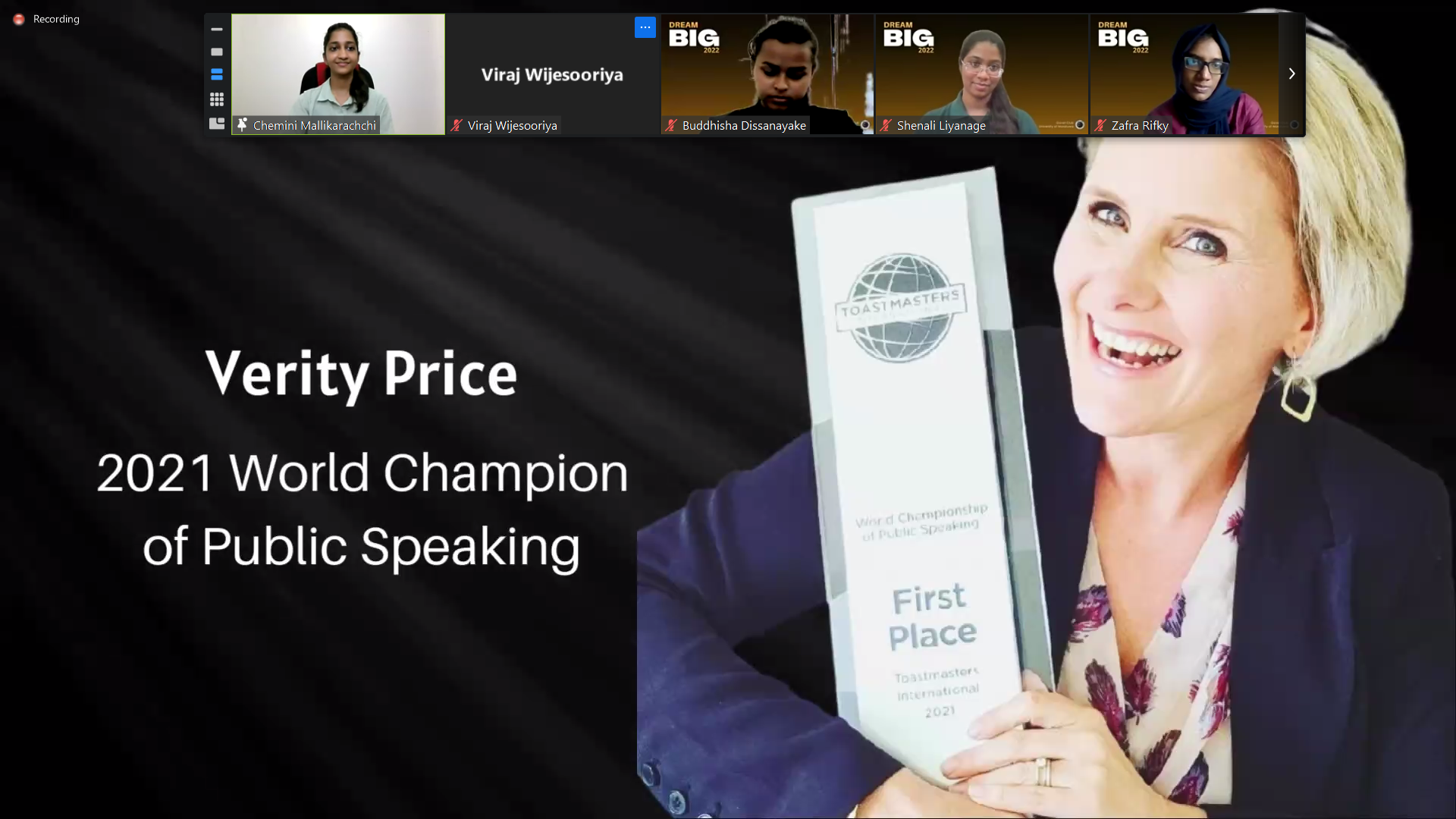 The session would be conducted by none other than Verity Price, the 2021 World Champion of Public Speaking. The only thing more impressive than her stage presence and personality was her long list of achievements. The introduction video created for her was so stunning that it even seemed to have taken Verity by surprise. 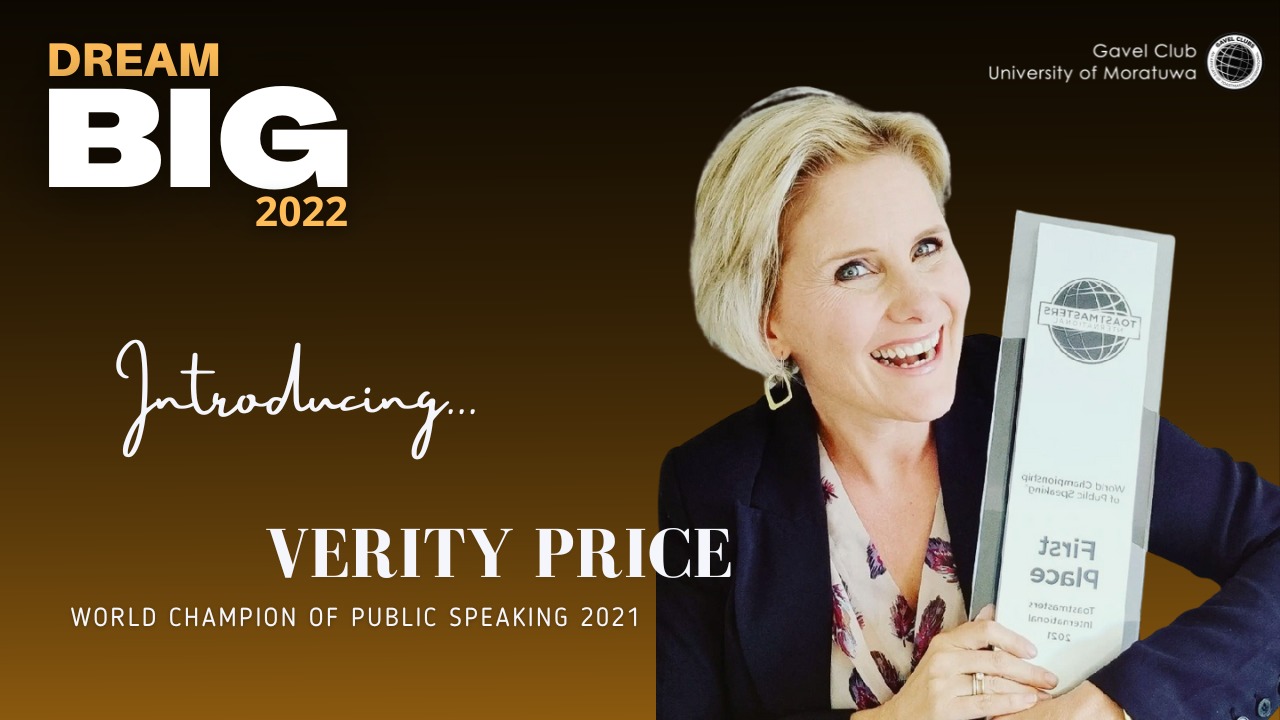 Verity was not just a public speaker but an accomplished singer and actress as well. She was the first African and the sixth woman to be crowned as the world champion of public speaking. Doing all of this while being an avid hiker and fulfilling her countless  responsibilities as a mother makes Verity’s accomplishments all the more impressive.

The goal of Verity’s session was to teach us the art of crafting a winning speech. However, before revealing the secrets of her trade, Verity directed this question to the audience: What makes a winning speech?

A wide variety of answers flooded the chat. Some participants thought that knowledge and facts can make you a winner. Others placed more weight on humour and facial expressions. Vocabulary, delivery and confidence featured prominently as well.

But according to Verity, a winning speech requires only 2 factors

These two factors are not as simple as they seem. And what better way to explain complex concepts than through a story?

Verity engaged the audience using the story of how she developed the right mindset for a world champion. Her first time participating in the world championship of public speaking was in 2012. She did not take the competition too seriously. She was confident in her abilities that she did not believe in preparing beforehand.

On the other hand, Verity’s sister was a nervous wreck leading up to the preliminary stages of the competition. She spent months preparing her speeches and even had to hire an anxiety coach at one point.

Verity wrote a story the day before the competition and entered with a carefree attitude. But despite her best efforts, even in subsequent years, she could never do better than placing 3rd in her division.

But Verity’s sister made it to the global semi-finals in 2012. Her nervousness was replaced by confidence and charisma the moment she got on stage. This incident taught Verity that being a champion required the mindset to go through gruelling training for months on end.

In 2021, Verity Price trained 4 hours a day, every day, for 3 months. The main lesson she learned during this period was that a great speaker “makes friends with feedback”.

Gathering opinions from others is vital when you are crafting a speech. Coaches can spot subtle mistakes that are invisible to you. Feedback from audiences can show you how to make your speech more appealing to the general public. If you cannot tolerate criticism, you can kiss goodbye to your dreams of being a great speaker.

Next, Verity moved on to the process of picking the right speech. She began by narrating a story about white elephants.

A white elephant is not a mythical creature. It is a term used to describe an object in your house that you have no purpose for, but cannot dispose of either. Some examples are a giant coffee mug, or a hamster cage in a household that has no pets.

In South Africa, there exists a tradition of giving away white elephants as Christmas presents. The idea behind it is that something that is useless to you may serve a useful purpose for someone else.

The stories you use in your speeches can also be white elephants. Often, a winning speech does not contain bizarre or outlandish stories. Great stories often seem ordinary to the narrator, but can contain a valuable lesson for the audience. In Verity’s words; “speeches should be sincere, not sensational”.

Just like a white elephant at a Christmas party, a story is a gift that you give to the audience. And thus, it must be wrapped appropriately. The wrapping for the gift, that is your speech, is the title. Just like an ornate and beautiful box intrigues the receiver of a gift, an interesting title makes your audience curious. And a curious audience is far more likely to listen to you.

A speaker’s goal is to ensure that their audience is committed to their story. Curiosity is one way of getting them to commit. Another way to increase commitment is by forming a connection with your audience.

Verity’s advice for building a connection was simple. Try and find a universal message in your speech. She mentioned falling in love, or being betrayed by a friend as examples of universal messages.

The title and content of your speech are not the only things inspired by white elephants. The entire speechwriting process can be reduced to 4 steps represented by the letters G, I, F, and T. They are,

Getting clear on your message means defining the premise of your speech well. Verity’s advice is to summarise your message in 10 words or less. This short message needs to be simple and understandable for any audience.

Most often, crafting your story is a bit more complex. For this step, Verity introduced 5 sub-steps using the letters S, T, O, R and Y. They represent

After getting clear with your message and crafting your story, it is time to fill in the gaps for your audience. That means creating a rough draft of your speech and delivering it to as many audiences as you can to get their feedback.

Verity talked about how she filled in the gaps in her world championship winning speech. At one point she was miming reading a book with her palms spread open. One audience told her that they would like to see the actual book and hear direct quotes from it. Based on this advice, Verity used an actual book as a prop, making her story even more powerful and emotional.

The final step in your speech is to tie it all together, meaning that you need to come up with a strong conclusion. In Verity’s case, her last sentence was the same as her title. However, there are many other ways to conclude your speech. The only condition is that it needs to be memorable. And with that, Verity Price tied everything together and handed us a bundle  of invaluable advice.

The next part of the programme was a Q&A session where the participants could clarify their concerns about public speaking. Participants as young as 14 years old directed questions on a broad array of topics from incorporating humour into a speech to dealing with a stutter. Verity patiently handled all of these questions, providing clear and insightful answers for the participants.

And thus, Dream Big 2022 came to a close. The third instalment in the Dream Big saga was concluded successfully, leaving all participants in eager anticipation for next year’s edition with another world champion. 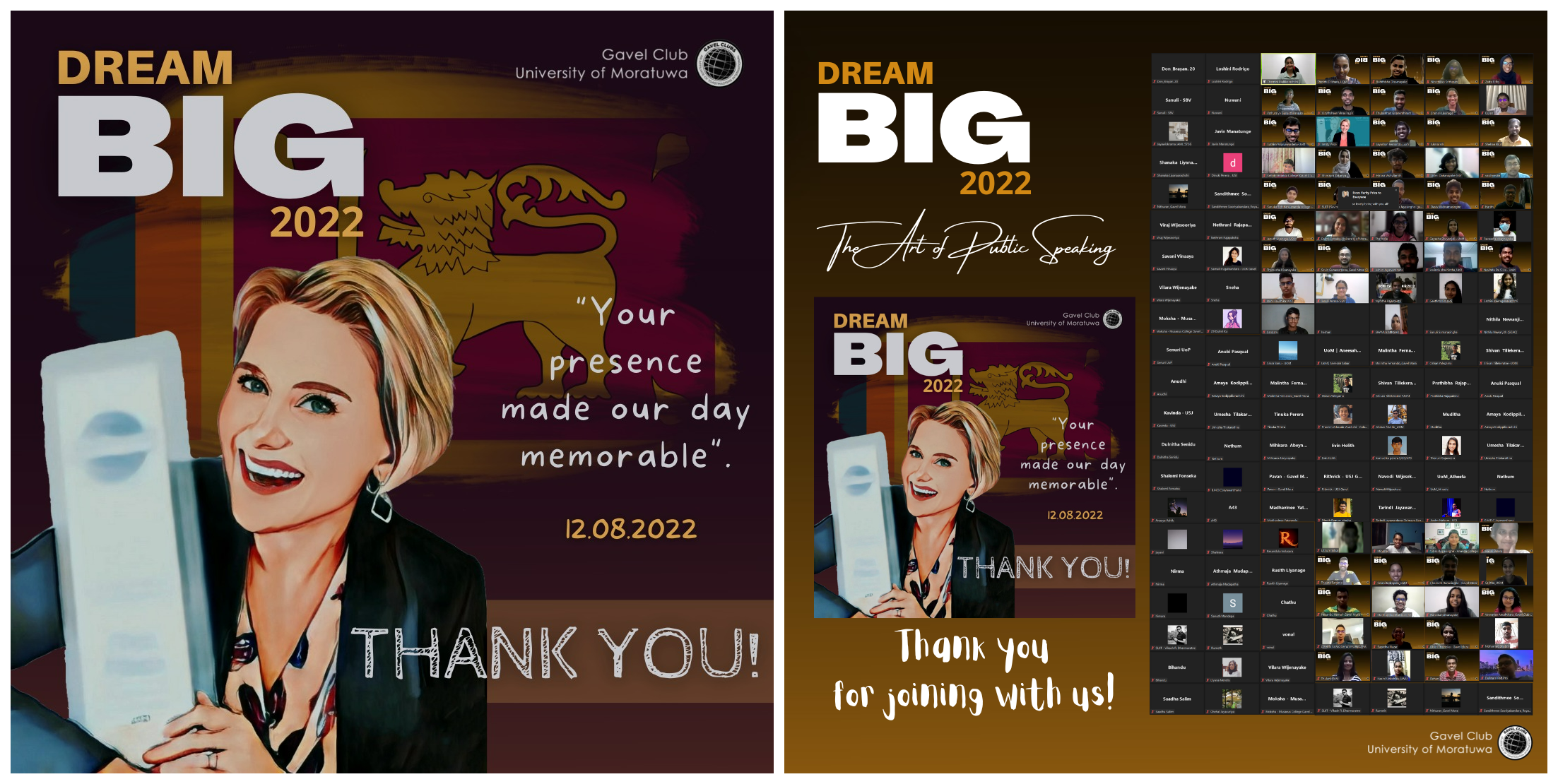