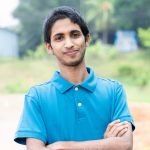 After being imprisoned at home for almost two years due to the pandemic, I was waiting eagerly for a chance to meet my fellow batchmates and seniors from Gavel Mora in person. The day to be remembered was the 30th of April 2022. Thanks to the untiring efforts of the co-chairs and the organising committee, the traditional “Gavel Avurudu 2022” was ultimately brought to life, five long years after the last Avurudu celebration. 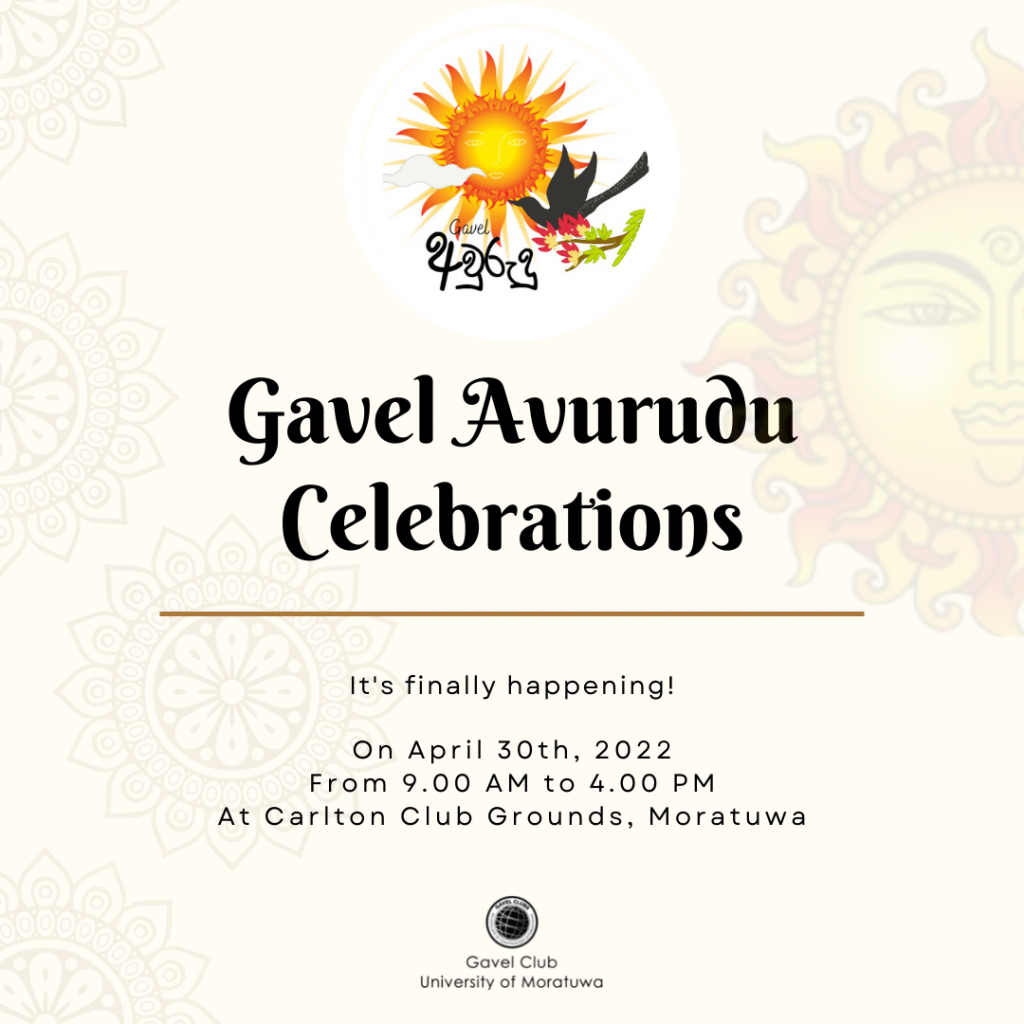 The great day was inaugurated by the lighting of the hearth, locally known as “Kiri ithiraweema” at 9 a.m. It was led by our beloved President Suthira along with the members of the executive committee.

Soon afterwards, the Round-Robin session was held with a splendid Avurudu twist. As everyone sensed that there was a potential risk of being soaked by the grey clouds, it was held indoors. Each member was given a token with a word related to Avurudu. The speaker had to give some hints about it and the audience was supposed to guess what it was. Everyone got a chance to speak. Some gaveliers made it quite hard for us to figure out the word. But the session came to a rather quick end, thanks to the spot-on guesses made by Gavelier Jayoda. 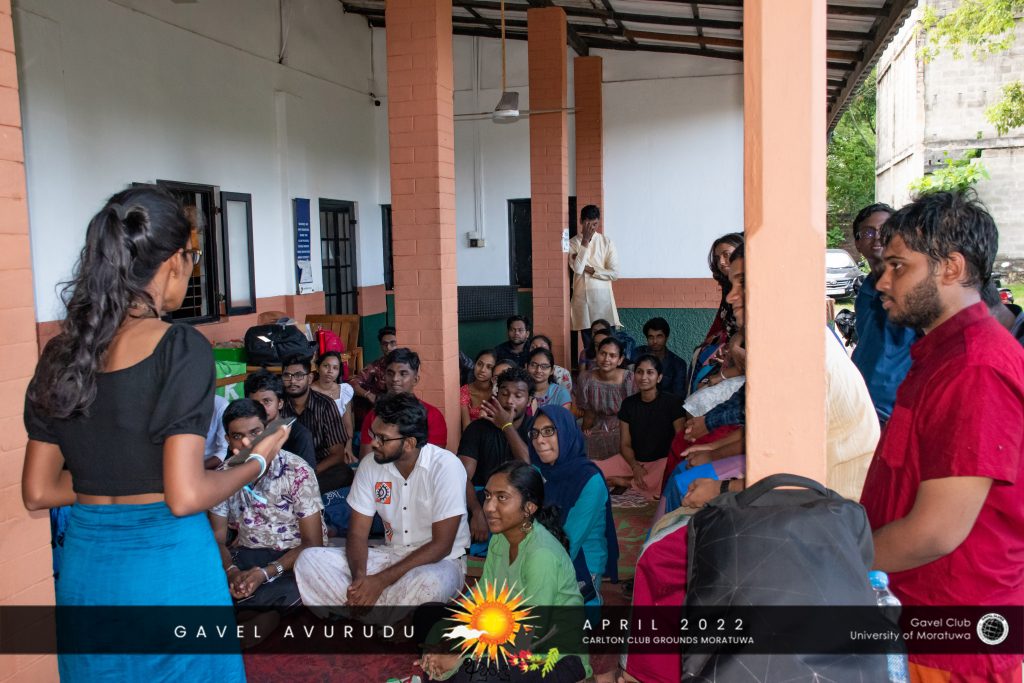 “Balloon blasting” was the first game held. Most of the contestants seemed to have had good practice at the game and within no time, half a dozen had blasted their balloons and crossed the finish line. Or rather I would say some, because the rest had a hard time trying to enlarge the balloon to be bigger than a tennis ball, including myself. 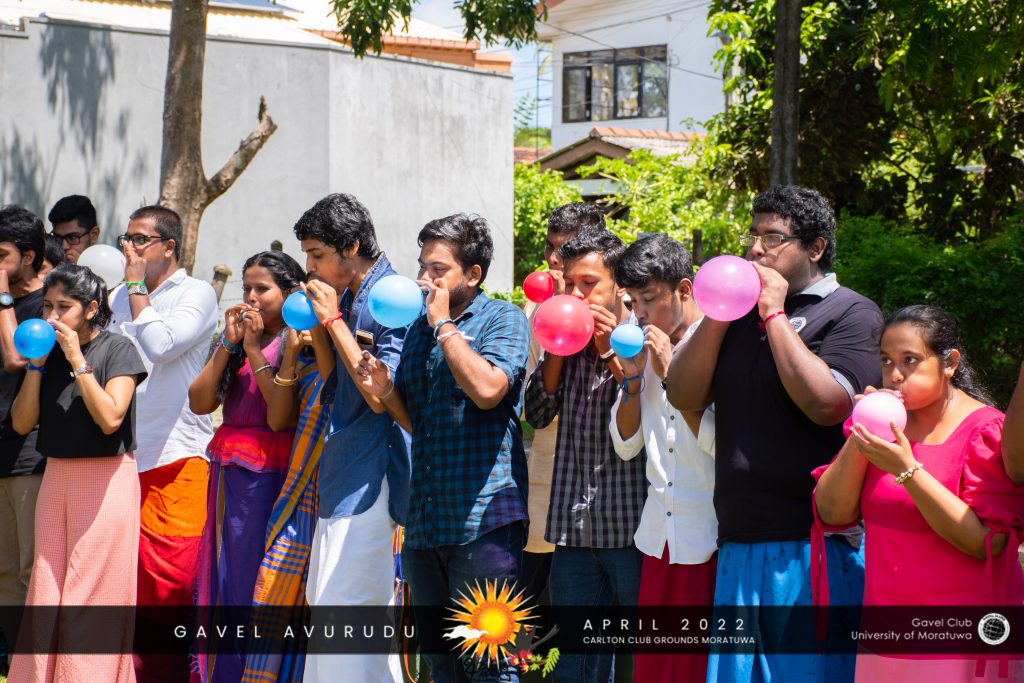 “Filling the water bottle” was the next game. It was the first team event we had. Two teams filled the bottle to the brim at almost the same time, so a final round was held to determine the true winner. Team Green finally won amidst a lot of cheers and jeers from the other teams. 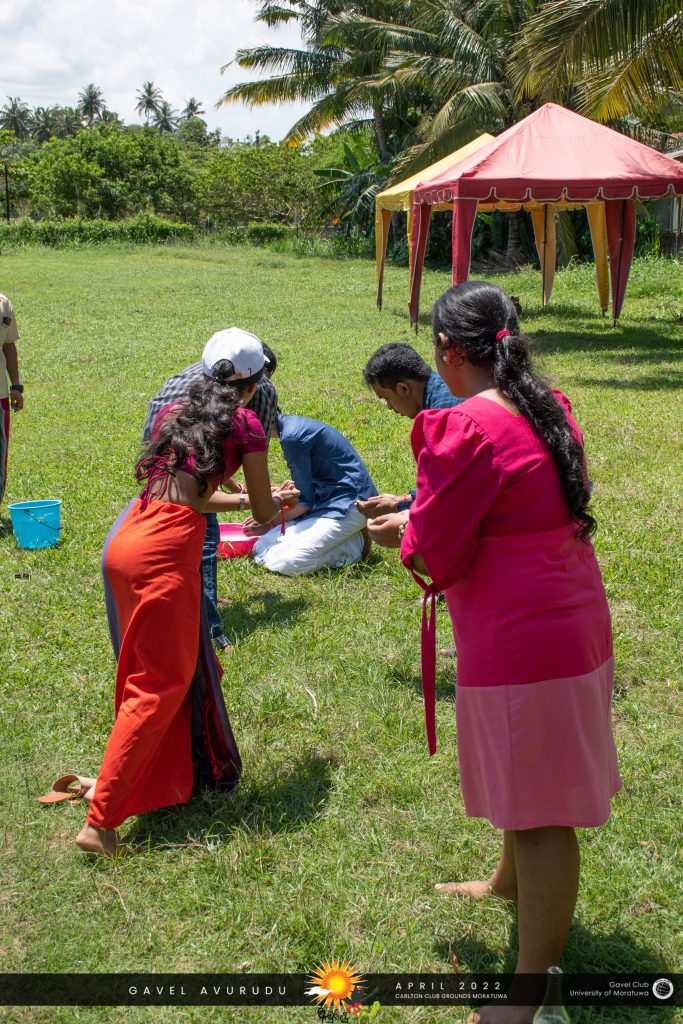 Since the organising committee had created an attractive backdrop, everyone wanted to take their best pictures in front of it. After being baked in the sun for a considerable time,, the initial iconic group photograph was taken. 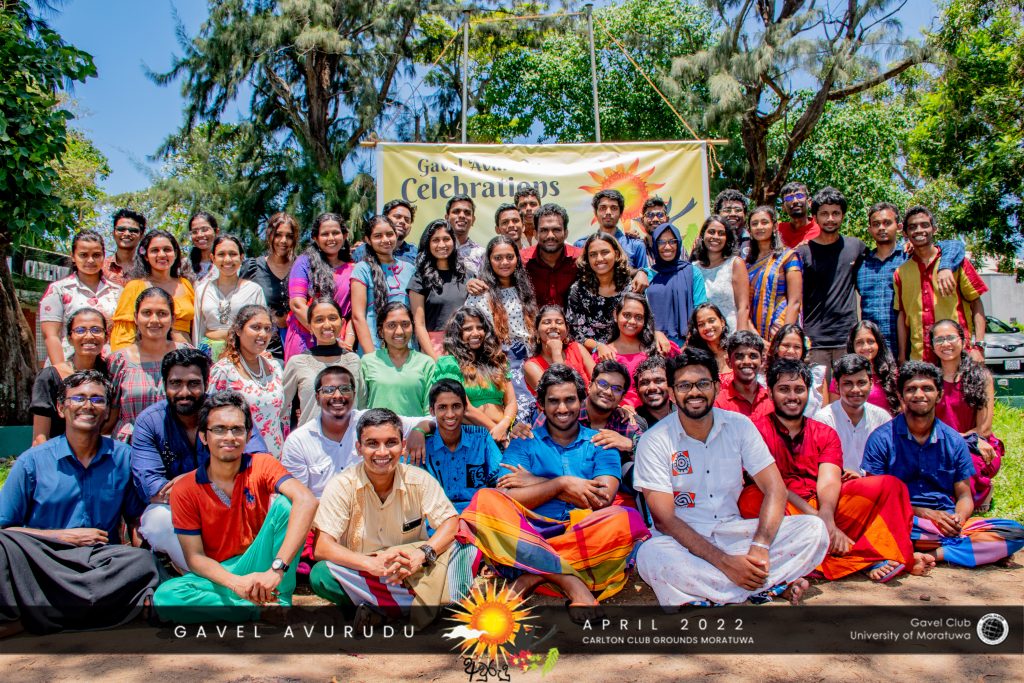 Next on we had the three-legged race or “Thun paa diweema” where you had to choose a partner and run with him/her. The catch was that one of your legs and one of your partner’s were tied together, hence the name implies. While two ladies, namely Gavelier Niruthikka and Gavelier Zafra, crossed the finish line first with ease, a pair of gentlemen suffered a dramatic tumble as well. 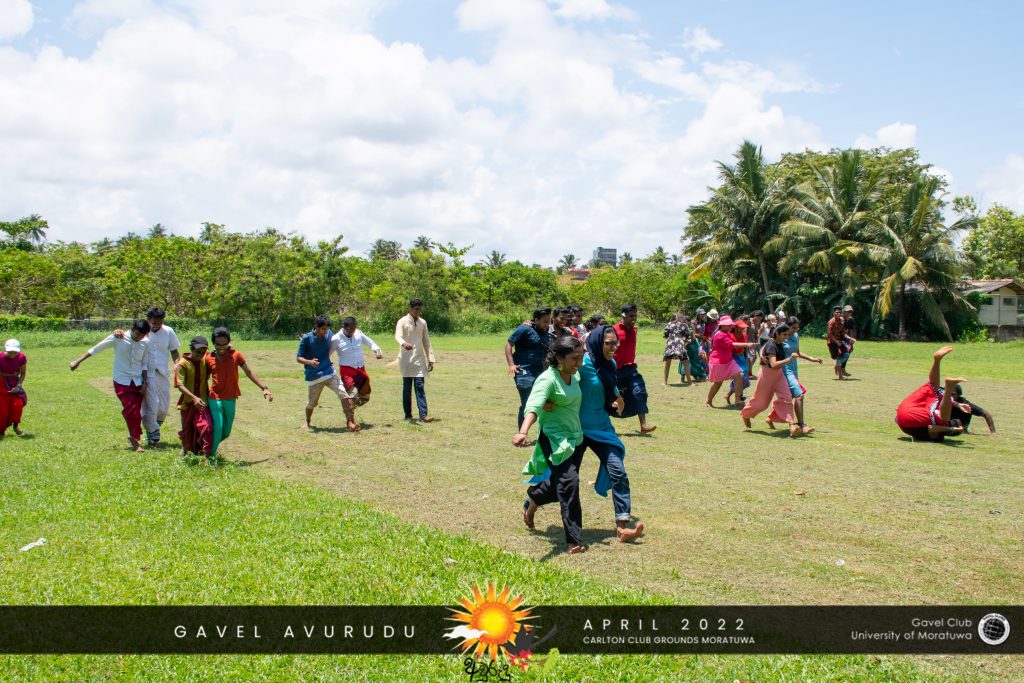 Ever tried eating food hanging from a string? If not, you’re not alone because most of the people who took part in “Banis kaama” had to think of innovative ways to eat the bun, especially when it fell onto the ground. The emerging champion of that round was Gavelier Paul who clearly seemed to have exceptional skill at the game.

Then came the most dazzling event, traditionally known as “Pani bambare”, where each team member had to run to a pole, circle it while holding the pole for five times and run back to tap the next player.  Some players became so dizzy that they found it hard to walk back yet alone run. Once again there was a problem with the finishing time, so a final round was held to select the winning team. Thankfully, the game ended in peace without any casualties. 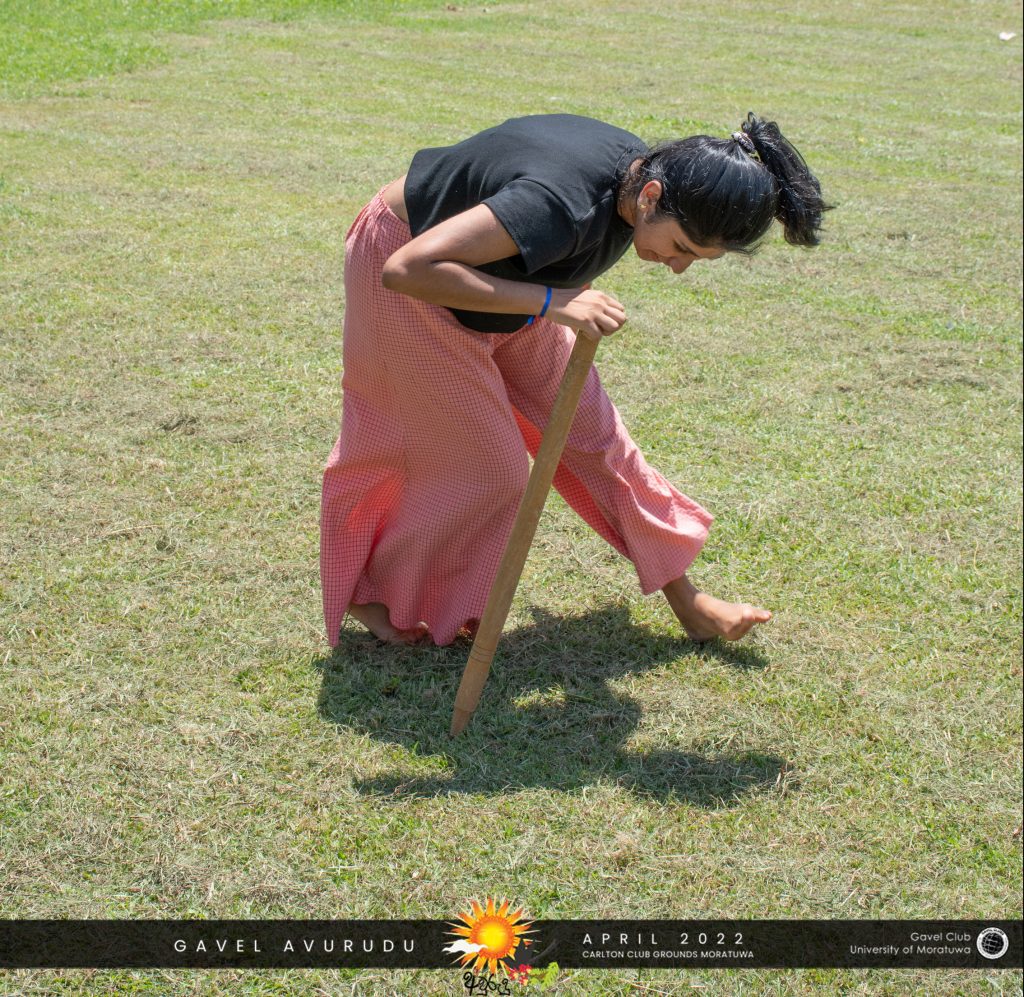 Everyone was exhausted by then, so it was the best time for lunch. Thanks to the organising committee, we had a great appetising meal and some mouth-watering biscuit pudding for dessert. After the re-energizing lunch, we engaged in some lively discussions with the people around us thus, strengthening the bond between the gaveliers. Old Gaveliers went around making acquaintances with the newest members of Gavel Mora.

Well, a gavel meeting wouldn’t be complete if you only had a Round-Robin session, so a Table Topics session was introduced which eventually turned out to be a short drama presentation by each team. Each team had to randomly pick a topic which contained a fictional Avurudu tradition. They had to come up with a reason as to why such a tradition was practised and show how it was done in a creative way. The topics were;

The teams’ performances were beyond the expectations of the Table Topics Master. The acts and narrations were in perfect sync and order too. 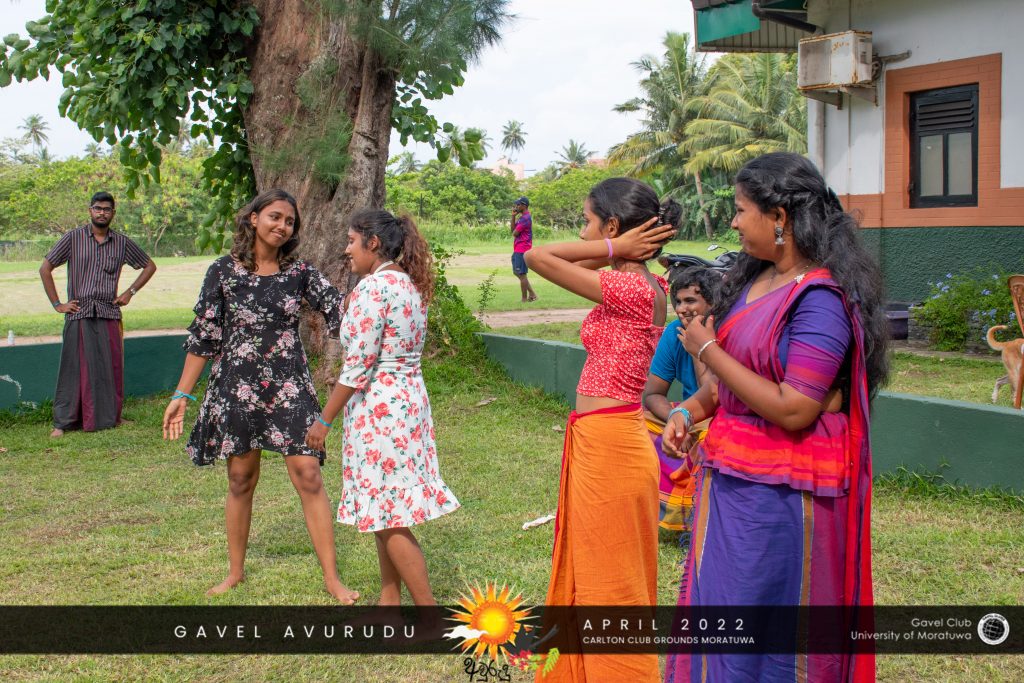 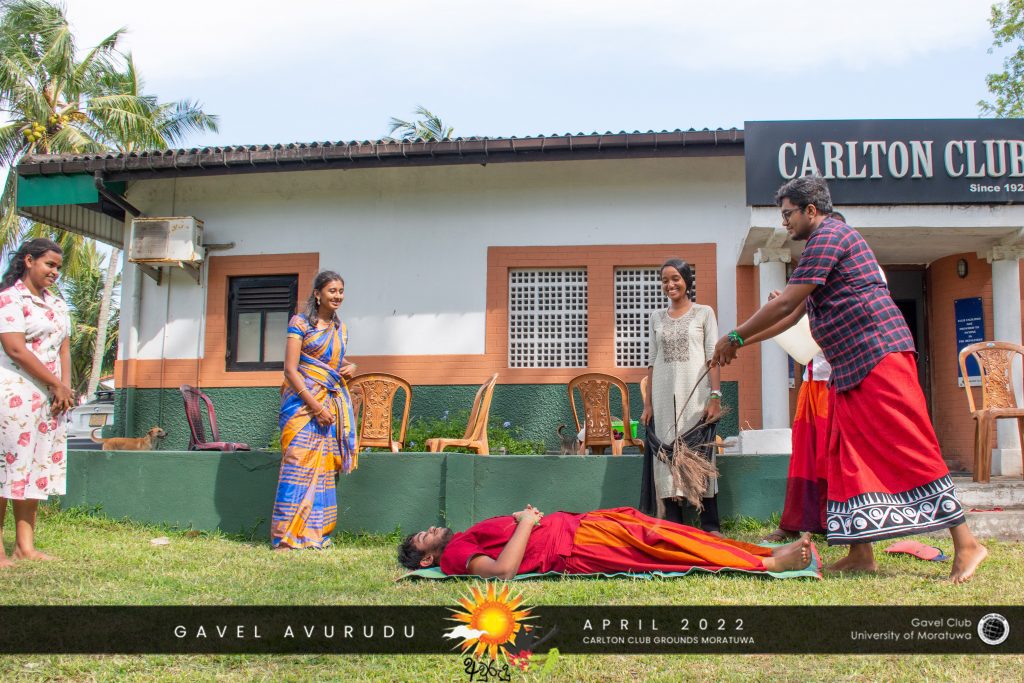 The grand finale of the day was the special Avurudu relay. Starting off with a word puzzle, the teams had to solve it first, then carry a lime on a spoon until a team member meets another member, who then had to run to the end and eat yoghurt being fed by his blindfolded teammate. The word puzzle seemed challenging for some, and most of the yoghurt enthusiasts had their faces smeared all over with yoghurt at the end! With a lot of fun and laughter, the final game for the day ended and more iconic group photographs were taken at the end.

“Raban handa” (Avurudu version of drum roll) please, it’s time to announce the winners.  Winners from each game were called upon and given gifts wrapped in brown paper.

Team Green was lucky enough to win two games in a row. Once the awarding ceremony was over, the gifts were unwrapped, and they turned out to be chocolates and biscuits for everyone. The gift boxes were emptied in no time. As all good things come to an end, we had to bid each other farewell. There were no two ways about it, the event was epic.

Of course, such an epic Avurudu event would never have been held if not for the untiring efforts of the project co-chairs, Gaveliers Thulasithan, Umesha, Malintha and the members of the organising committee, Gaveliers Anuki, Viruthshaan, Selani, Oshan and Kethmi. The talented flyer designers, namely Gaveliers Shenali and Dasis should be well praised too. All photograph credits go to Gaveliers Namina and Thushara who did a tremendous job in taking a load of high calibre shots which would serve as everlasting memories for everyone. Kudos to all those people once again!

Last but not least, I would like to thank everyone else who helped in whatever way possible and all participants for making this event an unforgettable one. 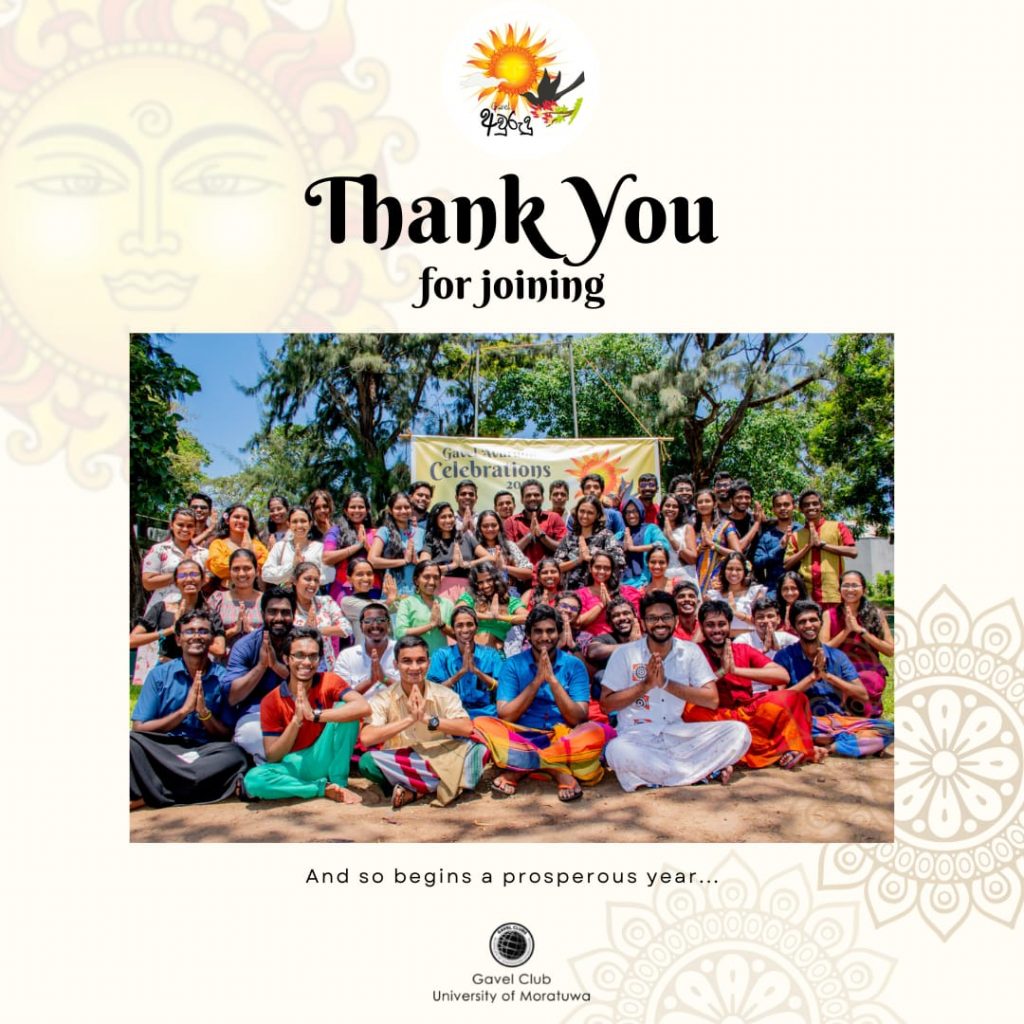