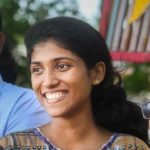 Time was 1.20 p.m. Despite all the teasing on “Lighting the hearth”, especially from the former Executive Board, Harshani and Lihini decided to put their hands on this mammoth task.

“Hmm…this seems to take a while…maybe more than that…”

Till Lihini and Harshani get it done, let us playback the preparations during the week before.  What is the worst/best thing that could happen when one of the project chairs is a marketing guru and his girlfriend is a design guru? Yes! They could spam your Facebook wall making you feel like you just visited a site promoting Avurudu at Gavel. That was the same experience of every Gavelier at Mora for the past few days. But without a doubt, it was indeed lovely. All thanks to Hashan Rahubaddha, Project Co-Chair at Gavel Avurudu 2017 and the man behind getting everyone together.

No man could be successful without a woman with him. And it stood the same for Rahubaddha.  She was the one who kept in-boxing and alarming Gaveliers on event preparations. It was none other than the very caring Ama Kalpani, Project Co-Chair at Gavel Avurudu 2017.

“Oh! It is 1.35 p.m. Seems like Harshani and Lihini are somehow getting the milk in the pot to overflow” *clapping suspiciously*

After everyone filled their tummies with Avurudu delicacies, it was then time for “Popping the balloons”. Whoever picked the balloons had planned it well, giving Gaveliers a hard time. However, Dulip became victorious while Merl, the defending champion, became the last with pride.

At Gavel, jump or crawl, winner is a winner. Being faithful to those words, Sachithra won the men’s “Sack race”.  In women’s event, Sachini was able to prove that she is Michael Phelps at sack racing.

Ever heard of “Pillow fight”? I hope not about Gavel’s take on it. At Gavel, we believe if you want to stay on the beam, you need be the one who gets beaten. And Dulip was the master of it, securing the first place in that event as well.

Gavel is family. In family, if you win, you want others to win as well and that’s not called cheating. For that reason, we had to crown Lihini, Dulip and Sachni; all three of them as winners of “Marking elephant’s eye”. Not to forget that there were exceptions like Kanchana and Chinthana who were much ‘stubborn’ and ended up meters beyond the board.

While things were so, some were very ambitious on Avurudu. Just like Shehan who decided to break 3 pots at once, being the first striker with a “Blind pots” hat-trick in Gavel history. Goals were set high by Praveen to win “Bun eating”. But it turned out that he enjoyed eating the bun than winning the game. The opportunity grabbed by Sachithra who was able to be the first to finish his bun. The winner was gifted with another bun to enjoy at leisure.

Then it was  the favorite event for many of us, “Spin and run”. We swear, no one was drunk but that’s how you run when you spin 10 times! Sorry for the ones who were flat on the ground waiting for help. Just like the name “Somi Boys”, Kethaka, Chamode, Yasumi and Kavindu secured the first place. We really wanted them to reconsider their team name.

You could be blindfolded, but no one can stop you feeding a yogurt to your loved one at Gavel. That was the motto for Sachini and Kethaka, the victorious duo at “Blind feeding the yogurt”. Chathuranga, the one who listens to girls the best, was the “Hidden guest” for the evening and Rosa made the first right guess. Alumni mixed team led by Lihini were able to regain the long preserved championship title in “Filling water to the bottle”.  While Kasun and Hasara were successful on “Balancing the lime on the spoon”, and Kasun Udara on “Hat passing”, Theshani made the closest guess of 225 seeds inside the papaya.

After everything, Gaveliers decided to give some rest to their feet and sit on the ground. Everyone’s attention was on who could lie and perform the best. Answer is no one in front of Shenali’s hot dance and Chathuranga’s humorous performance. The duo ended up being the “Avurudu Kumari” and “Avurudu Kumara” respectively for the year 2017. But not to forget, Kanchana nearly breaking his back while throwing Navodini up and Sandaru accepting that she bathes every day. (Please recall yourself on the theme of the game. Thank you.)

This marked the end of the first half of the Gavel Avurudu, giving space for the 324th Gavel Meeting. Co-Chair Rahubaddha was the Toastmaster for the evening. Appreciating Ama’s support, the Round Robin topic selected was “The most unforgettable Avurudu moment”.

Unsurprisingly, for many, the unforgettable incidents were Gavel moments. While many boasted on climbing up the tree house for the first time, Kanchana shared his learning on sewing an unbreakable pillow; competition for our designer, Ushani for sure. Discovering Harsha as a designer and his backdrops then onwards was a grateful moment for all. And for most, this year Avurudu was the best and reasons varied from Shenali’s floating ghost to late night chats at preparations and Shehan’s hat-trick and many more.

After a flashback of memories, Ama addressed the audience as the Table Topics Master. Just as her personality, her topics were lovely!

Harsha scoring back, he thanked Ushani for being a mom to him. Kasun Withana revealed how he cheated Avurudu games as a child while Mihil thanked Gavel for getting him out of his house. Kanchana demanded Navodini to give his ‘Kokis’ back which was too late. Merl and Ushani both were grateful to the Gavel family for being there always but Ushani really wanted everyone to know that she scored great for her final project (Proud of you!).

“It’s not always about competing or winning but about cooperating.” Words to live by came out of Bahavan’s mouth and all nodded their heads in agreement. Hats off to Project Co-Chairs and heartfelt thanks to all Gaveliers across the country who joined us!

With that amazing evening on top of grass, under the stars, the 324th Gavel Meeting came to an end. Lighting up the night with fireworks, Gaveliers headed over to their after-party. Well, everything happened after that stays in Gavel- at least until the next blog.