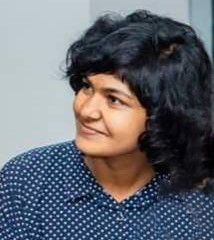 All of us were on cloud nine when we finished the 433rd meeting on the Gavel Mora Calendar, particularly because it was one of those occasional times we were happy in a virtual meeting.

Where? Well, whichever place our Gaveliers found their internet connection to be the strongest at their homes.

Why? Because although the Sun was felicitous to stroll around houses from Pisces to Aries, for us the never-ending hellscape that was 2020 was still bleeding over into the Sinhala and Tamil New Year. (PS: If you’re reading this in future and have no idea about this – wait for two weeks and you’ll get it)

The time was 5.00 PM and as per usual our Gaveliers opened their Zoom application for the much awaited “dhedeemeh nakatha”. Adhering to the long-established customary rituals, the president Dinidu Edirisinghe officially commenced the meeting by expressing what awurudu means to him. So, while Kavishka Cooray, Toastmaster of the 433rd meeting introduces all the role players, let’s pay a visit to the preparations week before. What happens when a couple of design/marketing gurus come back together to organize a new year themed meeting, you may ask? Well, first, you will get spammed by Facebook posts and WhatsApp messages. Then you will get “reminders” and for some of y’all that haven’t been pumped up enough yet, you will get personal messages with threats to participate in contests.

About those contests, the first avurudu keliya was the short speech competition “awuruddeh kathandare” where our own Gaveliers opened about what new year means to themselves. Niruththika, Savin and Malintha shared their thoughts on awurudu and won the first contest with their astounding speeches that made us all miss those times where we got to experience all those new year conviviality.

This was followed by the second awurudu keliya, with “punya kalaya” vibes where we reminisce about our spiritual connections but here on Gavel, we doubted about our friends that which we thought we already knew. In other words, on 12th of April we all realized that all Gaveliers had a “Gavel-liar” within. There, we had to comment under the Gavel-liar post with an innocent yet mendacious lie. Maybe since we’re all in quarantine, the comment section was flooded by a dime a dozen of “inside” jokes. Venuri Kavindya got the Gavel-Liar title with an ending line in her lie that came true after the awurudu meeting, “if you don’t know who I am, you are not a true gavellier”.

Sinhala and Tamil New year, as the name stands, the new year is celebrated by Sinhalese and Tamils in Sri Lanka. Two cultures, Two religions and Two languages. Thus the organizing committee took that notion to celebrate the bilingualism in our own gaveliers. “Pada Maru” as they called it, gave three famous and funny raban verses that the contestants had to translate. Muaadh won the “Gavel translator” with an extravagantly precise translation that went like “Five Haban Chickens, They’ve got rice to eat, “wow” when they eat, with buttons on their necks”.

Unlike other virtual meetings where the Zoom’s screen sharing option comes to life when it’a time for the table topics session. We were skeptical when the message popped up “Kavishka Cooray started screen sharing” on the Round robin session. A picture of a couple of strange faces guarding a divine kavum bowl was shared and it was about time for the fourth and the final Awurudu keliya. We all were tasked with helping Donthababakka, to get to the love of his life, a kavum bowl. Besides, all of our detectives made intriguing theories with the sole mission of breaking those interpersonal bonds in which Inodhee De Silva was proposed as the winner. This may sound unempathetic and inhumane but remember all is fair in love and kavum. 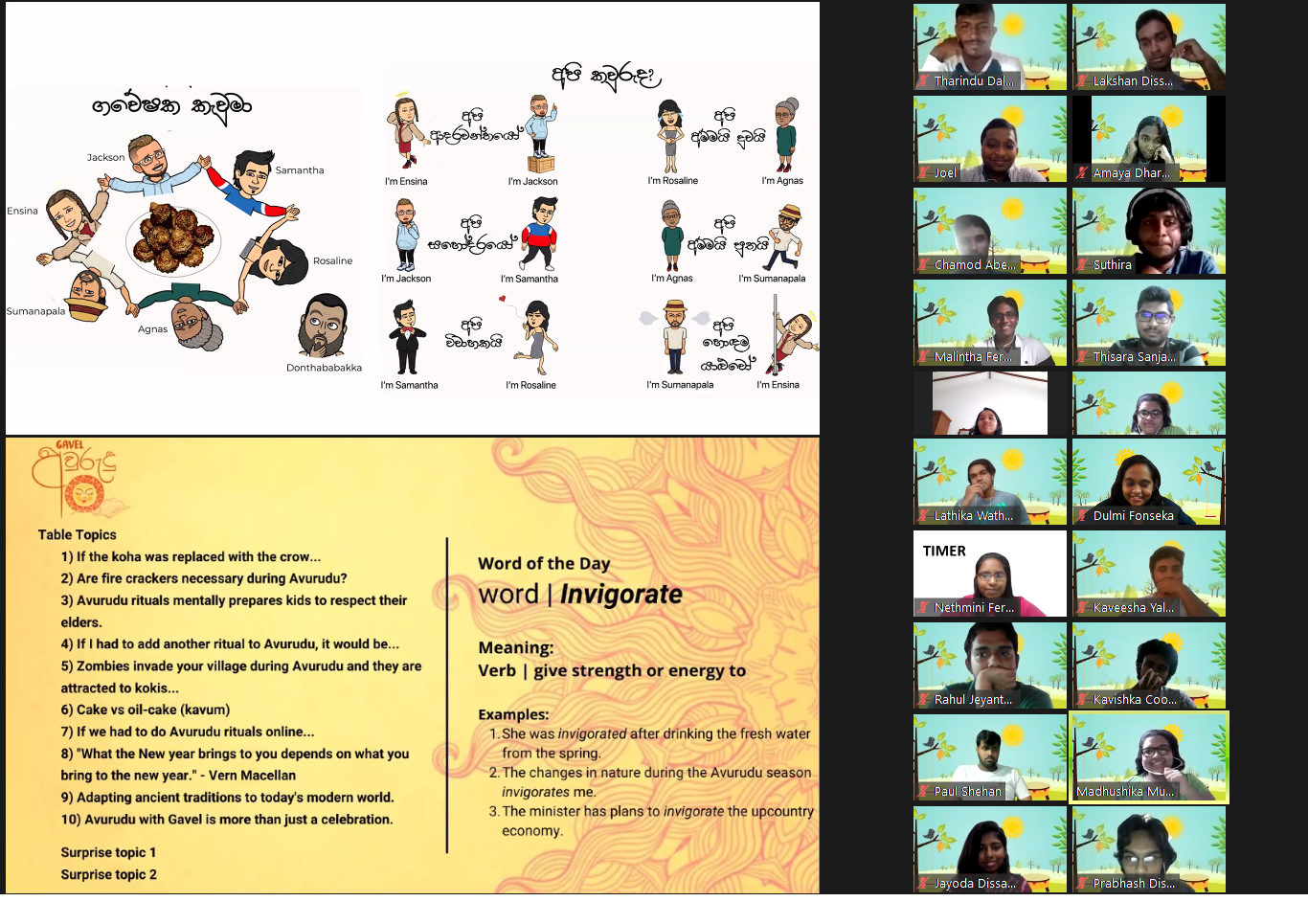 Table topics session which was also a part of the new year saga, as the best speakers’ double would be crowned as awurudu kumariya and awurudu kumara, was conducted by none other than our own Gavelier, Suthira Wijewardhane. He had some interesting topics such as

Madushika as always, didn’t forget to respect her favorite, milk rice and lunu miris and Rahul’s bold statement that “cake is better than oil cakes” kind of started a heated argument in the trusty zoom chat.  In fact, there was “Pro Kavum”, “Pro Kokis” “Pro Asmee” propaganda expressing their disagreements. Among those Pro Kokis followers were Lathika and according to his table topic speech apparently Kokis can even start a zombie apocalypse. Thereafter Paul voiced that the sun and whole auspicious times shouldn’t be disregarded as a mere myth in the name of advanced technology. In their table topic speeches, Malintha gave an informative speech on firecrackers and their adversities as an avoidable expense whereas Anuki chose a surprise topic and inspired us by speaking about herself and new beginnings. With that, Amaya Dhammasiri and Akhila Senevirathne, our immediate past president and club secretary, selected Malintha and Anuki as Awurudu Kumara and Amurudu Kumariya. The reigning Awurudu Kumara and Awurudu Kumariya Paul Shehan and Dulmi Fonseka crowned their successors by handing over a virtual crown yet with realistic hand movements to represent the enthroning. 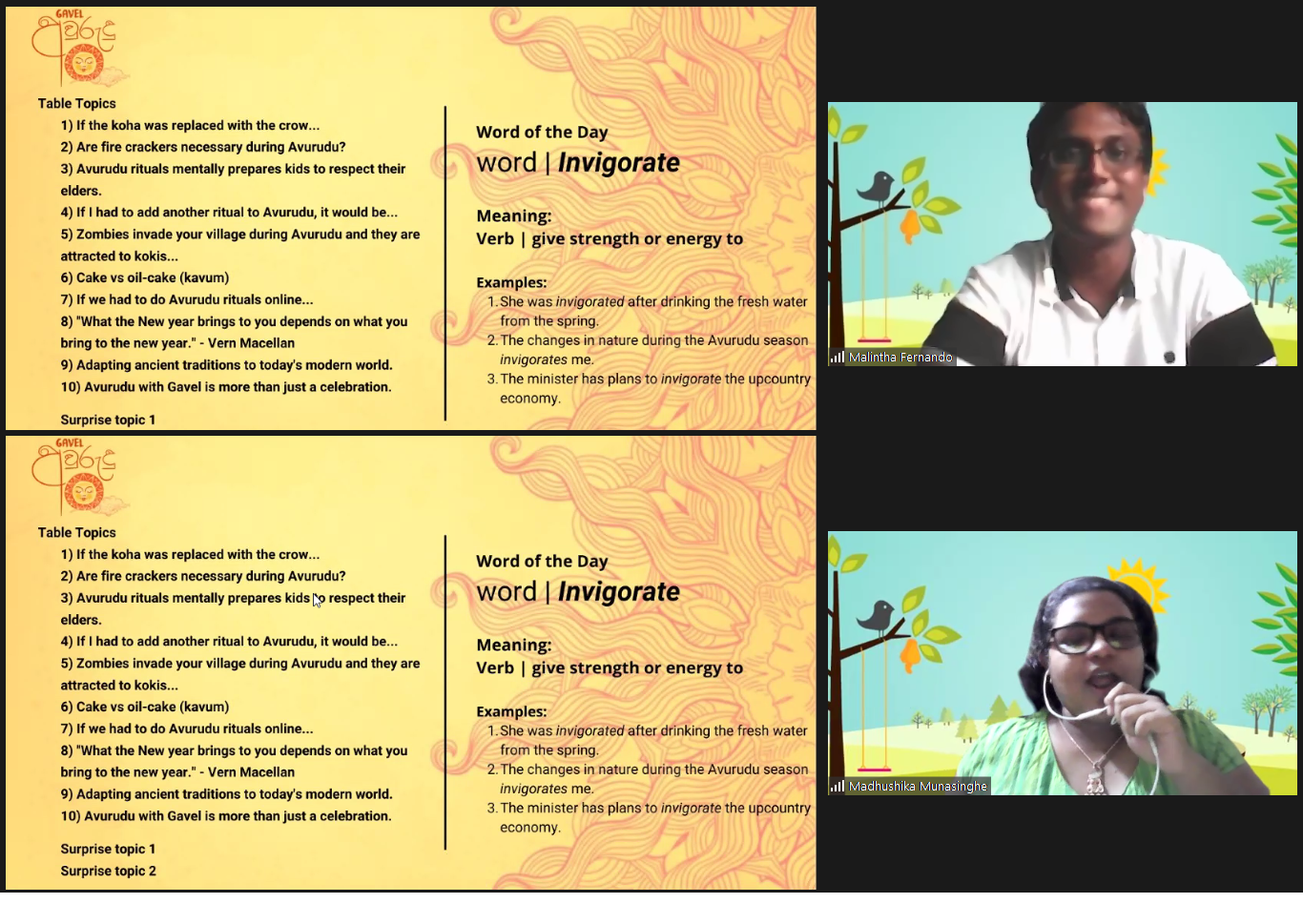 After that, the general evaluation was done by Mudith Witharama. Last but not least the new normal, 15-second smiley face for the camera marked the end of the meeting. Special appreciation goes to Viraj, Nirodha who designed the flyers, Shimzara, Zafra for those catchy captions and to all role players and those to who participated for contributing to such a memorable meeting.

Role Players of the meeting