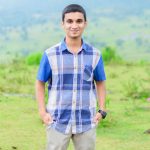 The Gavel Club of University of Moratuwa has been the stepping stone for many generations of aspiring speakers and leaders as a breeding ground for, among many other traits, self-expression and confidence. A place to unmask yourself, a theme teased throughout the path leading to Gavel Orientation 2022. After weeks of anticipation and amidst looming power cuts, a flyer was circulated with the message, ”Gavel Orientation, Happening Today!”, and the curtains finally opened for the next generation of the Gavel family as we embraced them into the family and welcomed them to unmask and unleash their true selves! 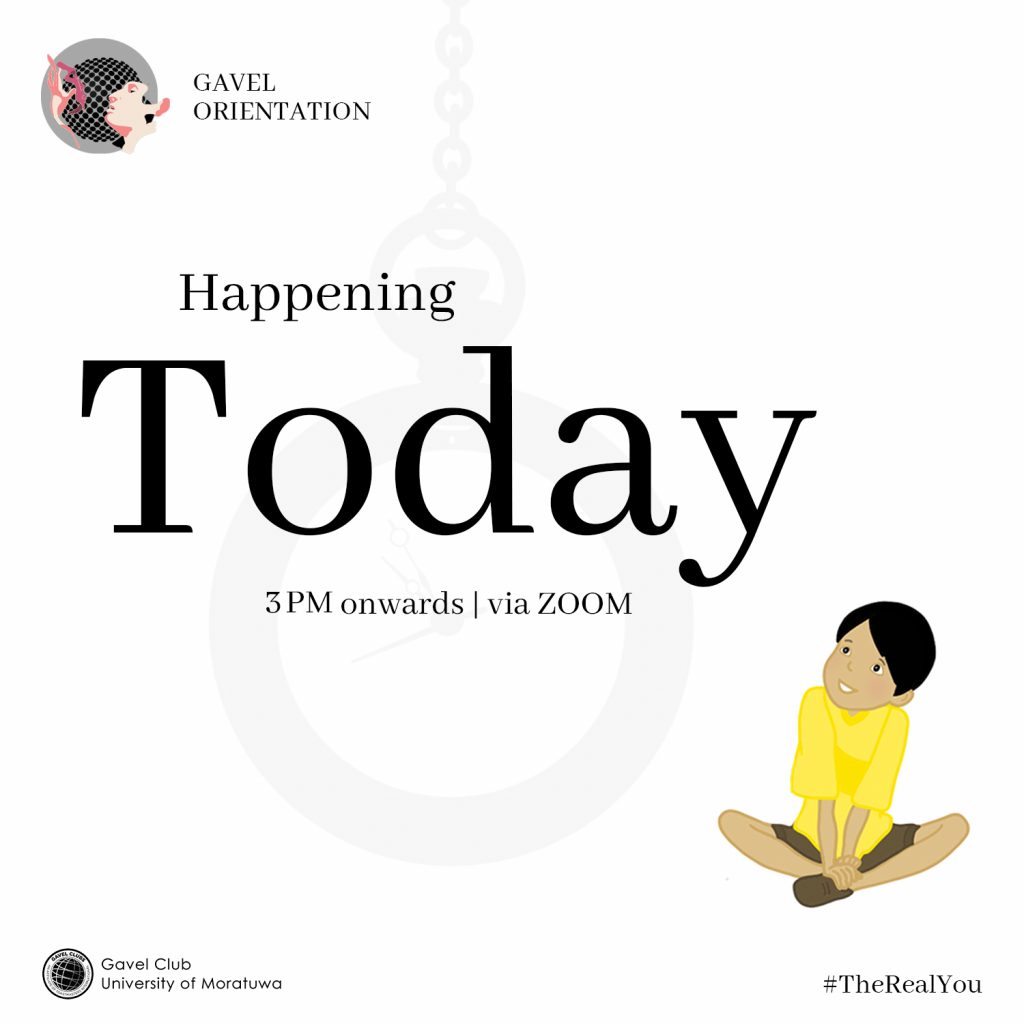 Before the curtains could be opened, the stage had to be set and behind it was a crew that worked zealously to ensure the event was a success. The big day was preceded by late-night Zoom meetings where ideas were thrown back and forth, overthinking every minute detail, even the way in which the mask should fall in the famous teaser. The brainstorming sessions were interspersed by two days for filming; one for the dramatic teaser and the other for the Introduction of Gavel which involved some cool cinematography and strangely familiar locations. Behind the minutes of footage, however, were hours of repeated takes, lighting adjustments, script modifications, editing and much more, all done with great passion.

The event began on the 27th of March, 2022 via Zoom at 3:00 p.m. with the friendly greetings of Selani and Thulasithan as they reminisced their own entrance to Gavel and how they had unmasked themselves, with stories many Gaveliers could relate to. Then, with the announcement of “GAVEL ORIENTATION 2022” and the exhilarating teaser, the screen teleported to a familiar path as it followed the steps of Suthira, the President of Gavel Mora, who greeted the newbies, followed by smooth transitions to other members of the executive committee as they gave a thorough introduction about Gavel, from the fun parts to the educational aspects. 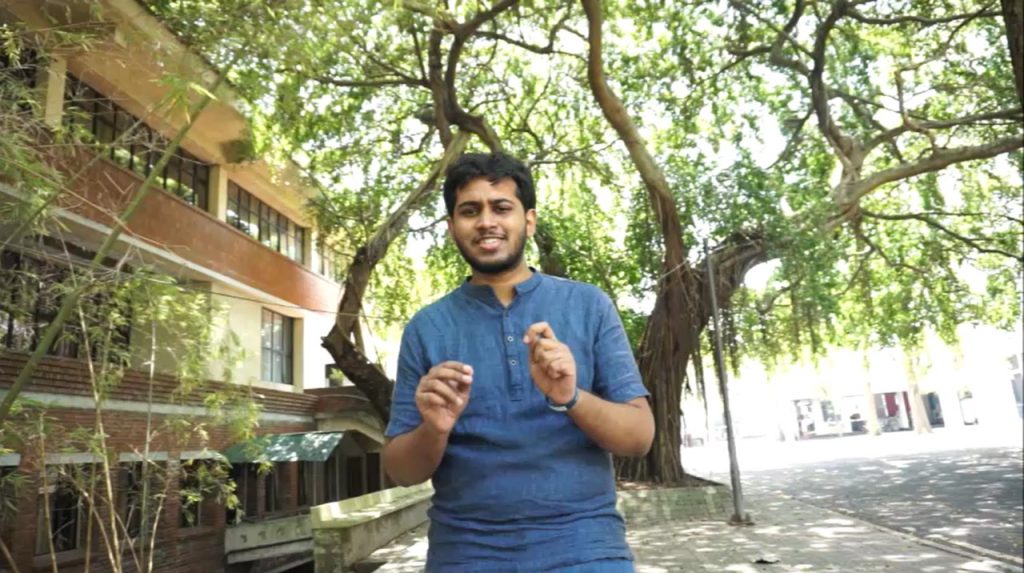 The participants were then divided into breakout rooms, where the newcomers introduced themselves in the exciting ice-breaker session and also pondered the rather nostalgic question, “what message would you send your ten-year-old self?”. The room masters were delighted by the interesting personalities they met, including talented musicians and athletes.

To shine a light on the questions the newbies must undoubtedly have had about what made a speech brilliant and what kind of future Gavel holds for them, two speeches were delivered by our very own Gaveliers with an Alumni session in between. The first was by Namina, an inspiring speech that made him a reserved finalist at Speech Olympiad XIV, about a daunting Chess match and conquering fear that reminded us all that none of us are fortune tellers. 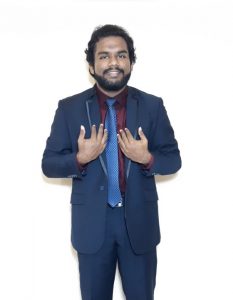 Following Namina’s speech was the much-awaited Alumni session as alumnus Yasir made his arrival to the Zoom screen aptly dressed in his old Gavel Club T-shirt that, to even his surprise, still fits him. His words about how being a confident public speaker can make you shine in a multitude of environments and how the Gavel club is a unique place to develop that confidence gave even the current Gaveliers a renewed appreciation for the club. Referencing his own entrance to public speaking, he spoke of the importance of moving out of one’s comfort zone, because despite how beautiful the comfort zone is, “it is a place that gets you nowhere”. 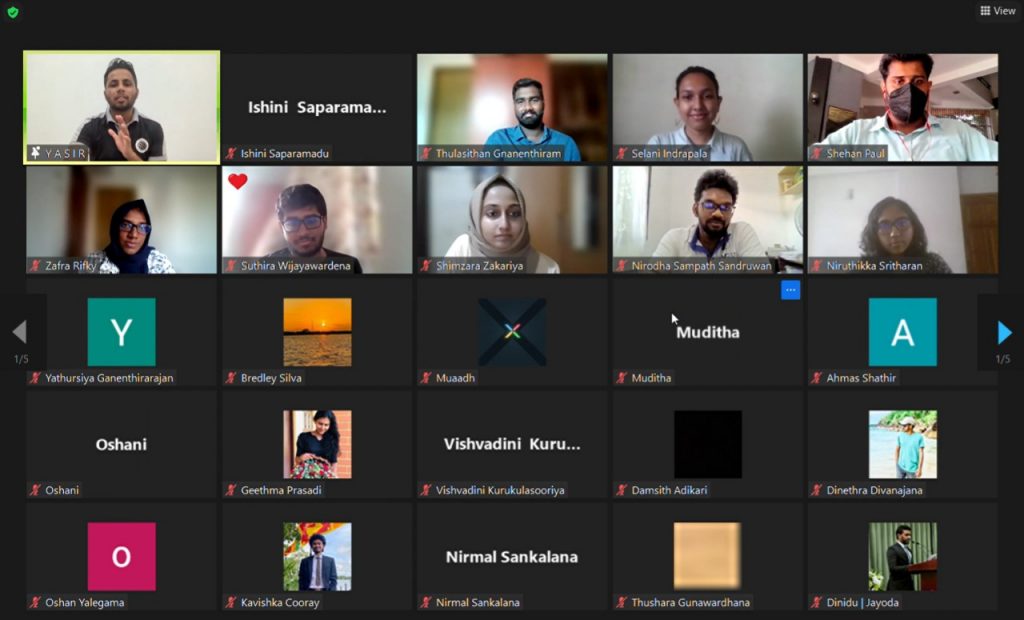 Given only the chance to speak a very few words during the ice breaker session due to the time constraint, the newbies had their chance of speaking their hearts out later in the second breakout room session, the mock meeting. The mock meeting was a replica of the weekly Gavel Educational meeting, but simplified to fit the time constraints. With a bus racing towards a helpless grandma and a superhero desperately needed, the Round Robin session allowed much room for imagination. Then, of course followed the Table Topics session which included topics ranging from deeply philosophical ones like the battle between love and hate, to the more exciting and personal ones like the battle between Marvel and DC which were bound to induce some great speeches.

After the mock meeting, the big day was nearing its conclusion and it ended on the highest note possible with the Winning Speech made by our very own gavelier Paul at the Inter-University speech competition, Speech Weaver. Enthralling from the first second to the last, Gavelier Paul reflected on his life of perseverance and achievement while also teaching us to never listen to the naysayers, who in the pursuit to your passions, say, “know your limits,” and  to maintain your determination and confidently reply, “I’m limitless”. With those words of inspiration resonating through the hearts of the next generation of Gaveliers, Gavel Orientation 2022 reached its conclusion. 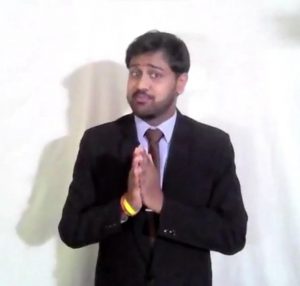 After the event’s brilliant success, the crew behind it all could breathe a sigh of relief and reflect on all that had transpired during the weeks of preparation. From the ambitious design of the flyers and unique approach to the public relations campaign to the constant threat of a power outage hanging overhead, there was no shortage of challenges that the team faced tirelessly. In the end, they were satisfied that their efforts culminated in an experience that ignited a spark in a new group of speakers and leaders that led them towards a place where they can grow to shine even brighter. The Gavel Club of University of Moratuwa, leaps forward to its next chapter, opening the stage for a new array of speeches, meetings, friendships, triumphs and much more. The journey continues, to discover, unmask and unleash the real you. 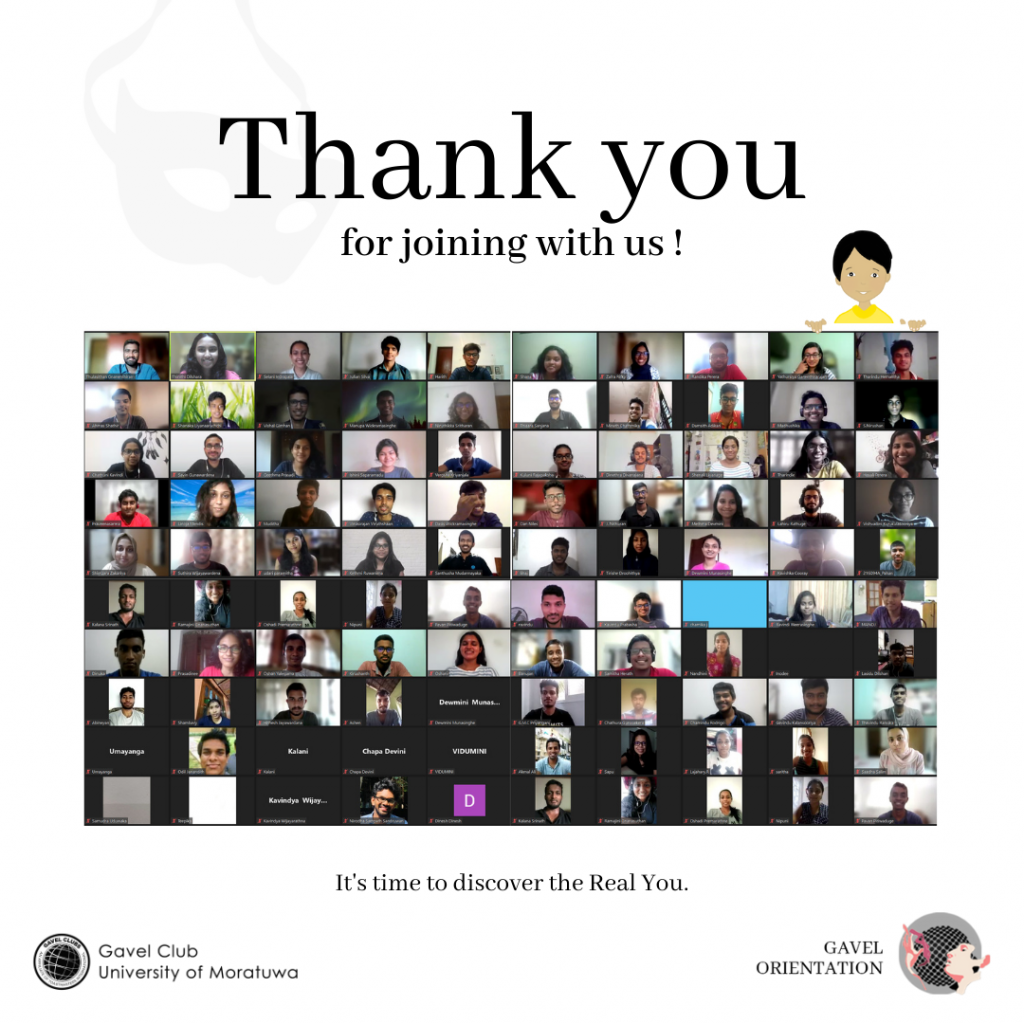