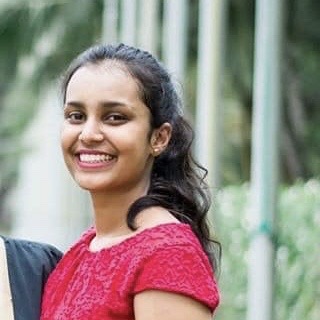 Sun had already flown away. A cold breeze was flying around. It wasn’t just another outdoor meeting, it was Valentine’s for all of us at gavel. The meeting started at our usual official time, 5.30 p.m.. It was the first meeting conducted after the appointment of our new board members. Keeping gavel traditions alive, our very own president, Amaya started her first Gavel meeting as the president. She handed over the control of the event to the toastmaster of the day, Chamuditha who had forgotten the printed agendas amidst all the excitement. He started this blissful evening with an unheard mythical story, a story of love. Every human before evolution, was born as a double person (a person who has two of each organ we have now). Then one day, that double person was separated into two humans. Chamuidtha said that, these two are eternally in search for each other. His story was able to set up the climate for Valentine’s and wind felt more warmer with it. 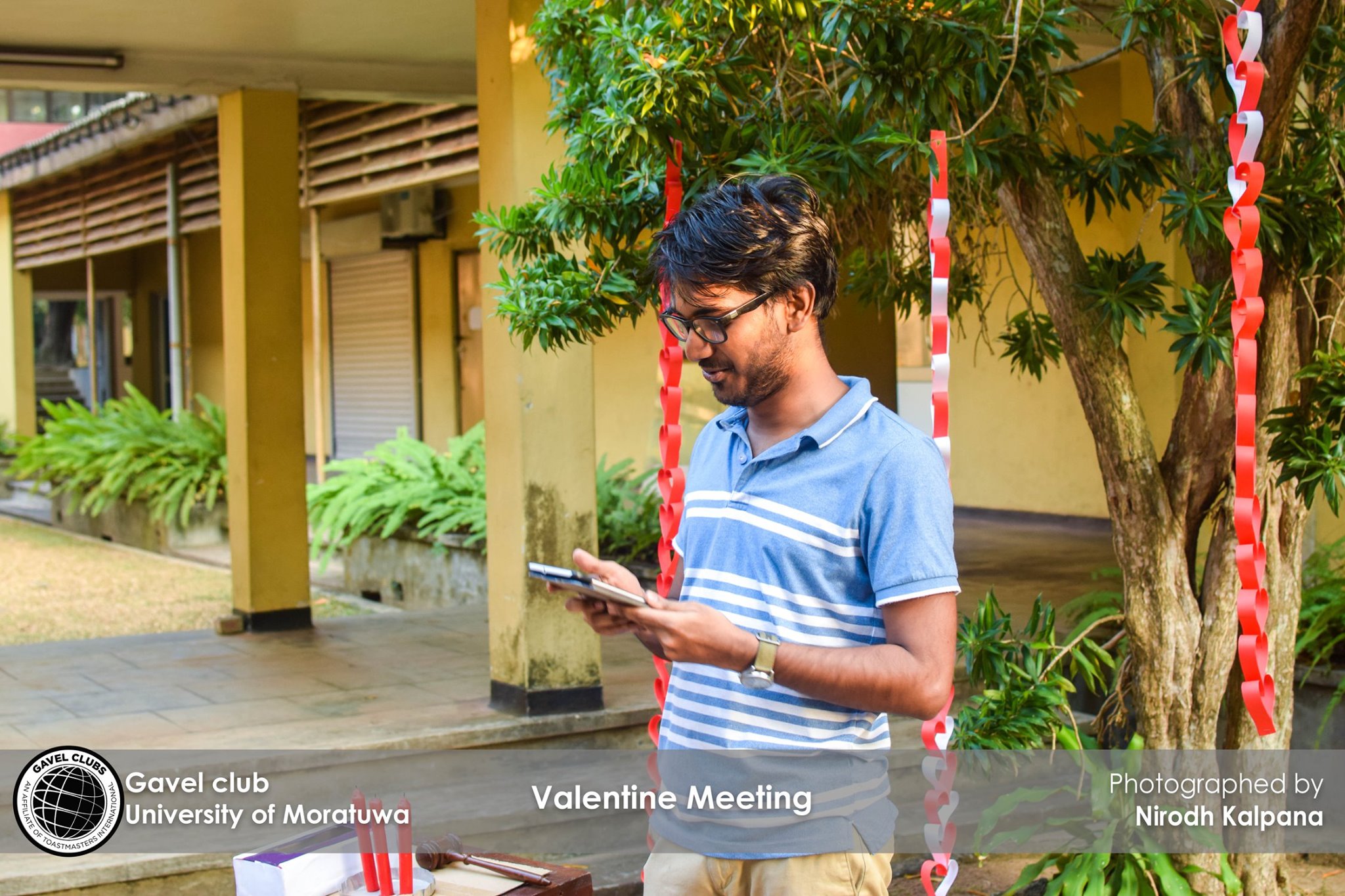 Next came the most interesting session, the Round Robin session. Chamuditha carried the Box of Love around, and it had the most cheesy, lovey-dovey topics written on chits. Everybody got the chance to share their stories on crushes, dates, breakups and so much more. It had the most awkward topics which embarrass you such as,
• The story of your first kiss
• What if the person next to you asks you out
• If the person right to you asks you out how would you reject
• Weirdest thing you have done for your crush
• How do you need your dream date to be
and many more. 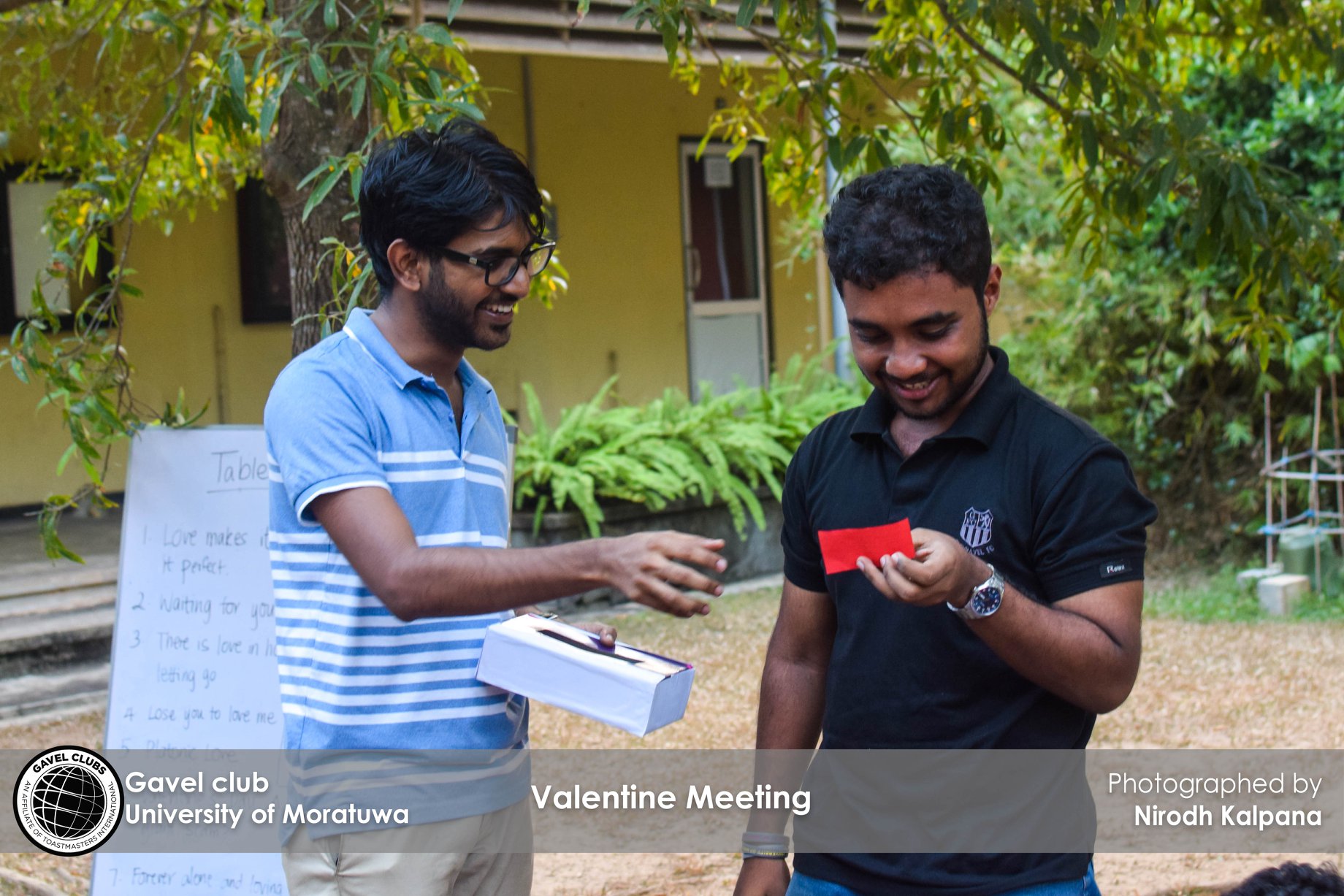 We heard stories about accidentally liking the crush’s very old Facebook posts while stalking him, we saw Senali, hardly finding words to reject the person to the right of her, Chamode. 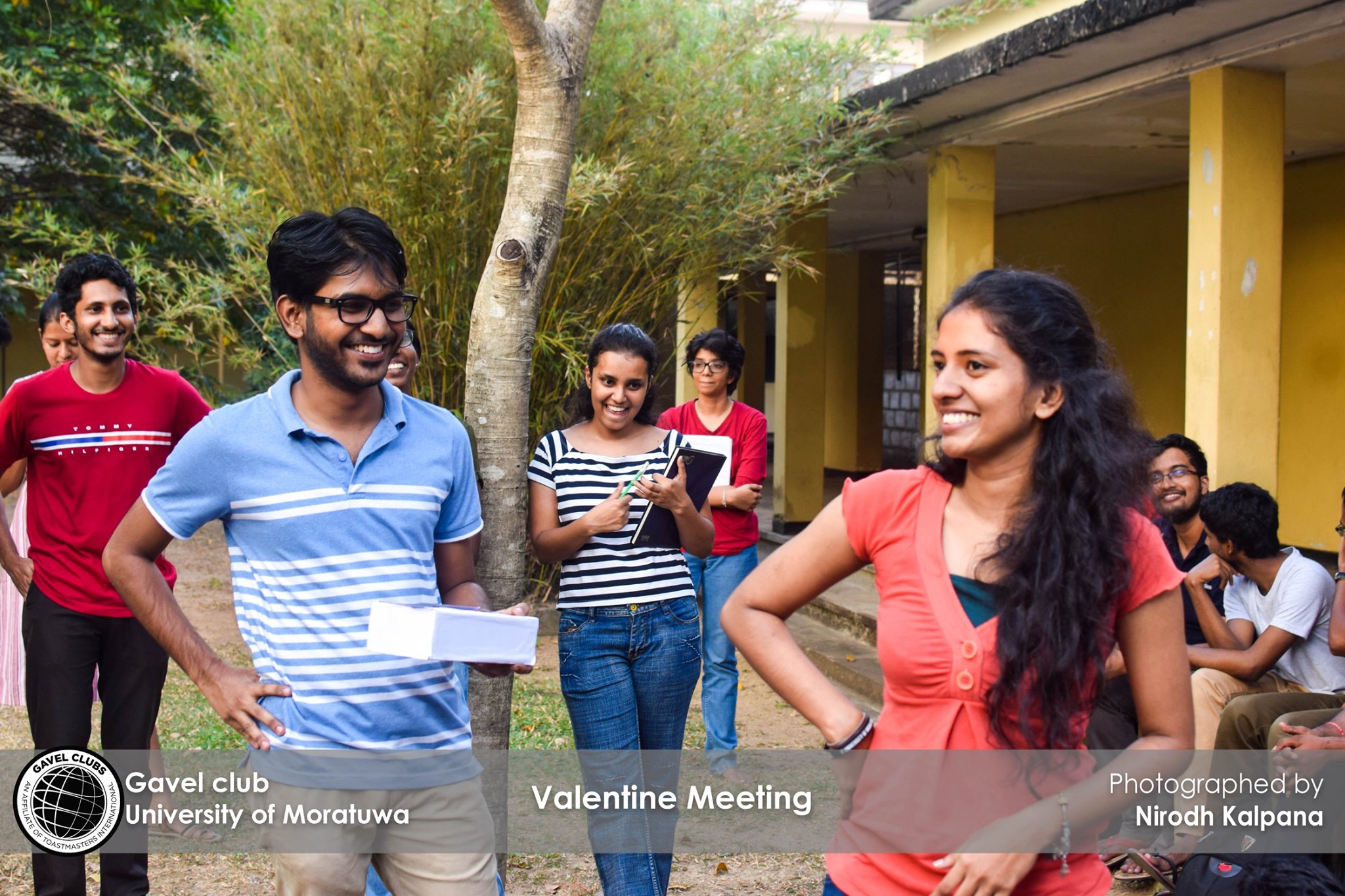 Next, the session was handed over to the sweetest personality, Minoli for the Table Topics. 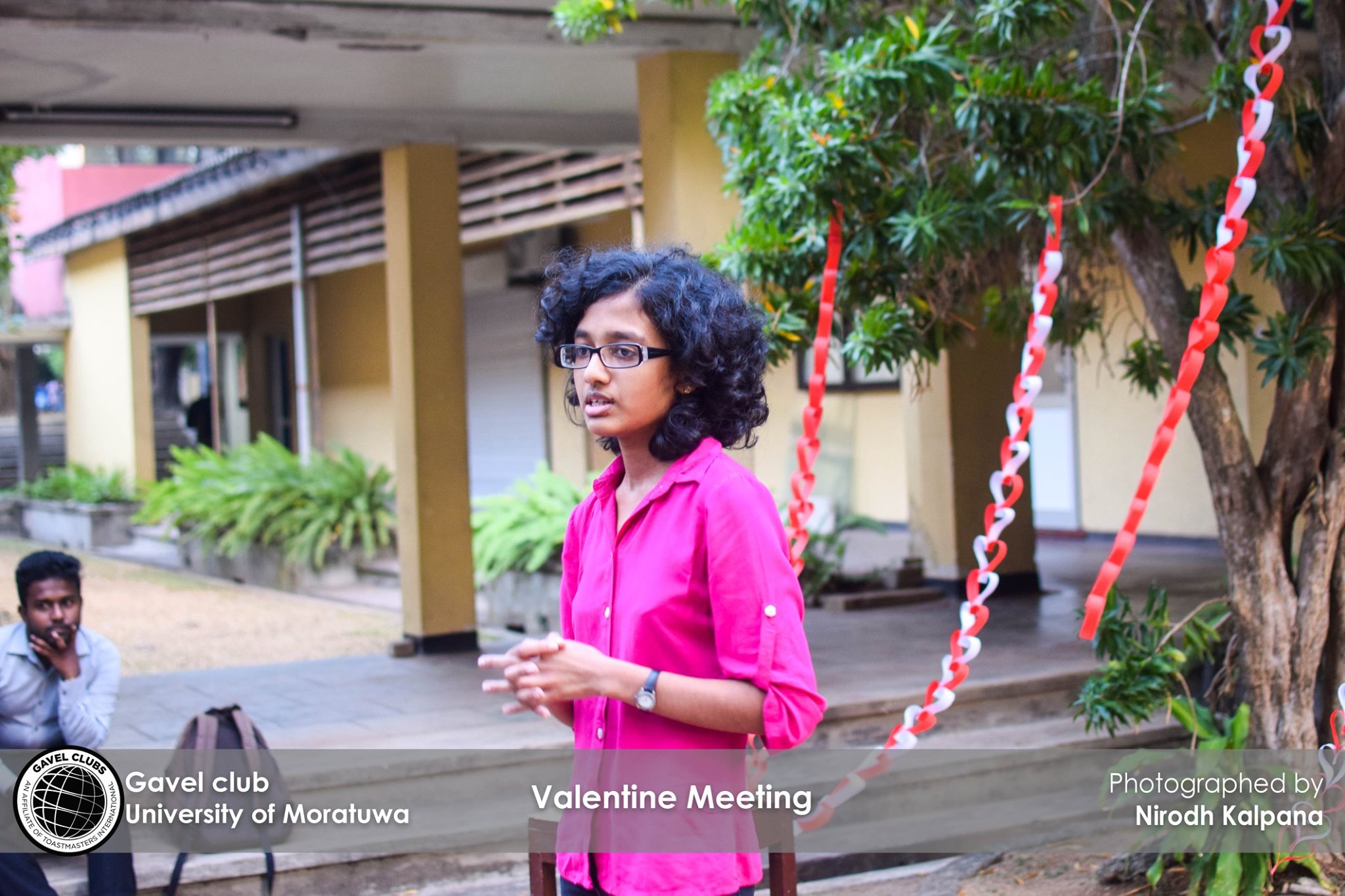 Keeping up with his usual self Akhila still managed to be the first Table Topics speaker. He shared his inside story for the first time with us which made us all remind that gavel is that one place where you won’t be judged for whatever you say. Next, we had Ayankaran speaking about his tragic love story which never happened and how he has now moved on from it. Bahavan spoke about how unrealistic it is to wait for your true love and hope to be able to actually find it. He pointed out that your true love is just one person out of 7 billion world population. He was delivering facts to the point as usual. Thishani talked about the most famous red Anthurium story of Malindi and how she told everybody that as much as there’s love in holding on, there’s love in letting go through a pretty little anthurium. She told how much she misses Malindi and all other seniors who cared them like their own sisters and brothers. Dineth told the reality behind ‘Love makes it all, Gavel makes it perfect’. It is the truth behind the family called Gavel. 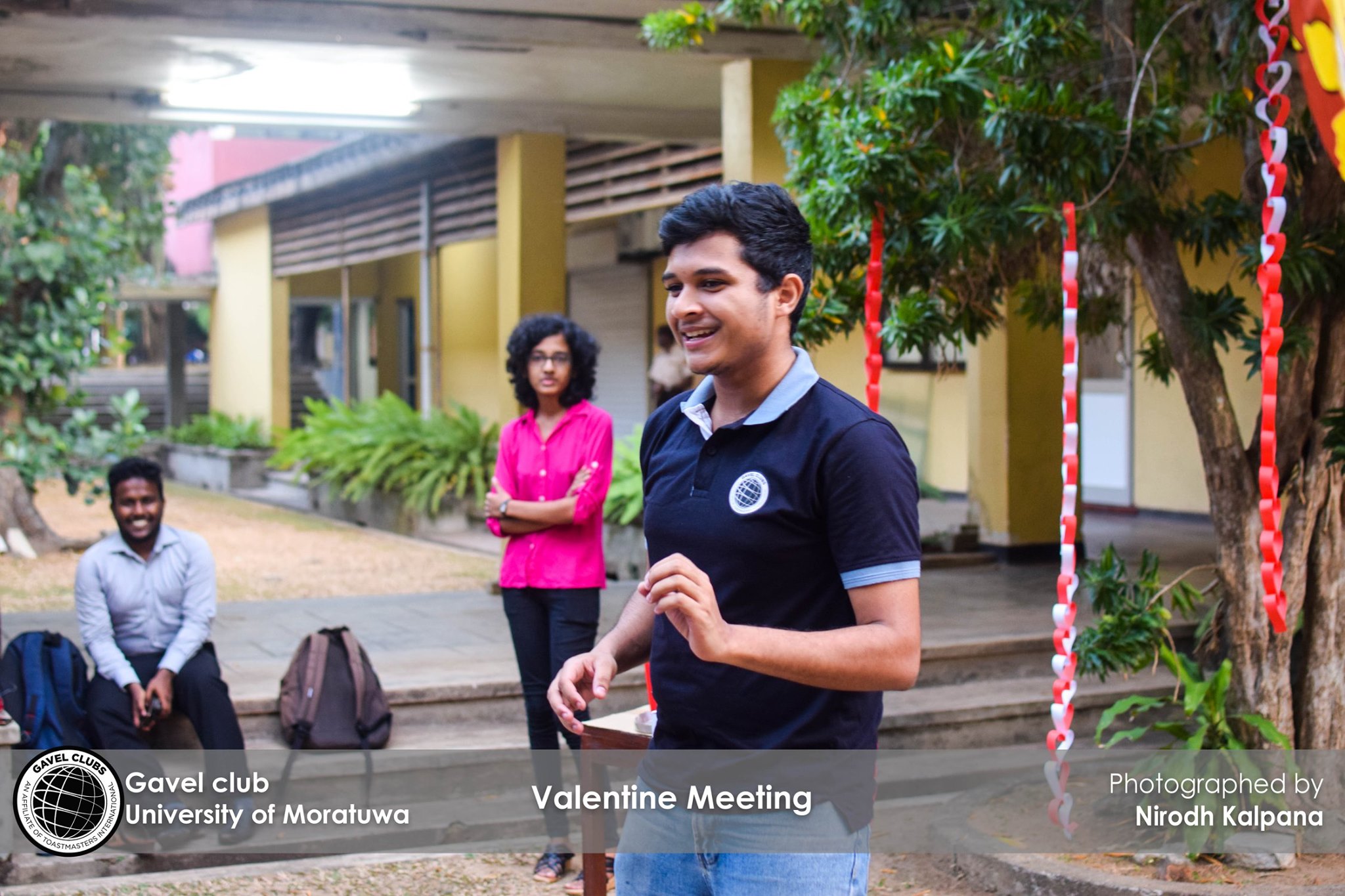 Next, we had a newcomer speaking, Shehan who stepped up to deliver his first speech. Chamod, Amri and Nirodha also had interesting stories to share. Kasun sang a song and told how much he hated boy meets girl love stories and now how he has started showing interest in love. 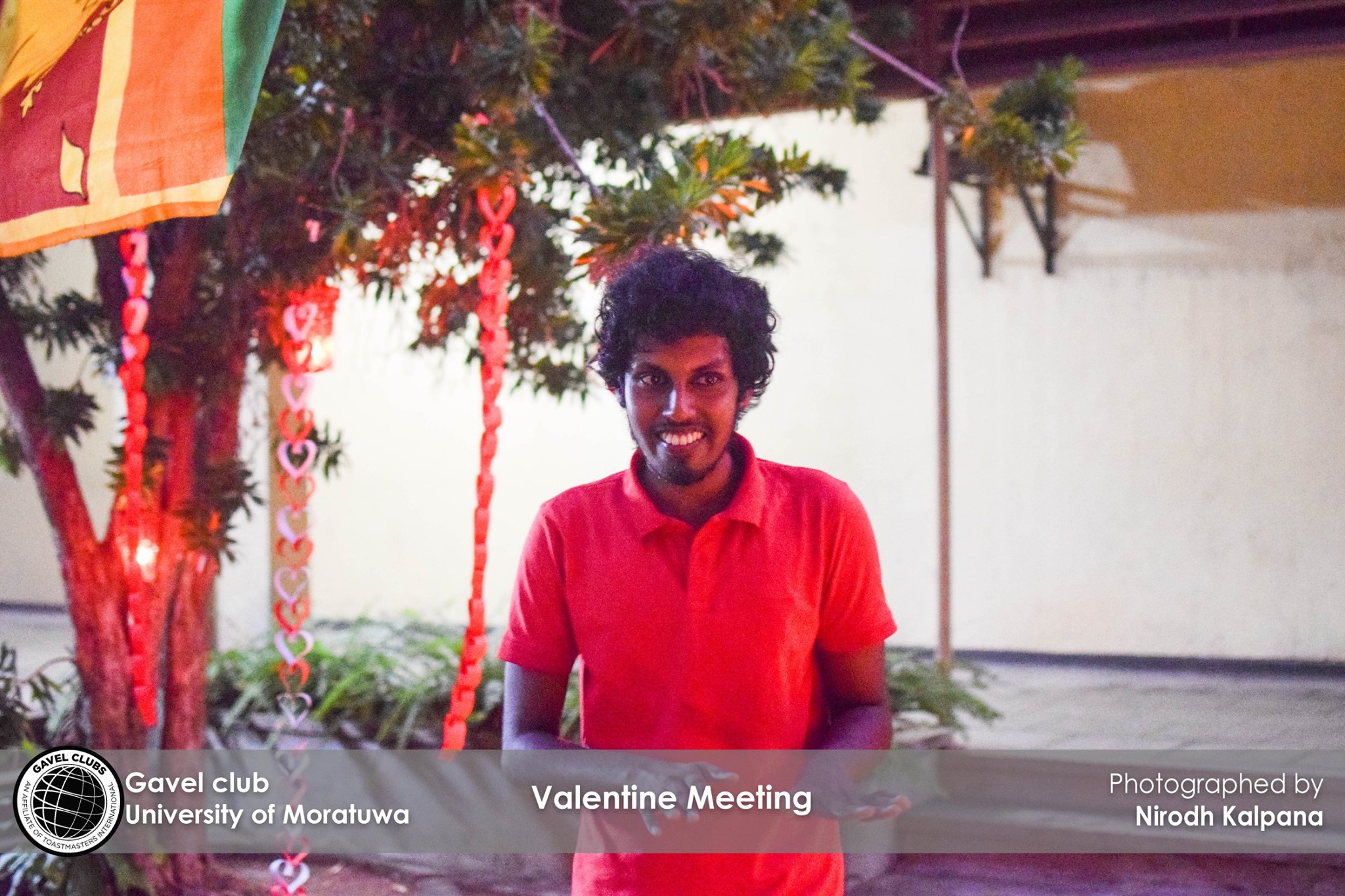 After everything, it is all about the personal space that you have in gavel. It is about the most comfortable and most supportive audience. These people will encourage you throughout your story and will cheer you on throughout your life. That is why nobody is uncomfortable about speaking in Gavel. 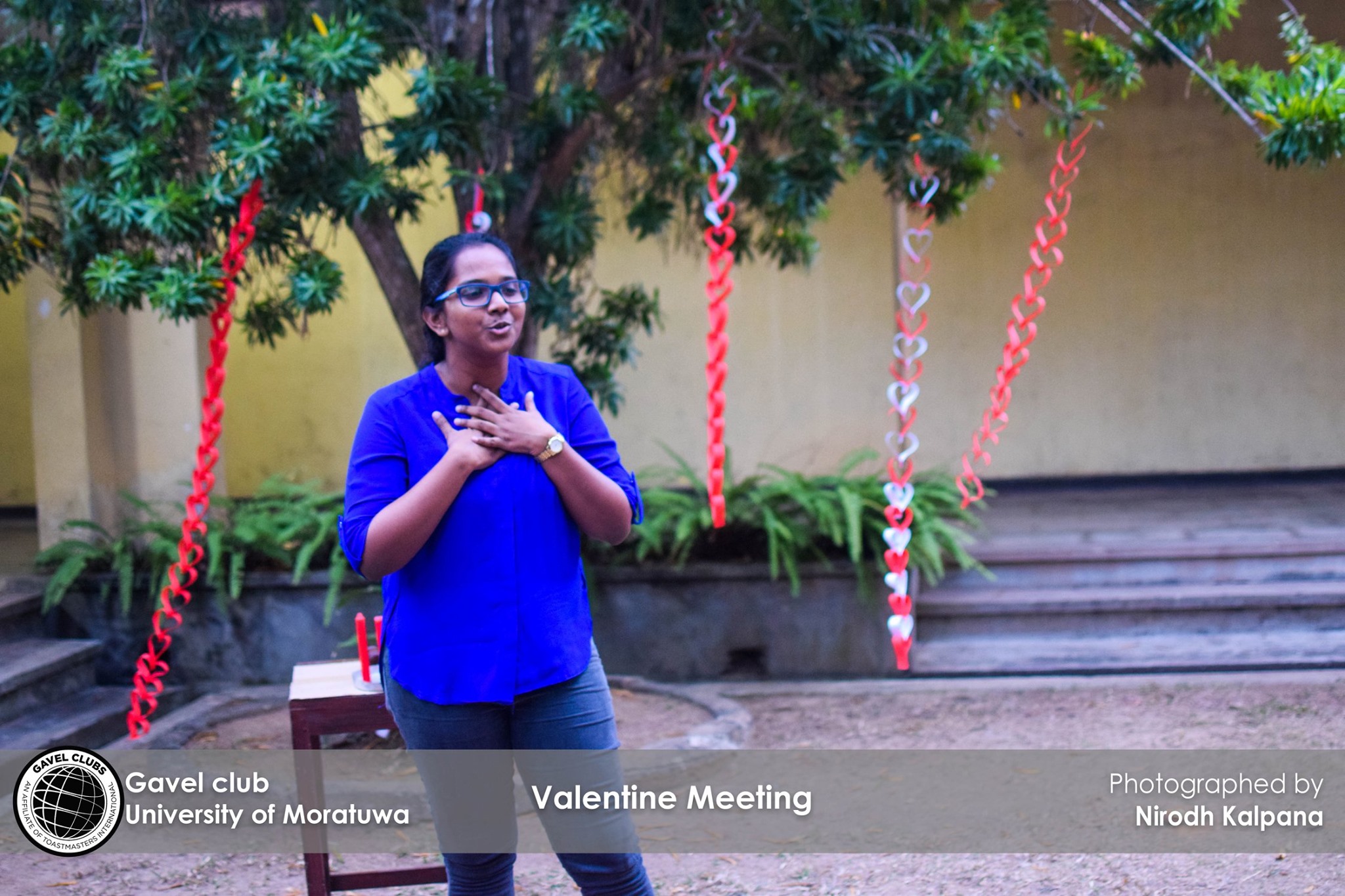 Next, we had Nirodha breaking the ice with his speech ‘To Your Aid’. He is a supporter of everyone he finds around him. It’s not just by what he said, it’s also by what we all know. Here he told his story, how he changed to be this kindhearted person he now is. Being a heavy kicker in mom’s womb, he was so energetic as a little kid, but he was bullied in school as a first-grader. When he migrated to Sri Lanka with his family, as a seven-year-old, he was put into a local college for studying where he struggled a lot. He said how much it took for him to catch up things with others, how much he tried every day and kept holding on without wanting to give up. This has moulded him to be the gentleman that he is today, today he cheers up everybody around him, he appreciates the inclusive conversations that he has with his friends and he keeps helping everyone he can.
Just like him, everybody you find in gavel will cheer you up, will help you when the going gets rough. With the sparkling lights of the candles, the wind felt warmer, the surrounding felt more comfortable and the mind felt more cheerful to embrace challenges that might come. 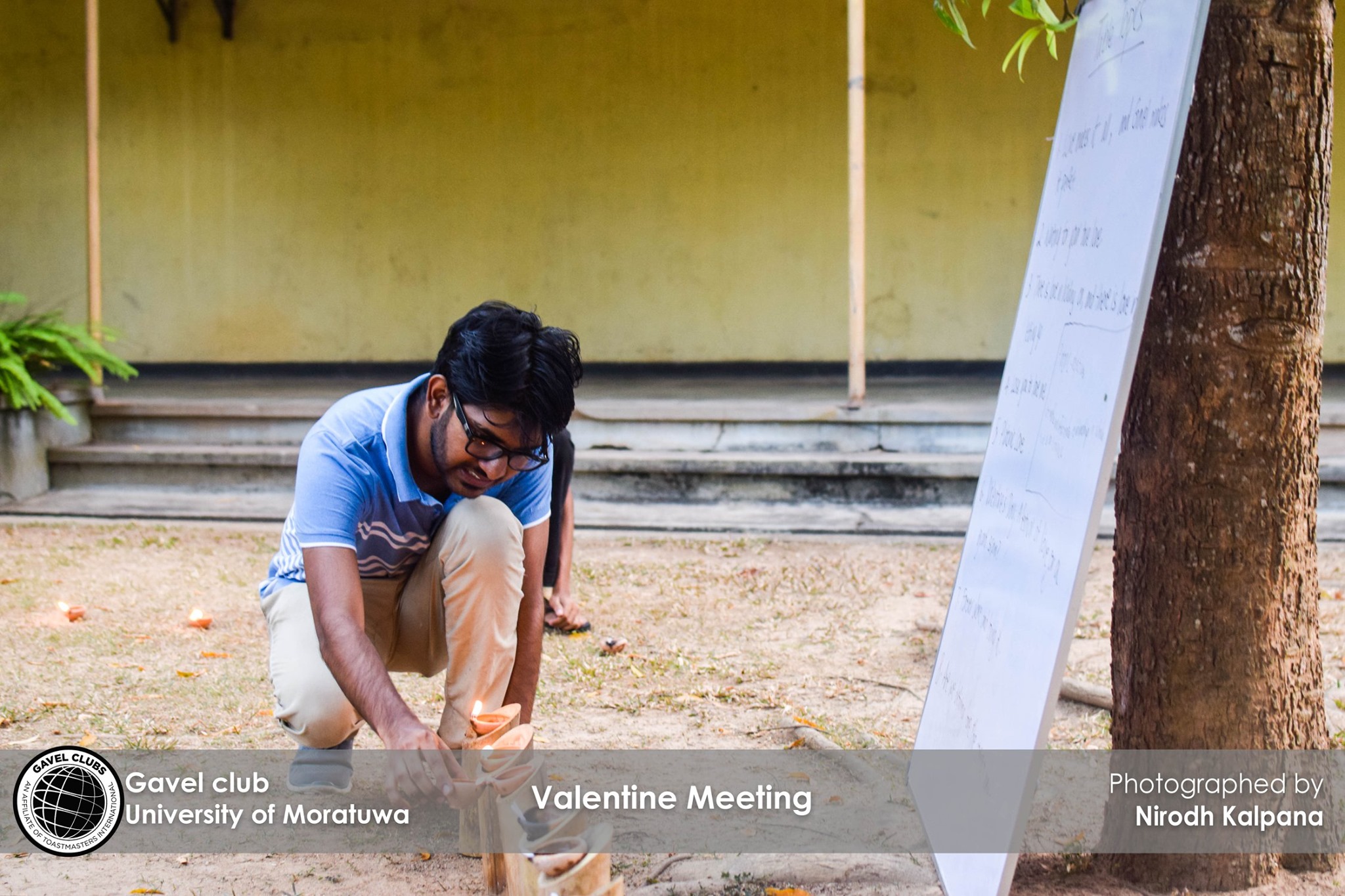 When you want to just let your hair down, Gavel has that space for you. When you want to just talk to somebody, Gavel has the best people who share the same passion with you. Gavel will always be that one irreplaceable experience for you.
Finally, the time came to wind up our valentines. We listened to the reports by our role players and the General Evaluation by Akmal. Chamuditha invited everyone to keep coming because Gavel is family. Amaya concluded the graceful evening.
Keep coming to Gavel!