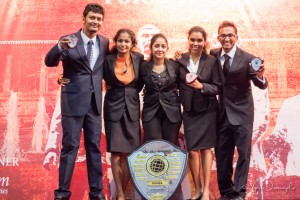 Speech Olympiad IX for the MillenniumIT Challenge Shield was launched with the preliminary round on 30th July 2015. Out of more than 50 registered competitors, the twelve best speakers were selected for the semifinals after presenting 5-7 minute prepared speeches at the Preliminaries.  During the semifinals, they were given the challenge of making a 1-2 ½ minute impromptu speech in addition to the 5-7 minute prepared speech. On 7th of August, the semifinalists including Darshana Pubudu, Samadhi Poornima, Sapthika Jacob, Kasun Kodithuwakku, Sandaru Seneviratne, Samavath Mallawarachchi, Ama Kalpani, Thilina Madumal, Sandaru Suranjaya, Dulanjan Uduge, Rochelle Silva, and Kasun Harshana battled for a spot at the grand finale. 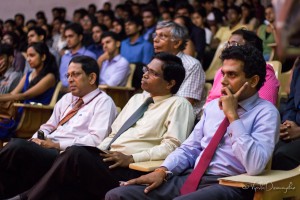 After a thorough evaluation of both the impromptu and the prepared speeches, the university’s five best public speakers were selected for the Grand Finale, by a panel of eminent judges who are actively engaged in the Toastmasters movement.

The Grand Finale of Speech Olympiad IX was held successfully at the Civil Auditorium on 19th August 2015. The Vice Chancellor of the University of Moratuwa presided over the event while the Deputy Vice Chancellor attended as a guest of honour of the evening. The judge board of the Grand Finale was led by DTM Srianthie Salgado who has been a dedicated supporter to the event since the beginning. 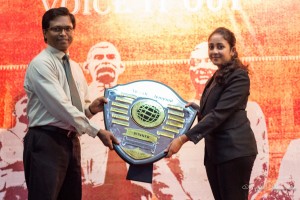 As finalists, Sandaru Suranjaya (Electrical Engineering Department), Samadhi Poornima (Computer Science and Engineering Department), Sandaru Senevirathne (2014 Batch- Engineering Faculty), Samavath Mallawarachchi (Chemical and Process Engineering Department), and Ama Kalpani (2014 Batch- Engineering Faculty) awed the audience with both prepared and impromptu speeches. Their captivating performances enthralled undergraduates of University of Moratuwa and invited universities, corporates and parents who claimed they were lucky to have witnessed such talent. Samadhi Poornima emerged as the winner after a truly inspiring speech in the prepared speech session and also arguably one of the best impromptu speeches in the competition’s history. The pursuit of the title for the “most popular speaker” created a buzz among the competitors and their numerous supporters within and outside the university. This much sought after title was awarded to Sandaru Suranjaya who was also the 1st runner up while Samavath Mallawarachchi emerged as the 2nd runner up.

Several weeks of untiring efforts led by the president of the club Vibhanu Arachchige and the two project chairs Timal Mohan and Merl Chandana, culminated in an event of unprecedented grandeur. They were constantly supported by all the present and past members of the club. MillenniumIT, which is a leading innovative trading technology business whose systems are used by exchange businesses around the world, acted as the strategic partner of the event.