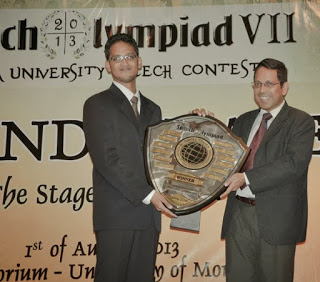 The
Gavel Club of University of Moratuwa, an affiliate of Toastmasters
International, commenced the 7th volume of its flagship event,
Speech Olympiad VII for the Imperial College Challenge Shield with its
preliminary rounds falling on the 2nd of July 2013 and the
Semi-finals on the 16th of July 2013. This event is one of the most
anticipated events in the University Calendar among the students from all three
faculties of the university.
The
contest, Speech Olympiad, is organized for no other purpose than for the
betterment of communication and presentation skills of the undergraduates of
University of Moratuwa. The event is reputed for its ability to uncover the
hidden and unseen skills of the undergraduates which will undoubtedly aid them
in their road to success. This is proven by humbly but proudly acknowledging
the fact that Speech Olympiad has produced winners and finalists in contests
such as the ‘Inter-university Speech Contest’ and ‘All Island Best Speaker
Contest’.
Contestants
from all faculties and departments took part in the preliminary round of the
competition, out of whom the twelve best speakers were selected as
semifinalists, the best five out of them, ventured into the Grand-Finale, and
contended to be crowned as the best public speaker of the university of
Moratuwa, and for the Imperial College Challenge Shield for Speech Olympiad
VII!
The grand finale, which was held on the 1st of August
2013, in the Auditorium of the Department of Civil Engineering of University of
Moratuwa, was graced by the presence of the Deputy Vice Chancellor of
University of Moratuwa, Professor Rahula Attalage, who admired the efforts of
the students who were tirelessly involved in the process of organising such a
spectacle to such great effect. Mastering the ceremony and chairing the contest
was done by the Vice President-Education of the Gavel Club of University of Moratuwa,
Hasini Abeywickrama. The panel of judges comprising of Distinguished
Toastmasters was spearheaded by none other than the Club Coordinator,
Distinguished Toastmaster Zameen M. Saleem.
After thorough and difficult evaluation of the equally competitive
prepared speeches by the five finalists; in the order of Hasindu Siyambalape of
the Department of Chemical and Process Engineering, Dinesh Kenady of the
Department of Transport and Logistics Management, Akshika Wijesundera of the
Department of Computer Science and Engineering, Mohamed Yasir of the Department
of Civil Engineering and Rafidh Rifaadh of
the Faculty of Architecture, they were required to make an impromptu
speech of 1 to 2 ½ minutes on the topic “A thousand-mile journey begins with
one step”. And after the conclusion of both rounds, the panel of judges
announced their results. Mohamed Yasir was dubbed the 2nd Runner Up
of the contest and Hasindu Siyambalape came Runner Up. And despite the close
competition, the winner of Speech Olympiad VII, whose name will be etched into
the Imperial College Challenge Shield for Speech Olympiad was none other than
Rafidh Rifaadh. Akalanka Samarasena, one of the project co-chairs extended the
gratitude of the club to all parties who helped in numerous ways for such a
successful event.
Being the only entity operating within the
university with the sole intention of the enhancement of soft-skills of the
undergraduates- particularly their presentation, public-speaking and leadership
skills, Gavel Club of University of Moratuwa provides a sound platform on which
they can burnish their skills by following the internationally accepted
methodologies followed by Toastmasters International.
The flagship event of the Gavel Club of
University of Moratuwa, Speech Olympiad is a spectacle not to be missed
by anyone who would admire the clash of wits and words of brilliant young
folks, which enlightens the masses of the importance of public speaking, and
brings the unheard voices and opinion to the spotlight by providing them with a
stage!
Damith Senanayake
Project Co-Chairperson
26th July – 2013 – Daily
Mirror