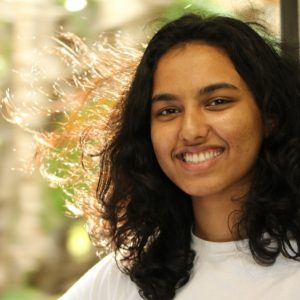 “And now, we are one step away from witnessing the rise of the 14th champion of this incredible contest.”

This year, we witnessed one of the most competitive preliminary rounds in Speech Olympiad history at University of Moratuwa, with a whopping 80 submissions. Amidst the many enthusiastic participants, 12 talented speakers were chosen by the judges to share their stories on the Semi-Final stage. But first of all, let me take you back to the preparations for Speech Olympiad XIV Semi-finals, a week before.

With the announcement of the semi-finalists on the 3rd of October, they were briefed on the proceedings of the competition, and the preparations began. The speakers started revising and rehearsing their speeches with their own mentors who had helped and guided them through the preliminary round. A very illuminating session was held by Samadhi Poornima, the champion of Speech Olympiad IX herself, to guide the semi-finalists on doing Impromptu Speeches. Another session was organized to help the speakers polish up on their delivery techniques, and much gratitude goes to Kasun Ranasinghe, Champion of Speech Olympiad X, and Shahan Fernando, Best Prepared Speaker of Speech Olympiad XII, for spending their valuable time helping the competitors. The final session was held on Friday by TM Roshantha Jayatunge, the Toastmasters District 82 Champion of Table Topics contest in 2013, on the techniques of impromptu speaking. The session was very insightful and helped to boost the confidence of the competitors. The Chief Judge himself met with the semi-finalists on Saturday and went through the guidelines and procedures of the event.

Amidst the intense training, the semi-finalists were pulling out all the tricks from their bags to ensure that they could deliver their stunning speeches to perfection, from the comfort of their own homes. The late-night technical checks, precarious(yet ingeniously constructed) camera setups, and the freshly painted walls speak volumes about their endless energy and enthusiasm.

While the semi-finalists were kept busy, there was plenty happening behind the scenes to ensure the program went flawlessly. The Contest Chairs, Moderators, Timers, Sergeants-at-arms, Zoom Masters, Flow Managers and Streamers were assembled and briefed. Furthermore, a complete rehearsal was done on the day before Semi-Finals to ensure that every small detail about the virtual Semi-Final round has been covered and clarified. Every technical aspect was checked and backups were arranged to ensure the smooth flow on the day of the event. After a week of diligent practice and careful preparation, soon it was time for the much awaited day.

Afterwards, the contest chair announced the rules and regulations of the round, and the contest began. The 1st speaker, Nathasha kicked off the session with her speech “A Wrong Judgement”, highlighting the importance of looking beyond the surface before making a judgement. Next, Selani spoke on how you should not shake yourselves when someone fills you with self-doubt with their comments, but just “Let It Settle”. Paul inspired the audience to break the limits that were set by others and themselves, to become limitless, in his speech titled, “Know Your Limits”.

Saeedha did a funny but insightful speech titled “Hold Your Horses”. Her analogy of life to a marathon was a much needed reminder for us to slow down in the high-speed lives we live at present. The 5th speaker Savin made an important statement about how terrorism begins and how we can stop that from happening by appreciating equality and removing discriminations among us to make the world a better place, in his speech titled, “It Begins with You”. Dineth’s highly entertaining and prop-ridden speech titled,“Build the Trust Before the House” spoke about how important trust is in any relationship, as he compared it to the glue which keeps a house upright.

Niruthikka’s speech, “Play the Game” compared life to a game, where all the side quests, failures help to improve and strengthen us to take on life to the fullest without giving up. Namina took a superhero stance, while encouraging us to live in the moment without fearing failure so that we can do wonders in our life, in his inspiring speech titled, “Do not Fear, Namina is Here”. The 9th speaker, Shenali, in her speech titled, “With All Due Respect”, spoke on the true meaning of respect and used her own life experiences as examples.

The 10th speaker Sarasi made an important statement about how you should never miss an opportunity and how you should never give up on your dreams just because of some  weaknesses you may have, in her speech titled “Scholarship and Stomach Ache”. Charithma had an inspiring  speech titled “You are a Diamond Darling” and convinced the audience to stop hiding because of others’ judgements and express our true colours as diamonds because no one can break us. The final speech, “Paralysis by Analysis”, by Zafra took a humorous approach in encouraging the audience to be a bit more spontaneous and stop overanalyzing.

With the conclusion of an intense and entertaining prepared speech round, a  short break preceded the impromptu round. 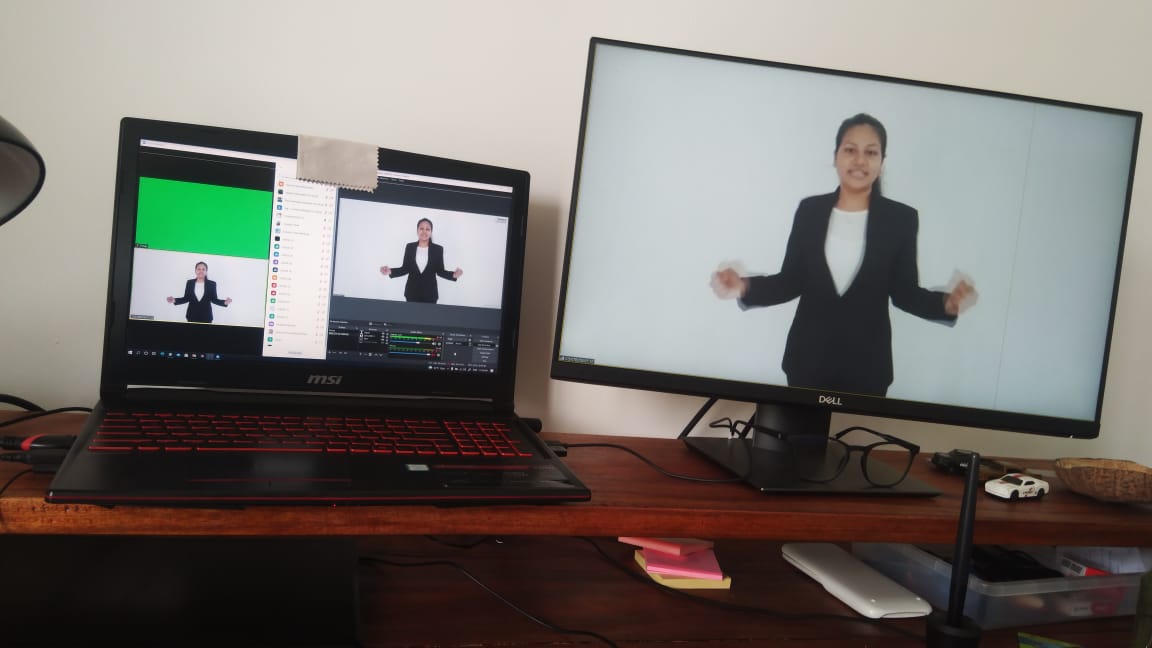 It definitely seems near-impossible to conduct a virtual impromptu speech contest. However, we knew that it was simply a matter of determination, concentration and an exhausting amount of rehearsals. In short, we knew that with enough dedication, anything was possible. ( We drew inspiration from our extremely eloquent speakers.)

With everything organized to perfection, the Impromptu Speech Round commenced with the Contest Chair, Jayoda Dissanayake introducing the speakers. The contest room started accepting the speakers for  the impromptu session, and every speaker was given the same topic, which was “Silence isn’t Empty, it’s Full of Answers”. Each speaker was given exactly two and a half minutes to prepare for the speech. With that, one by one, contestants came out of the lobby, delivered  the speech in the contest room, and were finally assigned to one of the three final rooms. Much to everyone’s amusement,  the contestants in the lobby as well as the final rooms were required to keep their hands up as if they were held at gunpoint, since the sergeants-at-arms had  to make sure that the topic for the impromptu session wasn’t disclosed .

During the session, all the role-players kept communicating through the WhatsApp group, keeping track of who was speaking, who were anxiously awaiting their turn in the lobby, and who were being held against their will in the final rooms. It is worth mentioning that all the contestants did an amazing job in relating the topic and delivering it in their own way using different stories, experiences, and even songs to give their best for the impromptu session. Once the final speaker finished,everyone gave a silent hurrah to celebrate the end of the impromptu session.

The moderator came back once again to wind up the Semi-Finals of Speech Olympiad XIV while announcing that the finalists will be revealed soon.

Meanwhile, all the contestants and sergeants at arms gathered into the lobby to relax and unwind after the intense competition. A room full of Gaveliers naturally means a lot of chit-chat, jokes, laughs and good fun. When the realization hit that we’ve all been in a Zoom meeting for 5 long hours, all the hardworking Gaveliers patted themselves on the back for a job well done, concluding the event successfully. Kudos to all the semi-finalists for setting the stage on fire with their passionate stories and all the role-players who worked in perfect harmony to make sure, Speech Olympiad XIV Semi-Finals went as smoothly as possible.

At the end of the day, 5 Finalists were chosen by the judges and announced. 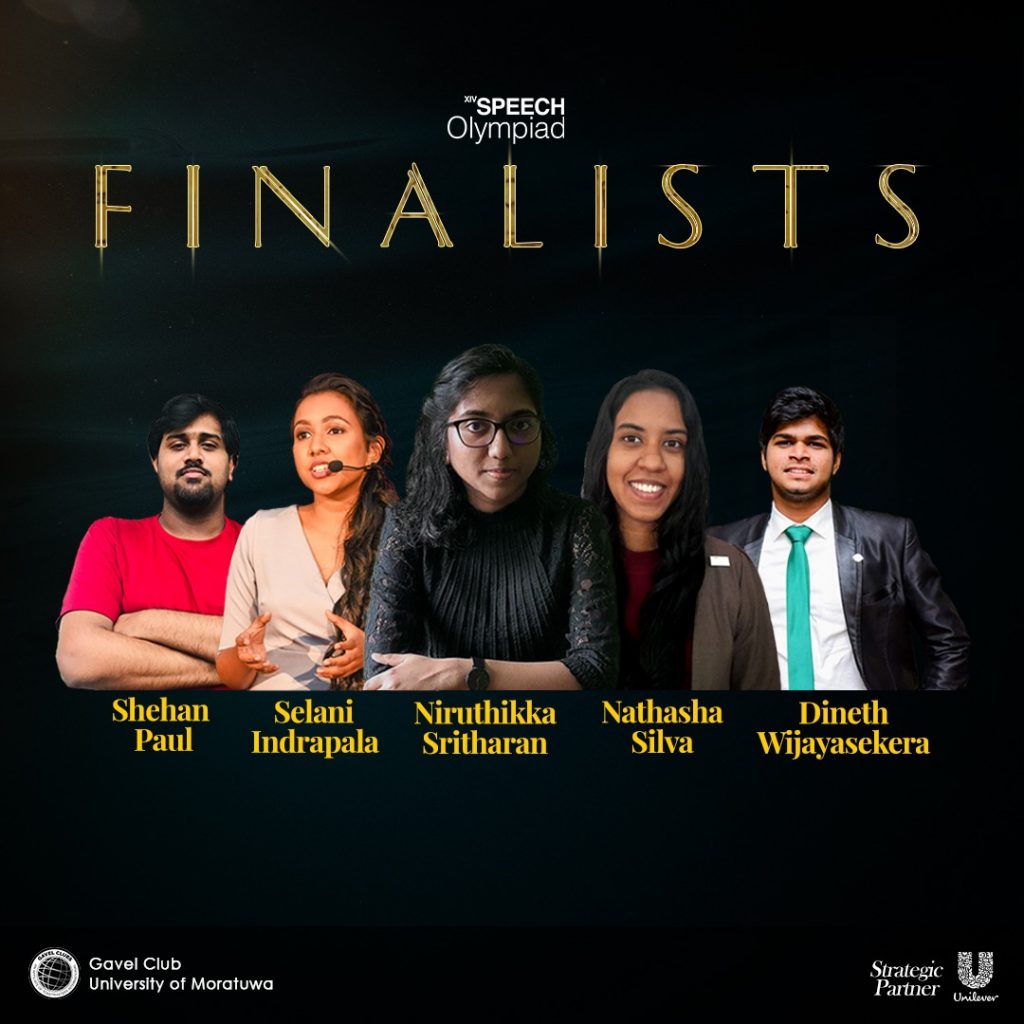 A hectic yet memorable day came to an end with everyone appreciating the semi-finalists for their amazing speeches and showering the finalists with many congratulations for getting another step closer to the crowning glory of Speech Olympiad XIV.

The legacy of Speech Olympiad lives on and the final chapter awaits.