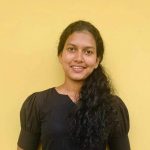 Valentine’s Day was around the corner. But what do you think reminded me of Valentine’s Day so early this year? Was it a bunch of flowers from an unknown lover? Or was it the chocolates sent by my lover? No. It was just some words in a text message.

“Hey… Would you like to be a game master at the Valentine’s themed Gavel meeting on the coming Saturday 12th Feb?” The text was from our table topics master, Amirthavarshani. Just like how Christmas came so early with Gavel, this time Valentine’s came early with the love of our Gavel family. Just like most of the Gavel meetings that were held recently, Valentine’s meeting was also a virtual experience. But that could not stop me from thinking how fun it would have been if this was held physically. Then again I felt happy because we could have the same fun even via zoom.

As for all the other educational meetings, a WhatsApp group was created. And I swear this was one of the funniest WhatsApp groups I have ever joined. Since food was the most relatable thing when it comes to love, a romantic dinner was decided as the theme. All the Gavel members were invited for an exquisite candle lit dinner underneath the stars at the most romantic restaurant in town which served love as the dessert along with delicious food, hosted by the two most hospitable hosts Namina and Amirthavarshani.

‘The moon smiled, The stars twinkled,

But both were envious of your stardust souls’

The 460th Valentine’s themed Gavel meeting started with the meeting being called to order by our president, Dinidu who was dressed in a red t-shirt. Not only him, all the other members were also dressed in red, the color of love. And it looked exactly like a Valentine’s dinner party.

Dinidu started with a quote saying “food is the food of love”. Of course! I totally agree with him. I think, if not for food, most of the love stories would have ended within a short period of time. As Patrick Wanis puts it, “Food incorporates all the other five languages and all five senses. It’s a very powerful way of creating a connection and expressing love”. Therefore food is said to be the sixth language of love.

The meeting controls were handed over to our host, Namina, who mesmerized us with his voice singing the famous song from Aladdin “I can show you the world…” inviting us all to hop on as he takes us on a magic carpet ride. Candle-lit dinner nights are the perfect date nights for Valentine’s day. Therefore even the role players acted the part by being the staff of the restaurant. The barista of our restaurant, Sandil, had to keep track of time because he had to serve beverages to our customers on time. Maître D’ of our restaurant, Anuki, had to keep an eye on the Ah’s and Um’s our customers made, making sure that they had no complaints. Imanthi, the sommelier aka the wine expert had to come up with the best word suited for the meeting, which was ‘sentimental’. They made sure that the customer service of their restaurant was perfect and everybody was happy at the end of the day.

All the lovers had to face the round robin session. It was a bit different from the usual round robin sessions and was filled with love and laughter. All the members didn’t have to answer the same question. Instead they had to choose a dish which was displayed on the screen and one question word from either ‘what’ or ‘how’. Those two combined to reveal the question that will be our round robin topic. It was pretty interesting. There were very easy questions like “what is your favorite love song?” and “what is your perfect Valentine’s day dinner?” (which turned out to be pizza btw) and also some very serious questions where the members were silent for seconds as they could not figure out the answer instantaneously. Let’s try to answer some of the serious questions. “How will you introduce your boyfriend to your parents?” “How do you express your love?” “How do you assure that your boyfriend/girlfriend loves you?” Not only that if you are a lover or someone willing to be a lover, you guys would have probably gotten some great ideas to celebrate your Valentine’s day. Some said that it was exactly why we had the meeting early on. With all that goodness, the round robin session ended in fun and laughter.

What’s the point of having a Valentine’s day dinner party let alone any party without some music? Next we were all treated to the melodious voice of Imanthi singing the famous love song by Elvis Presley “I can’t help falling in love…” to which we swayed and sang along in our very own homes.

Then the meeting controls were handed over to our hostess Amirthavarshani. The table topics session presented us with a menu showing the main courses for the day. All the table topics were surprise topics. We had to select one of the main courses and then we would be directed to the table topic that we could enjoy with our lover. Some ideal dishes for a romantic dinner were displayed there on the menu. The very sight made us hungry.

The surprise topics really did take everyone by surprise. Chamuditha, who chose ‘marry me chicken’, talked about his experiences as he walked through a flower garden. He even looked the part with his all flowery background. With the dish ‘love pizza’, Madhushika talked about the most embarrassing moment she faced in front of her crush and how she would continue to make many more so that she’ll be able to share them with us in the next Valentine’s day meeting. Aynkaran who went with ‘passion pie’ went on to describe that movie which would make him fall in love. Hasali who chose ‘creamy dreamy steak’ described exactly what her dream lover should be like. With the dish ‘spaghetti con amore’, Paul did an insightful take on how Valentine’s day was not only for couples but for singles as well, not giving the singles a chance to whine and complain. Thinithi, who chose ‘lovely dovely potatoes’, described how love and friendship are indeed related to one another. Suthira, who went with ‘heart pumpkin tart’, told us the story of how he came to love food because of his childhood friend and how food became his first love (a topic that was added as gratitude since we were in a restaurant, I guess). The speakers were so excited and they all managed to come up with heart-touching stories despite the surprise topics they got.

The final course on the menu, the desserts, were the most awaited games. All the breakout rooms were named after different romantic desserts. Cheesecake (my personal favorite), tiramisu, macrons, pecan pie, forest cake and chocolate mousse were the desserts on the menu. And they tasted like heaven. The patisseries of each dessert were Selani, Shenali, Shanaka, Yathursiya, Sandil and Anuki respectively. The first game we had to play was finding Valentine’s day related words in a word puzzle. The game was really tough and it was extremely difficult to find the words, which made it even more funnier, as we started circling random words we saw in the hope of getting points, unsuccessfully.

Afterwards, our hosts announced the winners of the dessert course. The first place was won by group cheesecake led by Selani with group chocolate mousse led by Anuki becoming a close second. Finally the controls were handed back to our president who officially ended the Valentine’s Day meeting, which was a romantic dinner special indeed!

But more fun was yet to begin for then came the moment where we couldn’t resist our happiness and laughter anymore. As per tradition, the hosts were asked to do a vote of thanks in Sinhala without using English. We had so much fun listening to the newly created Sinhala terms for the English words. With that, the Gavel Valentine’s dinner came to an end with all the love and warmth of our Gavel family. 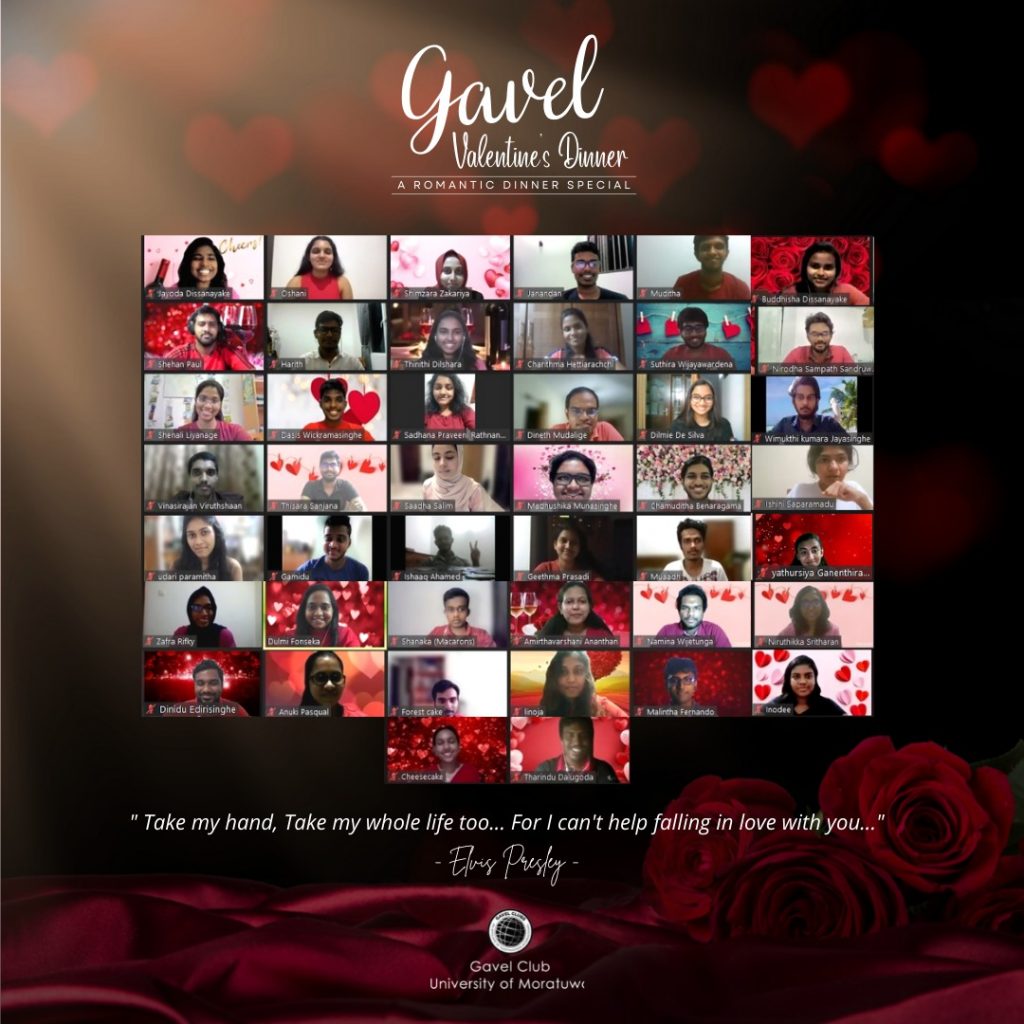