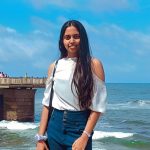 “Not all treasure’s silver and gold, mate.”

After two years of online lectures and online Gavel meetings, not many could say that they knew the university premises like the back of their hands. So, what better place could there be than the university to hide a treasure? 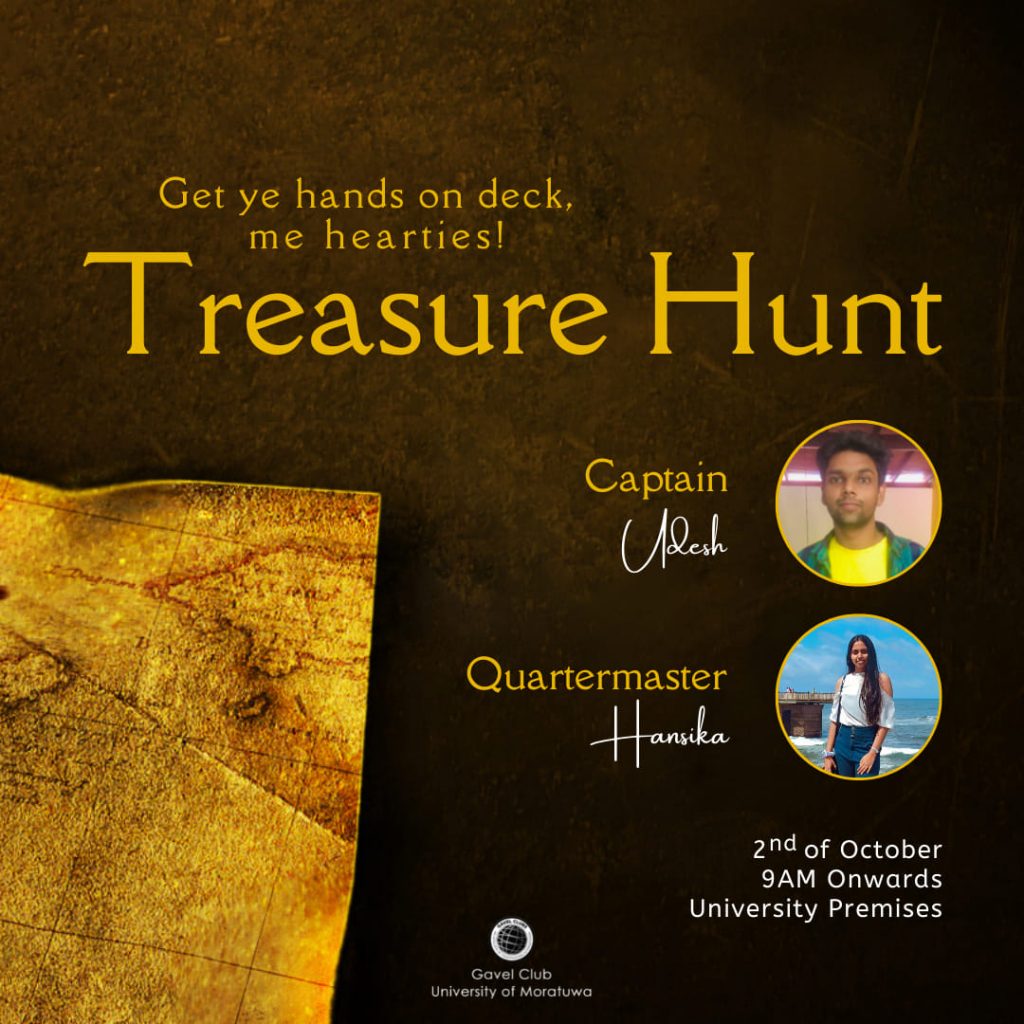 Brimming with excitement, on the 2nd of October, the Gavel family stepped outside of the four walls of their homes and gathered at Lagaan to join the promised treasure hunt.

With their flags hoisted and vessels ready, they were ideal pirates, eagerly waiting to get their hands on the first clue.

Despite the enthusiasm, the meeting started a good 30 minutes late because the role players were seeking a proper hiding spot for the treasure. Nevertheless, it was started in style, by President Suthira Wijayawardena who warmly welcomed all to the 489th Educational Meeting and Treasure Hunt. Then the meeting controls were handed over to Captain Udesh Dangalla.

Captain Udesh Dangalla welcomed all the Gavel hearties on board and started the Round Robin session with the topic, “What is the most valuable treasure in your life right now?”.  And no, it was not silver or gold, but for most, it was very close to it; their laptops and other electronic devices. Given the economy these days, electronics truly are treasures for all of us. For some, it was the hours of sleep they get, and for others, what they treasured most were their family and friends. As the Round Robin session came to an end, the Gavel was handed over to me, the Quartermaster, by Captain Udesh Dangalla.

Instead of the everyday Table Topics session, the latter part of the meeting was a treasure hunt, which everyone was eagerly waiting for. As the Quartermaster, I briefed everyone about the game, guidelines, and rules. Then everyone present was separated into four groups with a moderator for each team to make sure that every team abided by the rules. Then each was given its initial clue to follow the path towards the treasure. The moment they got their hands on that tiny piece of paper, they started running away from Lagaan with excitement rushing through them, searching for the treasure. 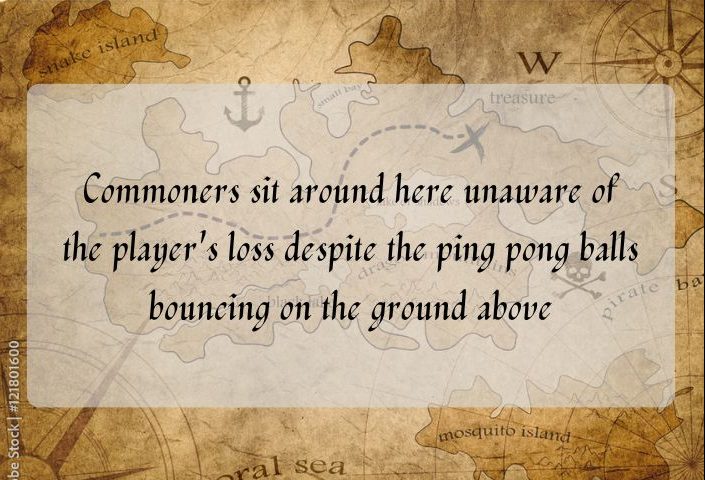 This led the teams towards the Gula Canteen where they found another piece of paper with a clue to find the next location to reach. 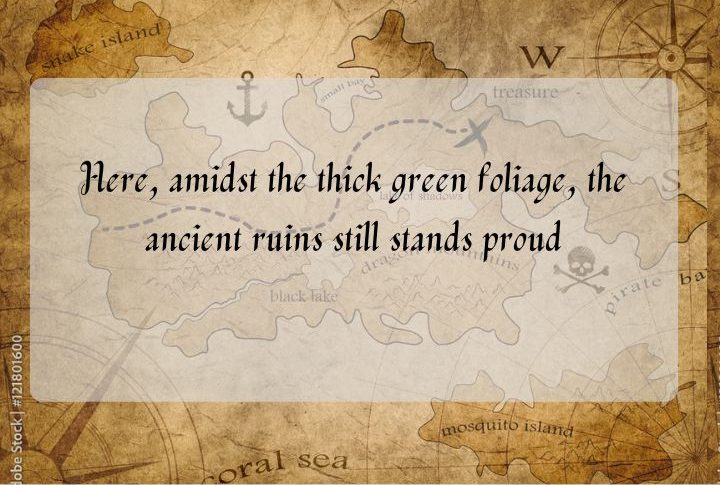 As the teams found this clue, they rushed towards the obvious thick green foliage in the university, the Kaju Kale where they found another clue after scavenging around for a while. 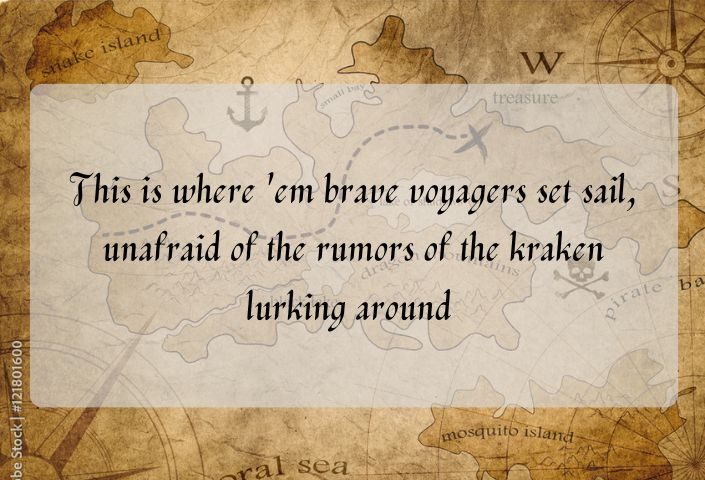 Yes, the boatyard. As our pirates reached this location, Game master Gv Lasitha was waiting eagerly to start a word game with them. As they sat on the boat, each team was given a paper with a word search by Gv Lasitha, from which they had to find ten words. When they completed the word search, they were given the next clue by Gv Lasitha. 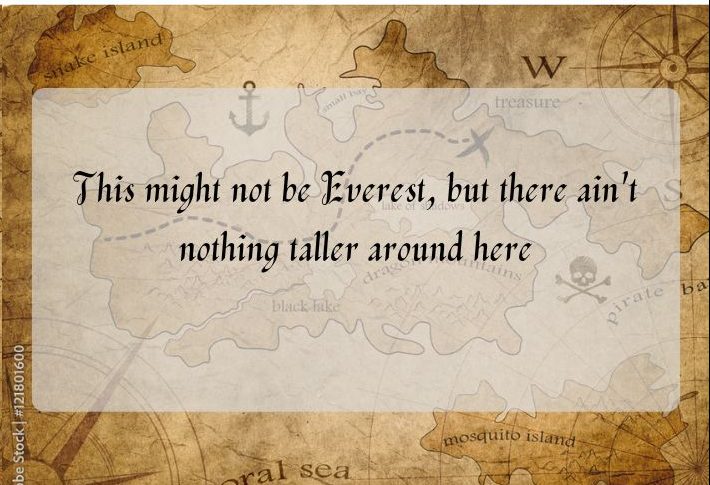 Did you know that the highest point in the university is the ENTC Rooftop?

Even though some teams were misguided at first when they found this piece of paper, this led them to the ENTC Rooftop. The view of the surroundings from here was a sight for the sore eyes of all the gaveliers who were visiting the location for the first time. 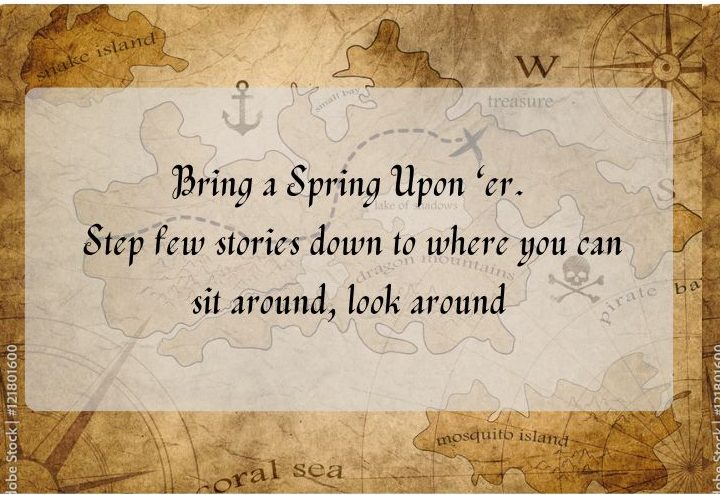 This clue was left on the ENTC rooftop which led them to the ENTC balcony downstairs where they found Game Master Gv Ameera waiting with bottles and water, ready to play a water passing game with each team. As each team quickly passed the water and filled the bottle, they were given the next clue by Gv Ameera. 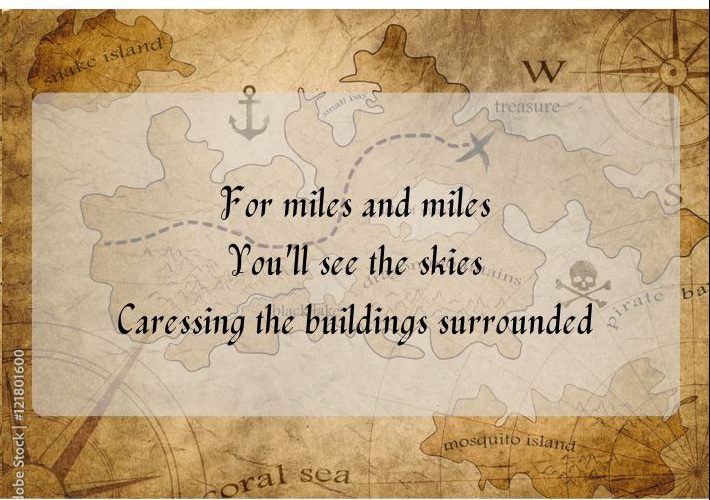 This led them towards the infamous Ahas Gawwa, where Game Master Gv Udula was waiting with a bunch of paper cups to play a game with the teams. Each team had to make a paper cup tower on the windy rooftop. As they succeeded, they were handed the next clue by Gv Udula. 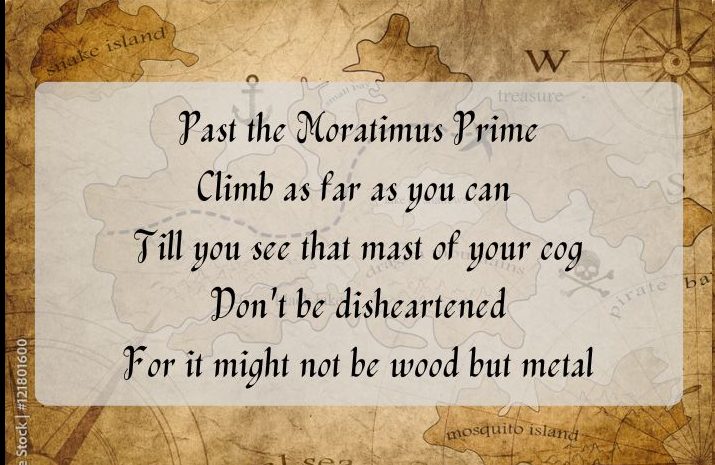 Optimus Prime at the University, Moratimus Prime is the steel figurine in front of the Mechanical Engineering building and this clue led them to the Mech Rooftop. Game Master Gv Chamath was waiting at the rooftop eagerly for each team to arrive to play a game of lighting a bunch of candles with a single matchstick. Despite the obstacles of the wild wind, each team managed to overcome the challenge and earn the next clue. 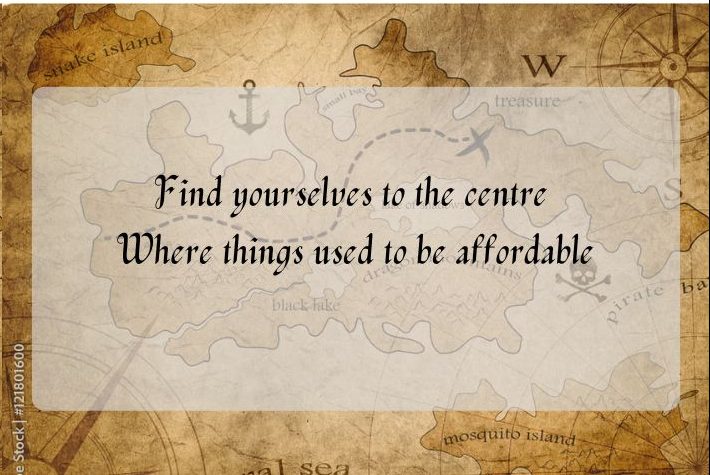 This is the final clue that everyone got which led them to the place where the treasure was hidden; where things used to be affordable: Roots, the fresh juices and smoothies bar at the university.

With each clue they found, gaveliers were running around the university with sweat dripping down their faces, still brimming with excitement. Some teams even used vehicles to go around collecting clues and some even ran across the Kaju Kale. After over an hour of finding clues, running, and playing games, the team consisting of Gv Thinithi, Gv Odil, Gv Saritha, Gv Harith and Gv Mihiran managed to grab the treasure which was hidden in the freezer of Roots.

Congratulations to the winning team for finding the 2 Liter tub of chocolate ice cream! 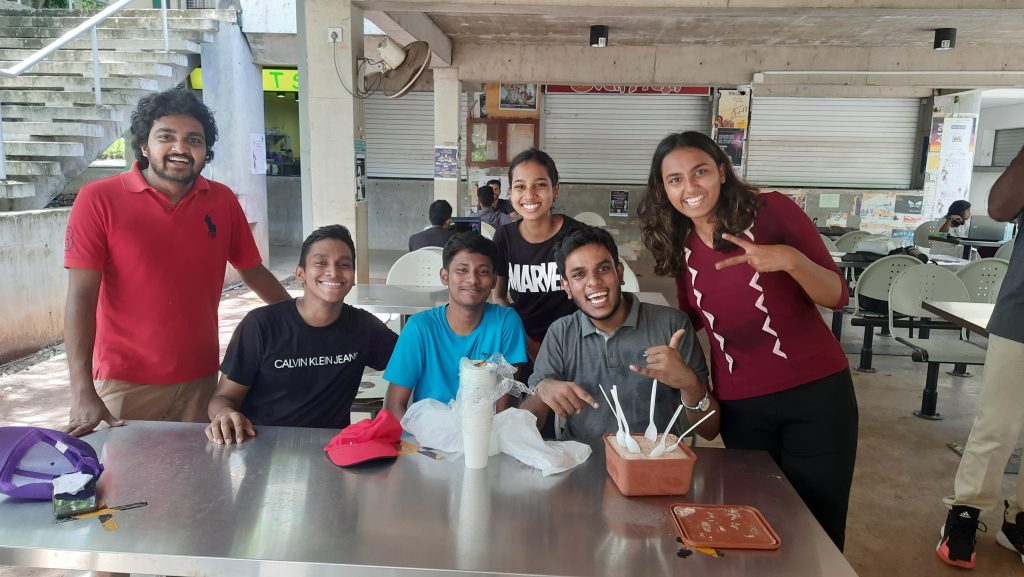 Once the treasure was found, all the teams gathered back at the Sentra Court where they shared the ice cream and their experiences of running around looking for clues. Unknowingly, everyone had gained a much more valuable treasure than the one they had been searching for; beautiful memories with the Gavel family that will be cherished by them forever.

With that, the fun-filled treasure hunt came to an end and I handed back the meeting controls to Captain Udesh Dangalla. Everyone agreed with him that the treasure hunt was indeed an unforgettable experience and he handed over the controls back to President Suthira Wijewardena, who ended the joyful morning on a happy note.

Thus, the 489th Educational Meeting and Treasure Hunt came to an end, telling us again that not all treasure’s silver or gold or ice cream tubs. Some even come in the form of a memory to cherish: a moment spent with the Gavel family, sharing love, laughter and joy. 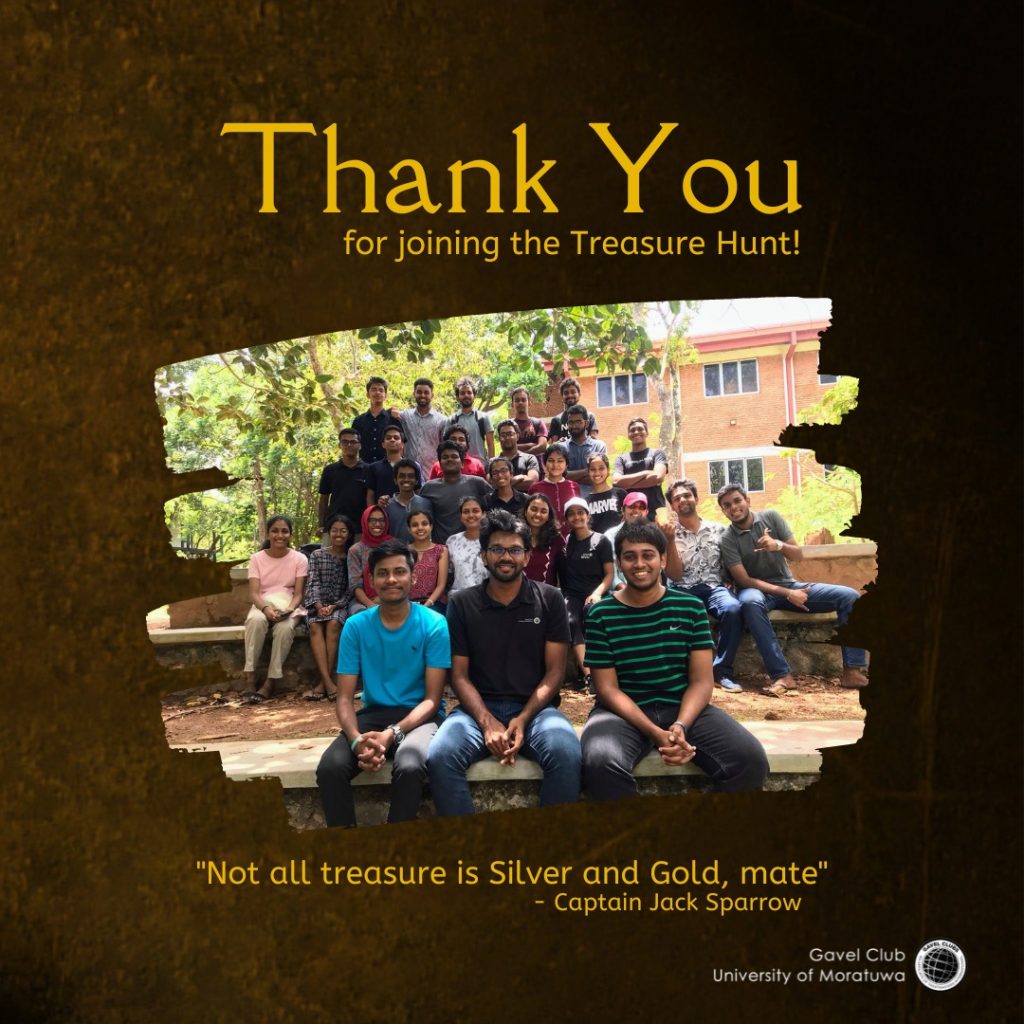