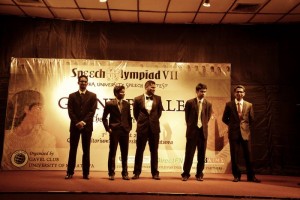 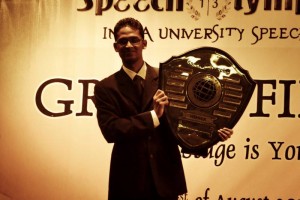 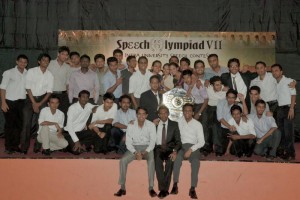 The Gavel Club of University of Moratuwa, an affiliate of Toastmasters International, commenced the 7th volume of its flagship event, Speech Olympiad VII for the Imperial College Challenge Shield, on July 2013.Under the guidance of the senior members of the Gavel Club, the two project chairs Akalanka Samarasena and Damith Senanayaka, worked in dedication to make this event a grand success.

The preliminaries were held on 2nd of July 2013, and 38 contestants from all three faculties participated in this round. From those 38, 12 talented speakers were selected for the semi finals. The selected semi finalists were, Mohamed Yasir, Nirmala Liyanaarachchi, Vibhanu Arachchige, Jayani Sudasinghe, Sachinthana Pathirana, Sajith Rajapaksha, Hasindu Siyambalape, Dinesh Kenady, Ahamed Saleem, Rafidh Rifaadh, Sankha Dissanayake and Sachille Atapattu. However, Sachille Atapattu was unable to participate in the semi finals, and the reserved semi-finalist Akshika Wijesundara got the opportunity to take part in semi finals.

Semi finals were held on 16th July, and from among the twelve semifinalists, five outstanding speakers ventured into the Grand-Finale, and contended to be crowned as the best public speaker of the university of Moratuwa, and for the Imperial College Challenge Shield for Speech Olympiad VII. The five finalists were Hasindu Siyambalape from Department of Chemical and Process Engineering, Mohamed Yasir from Department of Civil Engineering, Rafidh Rifaadh from Faculty of Architecture, Akshika Wijesundara from Department of Computer Science and Engineering and Dinesh Kenady from Department of Transport and Logistic Management.

The grand finale, which was held on the 1st of August 2013, in the Auditorium of the Department of Civil Engineering of University of Moratuwa, was graced by the presence of the Deputy Vice Chancellor of University of Moratuwa, Professor Rahula Attalage, who admired the efforts of the students who were tirelessly involved in the process of organizing such a spectacle to such great effect. Mastering the ceremony and chairing the contest was done by the Vice President-Education of the Gavel Club of University of Moratuwa, Hasini Abeywickrama. The panel of judges comprising of Distinguished Toastmasters was spearheaded by none other than the Club Counselor, Distinguished Toastmaster Zameen M. Saleem.

After thorough and difficult evaluation of the equally competitive prepared speeches by the five finalists, they were required to make an impromptu speech of 1 to 2 ½ minutes on the topic “A thousand-mile journey begins with one step”. And after the conclusion of both rounds, the panel of judges announced their results. Mohamed Yasir was selected as the second runner up, and Hasindu Siyambalape became the first runner up. The person who was crowned as the champion of Speech Olympiad VII and whose name was etched on Speech Olympiad shield, was Rafidh Rifaadh from Faculty of Architecture.