The origin of Halloween is dated back to the ancient Celtic festival of Samhain in Ireland. Since they celebrated the New Year on November 1st, the last day of the last year October 31st was celebrated by them as Halloween. When the time changes from last year to New Year, their summer ends and dark winter begins. They believed that the dark, cold winter is connected with human deaths and that’s the reason for destroying the cultivated crops after October 31st. Therefore there was the opinion that October 31st  is celebrated as it connects both years to stimulate the connection between the living souls and all the dead souls which would return on earth. With time, this liturgy to celebrate Halloween was then unfurled all around the world as a festival on October 31st in each year. It is rather a party with applicable Halloween costumes, distinctive fun games and spooky eats. 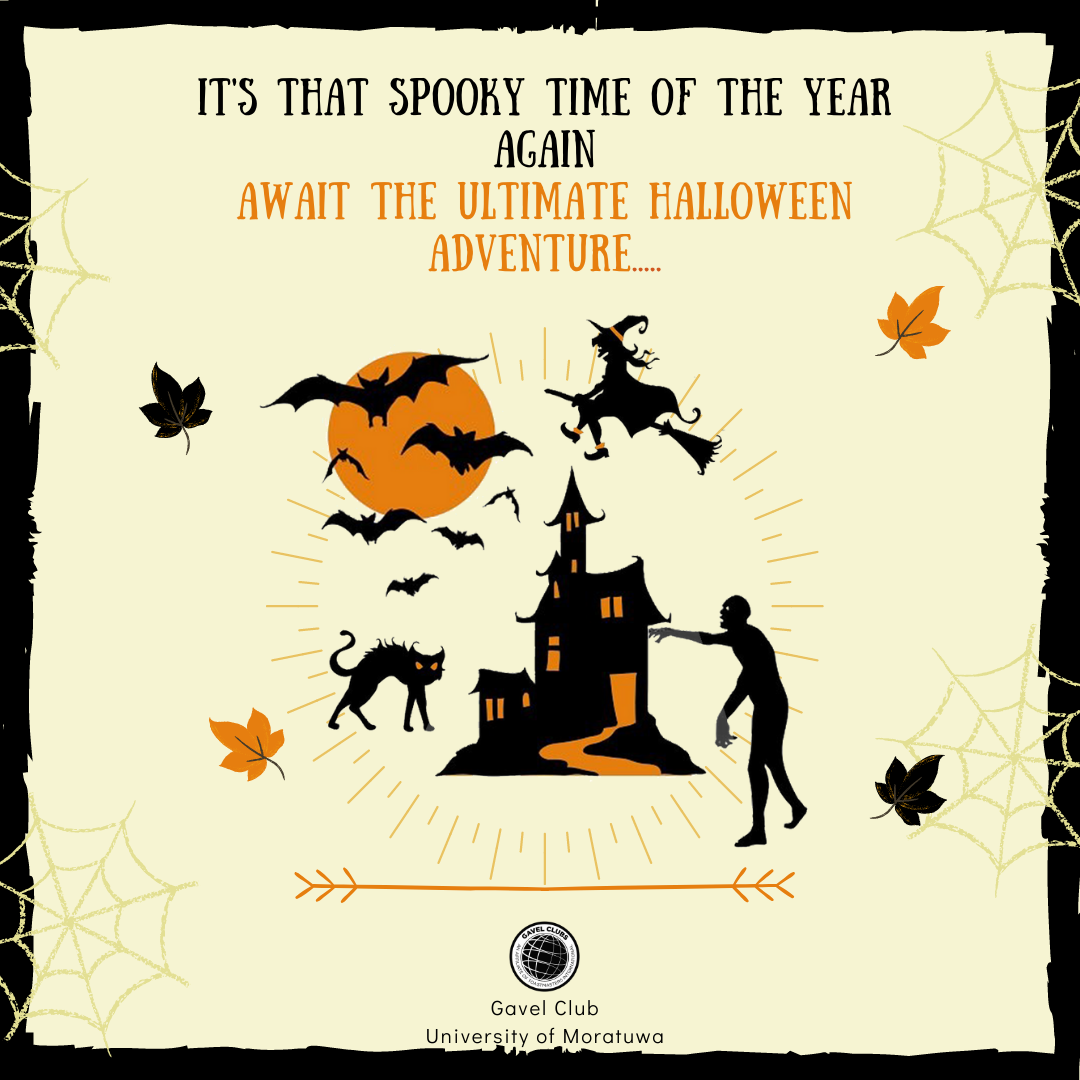 In each Year the Halloween celebration of Gavel Club of University of Moratuwa has the potential to be epic with lots of spooky events and fun games. Though things have changed this year, our love for Halloween hasn’t changed. Owing to the issue of Corona pandemic, as Gaveliers we brainstormed creative Halloween ideas to safely celebrate Halloween 2020. We immaculately arranged a fascinating virtual Halloween party to spread spooky feelings on full moon Halloween day 31st October 2020 via zoom platform. 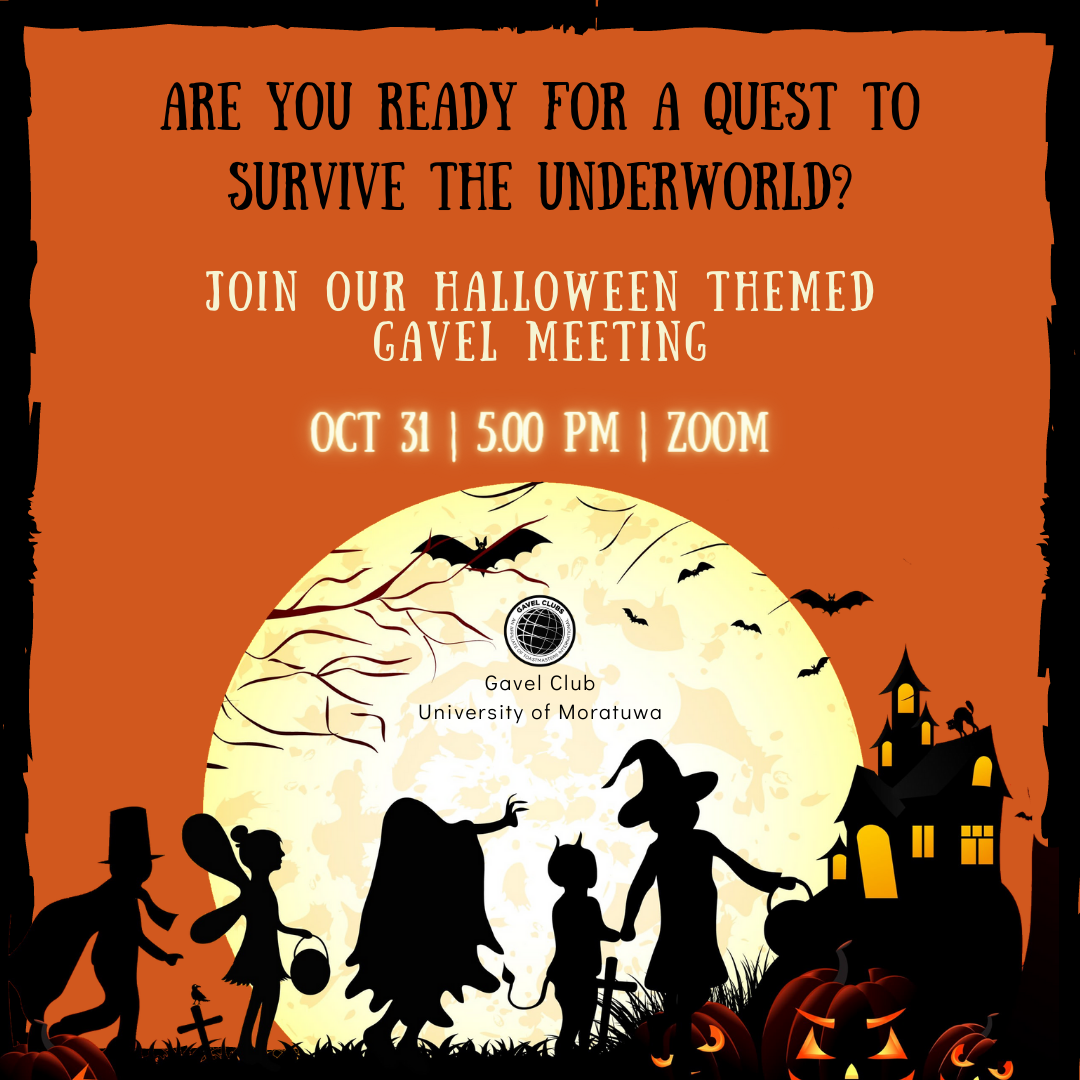 Earliest, the event was planned over a week, by the organizing committee through virtual meetings and the WhatsApp group created. Then all the fun games and the necessary concepts were organised. There was a countdown to attract the members towards Halloween celebrations of Gaveliers. 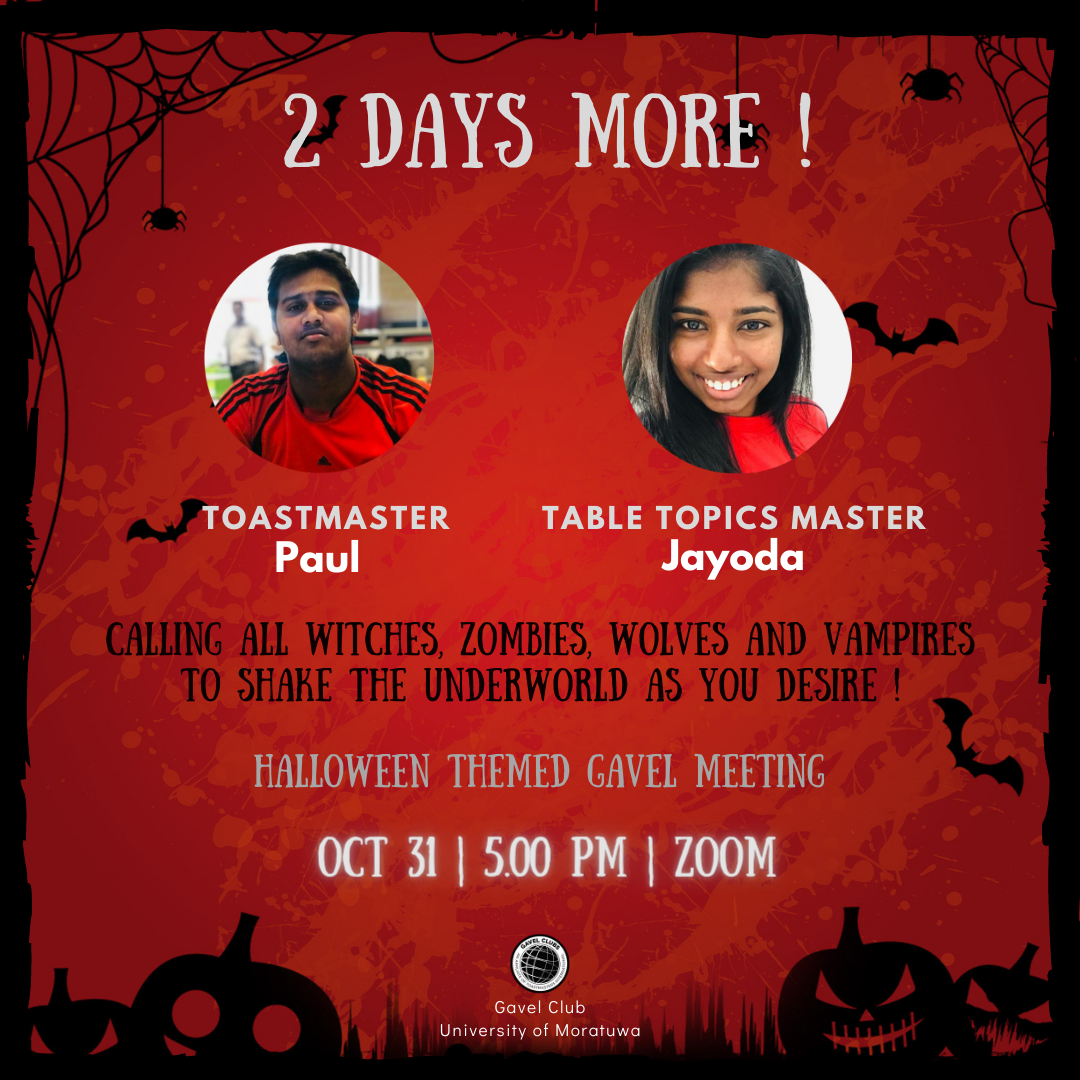 After a lot of hard work, the impressive spooky day began on 31st of October, the full moon Saturday. In addition to that, the day was followed by spooky fun games plus unprecedented events with the fright and delight of Halloween strong as ever. All the Gaveliers were dressed in spooky costumes, and some were dressed like spooky Halloween characters.

The president of the club, Amaya Dharmasiri who was dressed spookily indeed, commenced the meeting by welcoming all the members by greeting the witches, vampires, zombies and all the spirits to an evening filled with scares, fear and scream. The round-robin session was more interesting since Amaya invited to take a pen and piece of paper before all. The first clue out of the three was given by the Mummy, Chamuditha to find the one who has stolen his coffin. It was followed by the toastmaster Shehan Paul (Dressed as Lucifer, the devil himself) by greeting all the blood-sucking zombies to his kingdom. The role players were introduced. In addition to that, three wicked witches introduced the path to earning points on spooky costumes, table topics and scary fun games.

The round-robin session began. According to the opinion of the organizing committee, the members were invited to draw a monster with the given shapes and demonstrate it in the round robbing session. Each Gavelier introduced their drawn monster and the reason for designing such a monster. The Gaveliers were given the names of the clans by dividing them into four clans and they renamed their selves according to the clan. Amaya Dharmasiri (Casper) started the session by showing her monster which is 2020. She stated that 2020 is the scariest thing than any other ghosts or demons. Chathumi’s monster was a human and she claimed that since a human has a choice, sometimes they transform themselves into monsters who are terrible than all the vampires and demons. It was followed by all the Gaveliers in a mesmerized and spooky manner. The round robbing session was followed by the second clue by the mummy to investigate the one who has stolen the coffin. 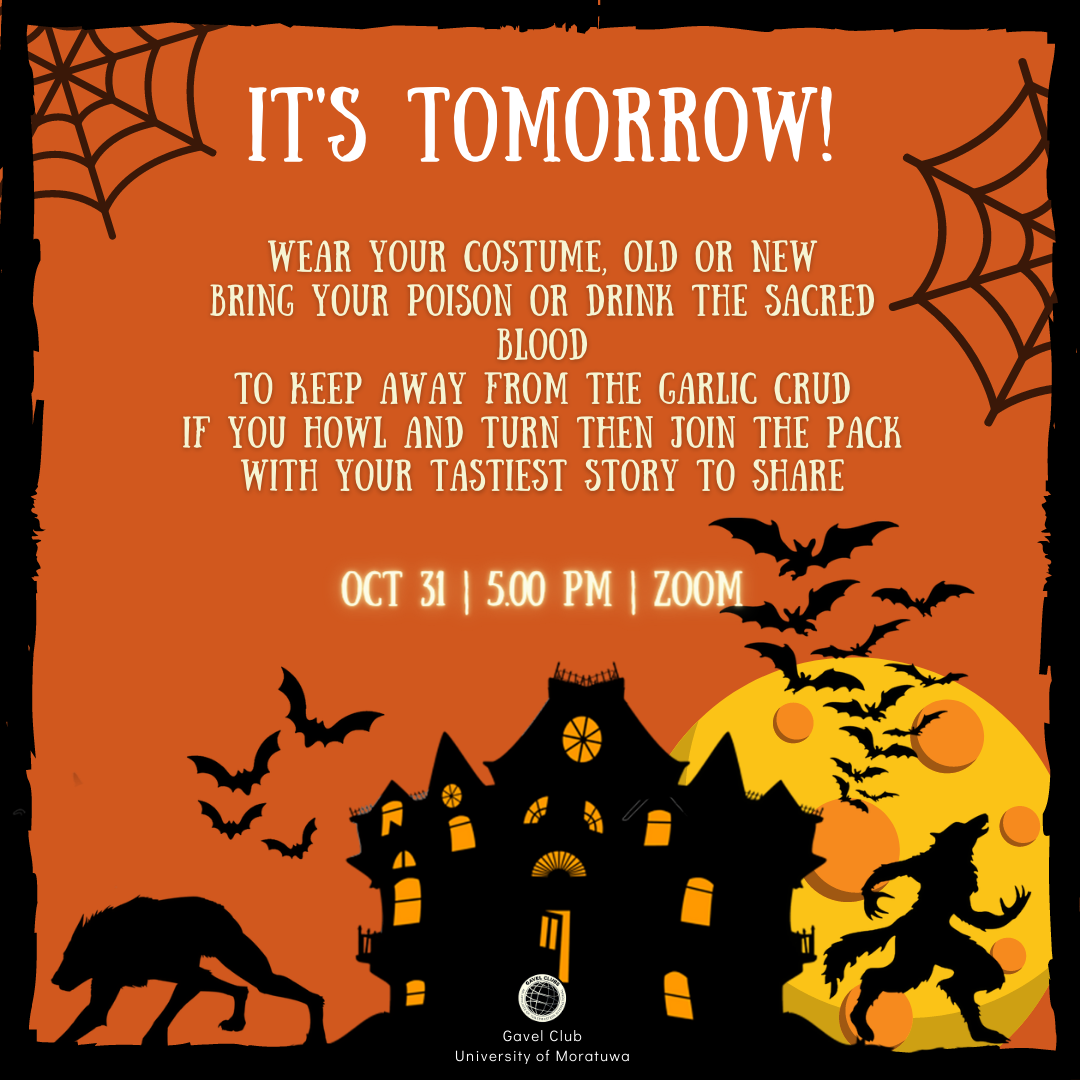 Then the table topic session was conducted by the Table Topics Master, Dark Fairy, Jayoda Dissanayake after categorizing all the Gaveliers to four clans and renaming. Extra points were allocated for surprise topics and  for using the word of the day. The session was commenced by Frankenstein, Akila and the surprise topic was taken surprising all the zombies in the session. He expressed well that the heart is not only pumping blood and full of love, care and affection under the surprise topic “Would you rather eat a brain or a heart?” It was followed by ‘you know who’, Dinidu’s surprise topic “A psychic is here to tell you when and how you die”. Furthermore, he uttered that people will not choose to know when and how to die. Chathumi, Harley queen declared the fabrication behind the “Thirteen, black cats and broken mirrors” by sharing her experience on speech Olympiad. Most of the Gaveliers brought their topics together with the scary world and made the Halloween day full of hair raising emotions. After terminating the session, the role players presented their reports and it was followed by the third clue of Mummy. 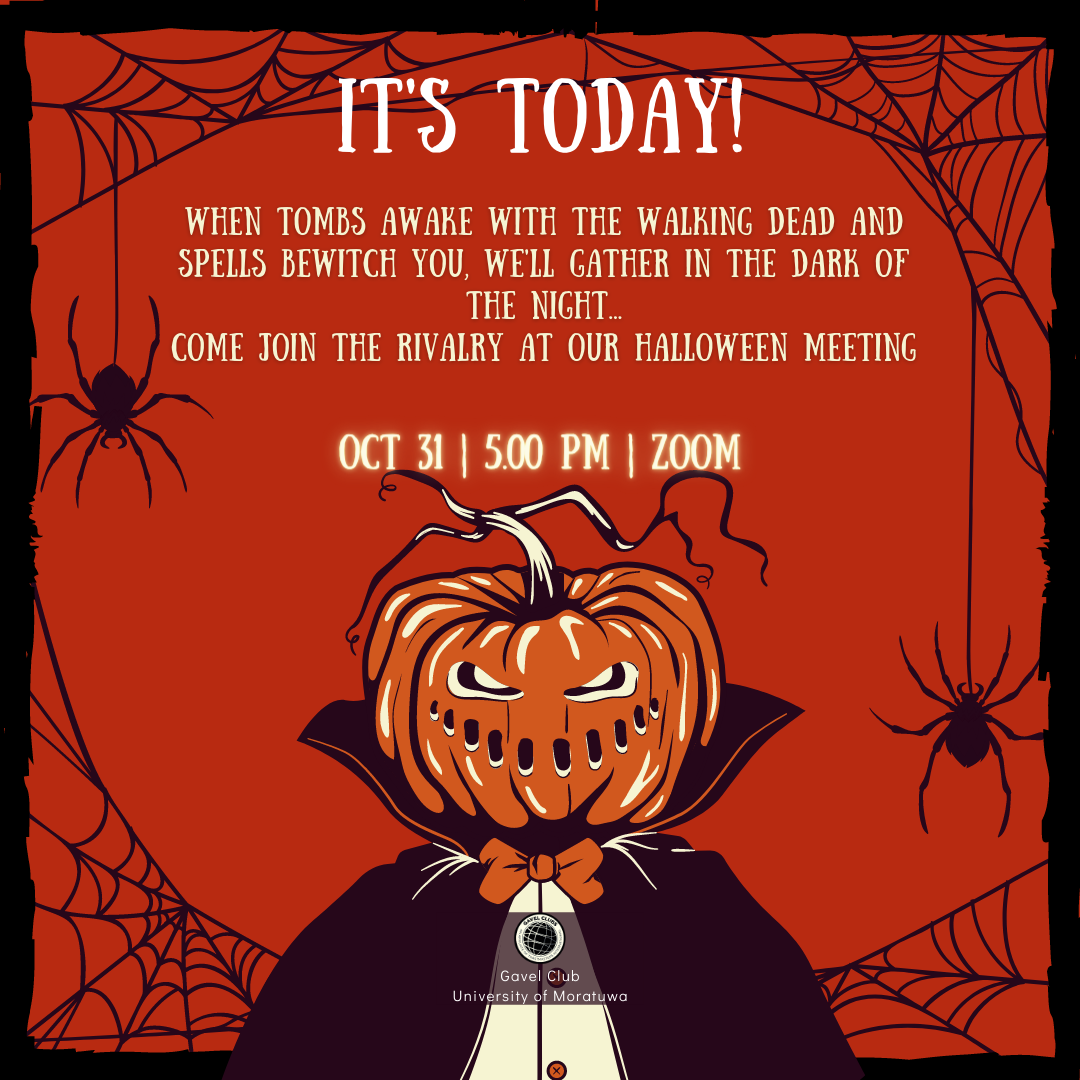 All members were divided into four break-out rooms according to their clans given and the games began. The four clans were Witches, Vampires, Werewolves and Zombies. The control was handed over to each conductor of the breakup rooms. Cryptic snapshot which they had to guess the picture while it is zoomed in was something really fun. The clans had to elect a group leader and the answers were confirmed by the leader. Then the scary crosswords, bewitching puzzle was commenced. It was mesmerizing and all the members were busy guessing the correct crosswords. Following that the game Haunted stage kicked off. The name of the movie must be speculated by looking at the given picture. Furthermore, the game was filled with spine chilling feelings since the background music was blood-curdling. All the marks were updated in the excel sheets after terminating the breakup rooms.

Then the Grammarian’s report and the general evaluator’s report were declared. The answer of the riddle was announced by the Mummy, Chamuditha. The Lucifer, Paul and Akila announced the winners with lots of spooky noises and screams. The winning clan was the scariest, ‘Werewolves’ and they were cheered with scary barks, growls, moans, snarls, whimpers, whines and yelps. The day was a fusion of fun and free space to improve public speaking. Halloween helped the bonds among Gaveliers to become stronger. By wishing joy to the winning clan Shehan Paul gave the control to the president Amaya by thanking his beloved crew who made the torcher a battle and an amazing one.

The president of the Gavel Club of University of Moratuwa thanked all the participants for dressing up with scary costumes and for joining the fun games. The organizers and the role players: Paul, Jayoda, Deena, Anjalica, Anuki, Chamuditha, Shimzara, Lakshan, Akila, and Charithma were highly appreciated for fabricating the day a triumph. Special thank was given to Sanjitha who fascinatingly created all the scary flyers. Then a virtual group photo was taken by the president by inviting the participants to switch on the videos and the Halloween meeting was concluded. 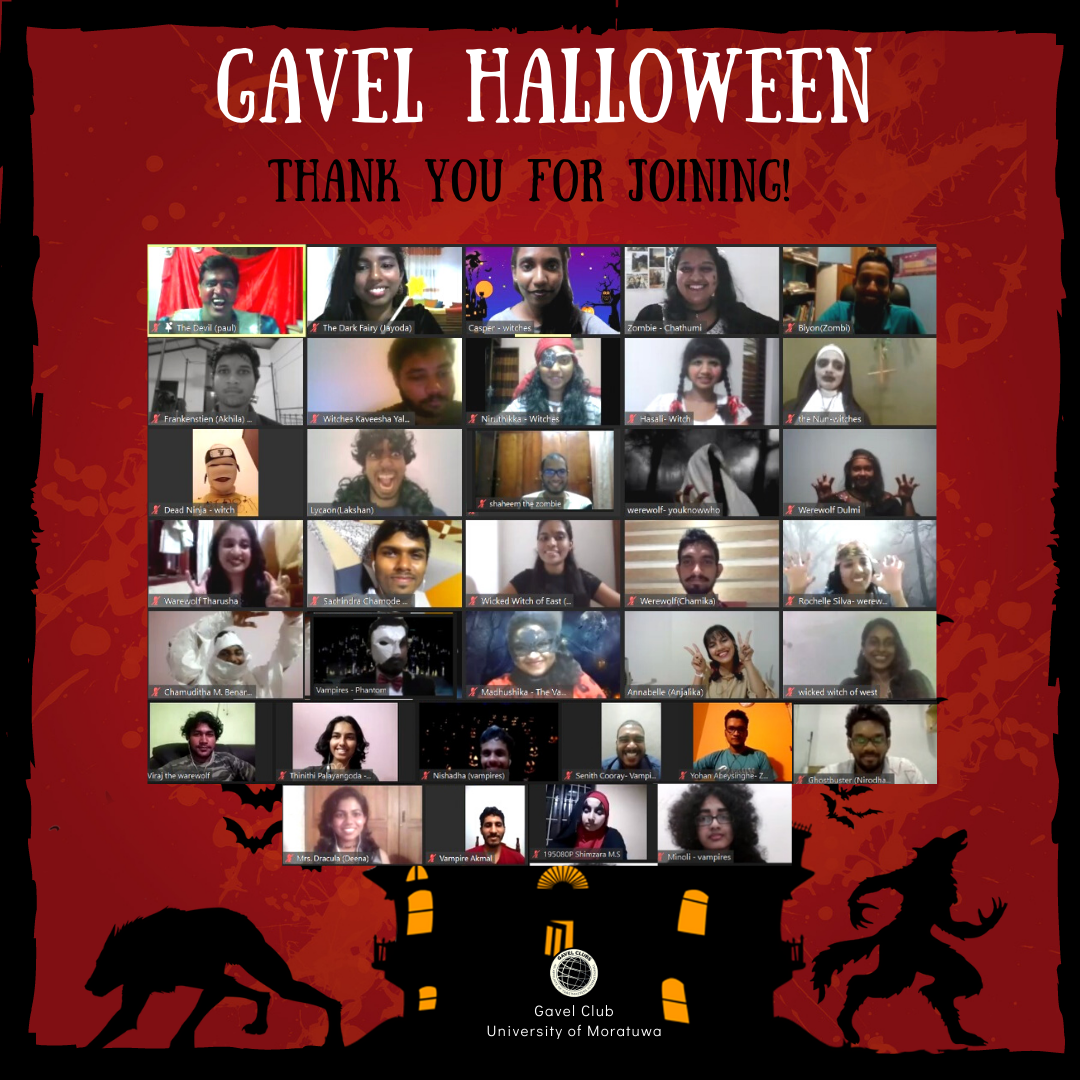