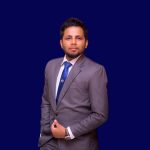 The Story of Mohamed Yasir, Champion of Speech Olympiad VIII

Walking the journey through the shadows of my past, during my school days, just like most students, I was always reluctant to opt in speech contests. Perturbed by the fear of failure and embarrassment, I never wanted to perform before an audience. I remember being forced to do a speech in grade 11 at the assembly which surprisingly turned out well. That was when I realized that I had a potential towards public speaking. Thus, I started my public speaking journey. Following this, I grabbed a few chances to compete at school functions and gradually established myself as a decent public speaker.

I geared my public speaking drive during the twilight of my school career, but I did not have many opportunities to explore. Right from the moment I joined university, I told the inner me that I am going to try as many extracurricular activities as possible. Taking part in a speech contest was the ultimate challenge since delivering a speech under pressure was a monumental task. The very minute I stepped into my university life, I eagerly joined Speech Olympiad, embarking on a quest to expand my comfort zone.

I was excited for my very first experience at Speech Olympiad which was also the first speech contest I took part in. I was, however, under-prepared with a very short speech lasting merely 2 minutes, not to mention getting tongue-tied somewhere mid-speech as well.

Leaving the hall, I realized that I needed help from someone who was experienced and proficient in public speaking, which was my driving intention to join the Gavel Club.

The following year was all about learning the basics of public speaking, getting the exposure and being mentored by senior Gaveliers. With their guidance, I came up with a solid speech for the following Speech Olympiad, and with a huge effort put in from my end, I emerged as the first runner-up.

Motivated by the success of that year’s competition, I wanted to compete in the upcoming competition as well. But along with being a past winner and the experience gained through Gavel, I became overconfident in myself and my abilities. I prioritized other commitments over Speech Olympiad practices and mentoring sessions with the belief that I would be able to manage on my own. It was only after emerging second runner-up that year, I realized the fault in my approach.

The final Speech Olympiad during my undergraduate life was the last shot at giving my best. I went back to square one and started my journey once again. This time, I reinforced myself with past Gavel experiences along with the understanding that I will always be able to improve with others’ help.

Similar to my second Speech Olympiad experience, I worked hard, carefully focusing on the specifics such as time management and coming up with the best approach for table topics while sharpening my speaking skills and refining my speech with the help of practice and impactful mentoring sessions; which finally made me the Champion of Speech Olympiad VIII in 2014.

The surreal moment when I emerged as the champion is something I will cherish forever! I will never forget the warm big proud smiles my parents, friends and my Gavel family were projecting at me from the audience. Engulfing the feelings of this successful achievement was the appreciation I had towards my mentors who guided me to this achievement; some of whom had even gone beyond their university life but still showed up to support me and all my fellow Gaveliers.

Unfortunately, till then I did not have a long-sighted personality that focused on developing leadership qualities, rather I was only improving my public speaking skills through the Gavel Club. On that day, I promised myself to become a better team player and that was the vibrant rainbow that coloured the path for me to become a Toastmaster. Currently working as the Assistant Division Director of Toastmaster District 82 – Division F, I am very proud to say that I have taken what I learnt from Gavel, through to Toastmasters, not only in becoming a sound Toastmaster, but perhaps in nurturing myself as an encouraging mentor as well.

I believe that regardless of where you stand, if you are passionate about something, it is important to expose and challenge yourself to grow as an individual. Speech Olympiad taught me that compering and delivering a speech are not the same thing, especially when it comes to a contest where the delivery is done under a lot of pressure. Some core lessons I learnt were that commitment, along with self-evaluation, learning from others and being humble, goes a long way. Reflecting on my voyage of public speaking, the moral is to remind oneself to never shy away from opportunities. It is not necessarily about winning or losing, but the experience and exposure you gain by pushing your limits to become better at what you do and the way you define yourself.

Being a champion does not only mean that you will be celebrating, but rather exploring the deep end and investing in yourself more. Grow up to every dawn of sunrise and bloom wherever life plants you, for enjoying what you do matters the most. I cherish the journey, not the end result.