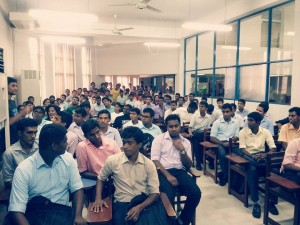 The Gavel club was in for a pleasant surprise this week.

It wasn’t the Gavel Orientation Program for the freshers.

And no special advertising was done for this particular meeting.

We were planning an orientation program for the freshers in a coming week.

The ENTC PG seminar room was brimming with enthusiastic faces of new brothers and sisters on 7th January 2016 as the 269th Gavel meeting kicked off.

The President, Vibhanu Arachchige, initiated the meeting with a question:  “Your heart starts beating before you are born. It stops at two situations in life. Can you guess what they are?”

“While death is one situation, the other situation is when we are about to deliver a speech”, he proceeded to explain amidst the acknowledging nods and smiles of the listeners. “But here at Gavel, we turn that fear into passion. Gavel is not only a place where people win All Island Best Speaker titles or represent the country for CIMA GBC global finals. You become part of a community that will take care of you, a group of people who will spend hours to help you improve. You become part of a family.”

Then the control was handed over to the Toastmaster of the day, the vivacious and talented Piyumi Bandaranayake, one of the members of the CIMA GBC 2015 team which represented Sri Lanka in Poland. For the round robin session, she asked a question that let us run wild with our imagination: “Which super power would you like to have?”

“I’d rather have a Benten watch because I can be Flash AND fly”, were some of the excited responses that followed.

After listening to more super powers including the ability to read others minds, get rid of all diseases, be invisible and change body shape; the Toastmaster concluded the session by saying that the world would be in utter chaos if our wishes did come true.

The Table Topics Master of the day was none other than Kaushalya Gayan Batawala, the champion of Speechmaster 2014 and Inter University Best Speaker 2015. With his charismatic style, he introduced the topics of the day.

“Strength is measured in pounds, speed is measured in seconds. Courage… You can’t measure courage”, Vibhanu Arachchige spoke about how he found his courage, his special friends and his second family through the Gavel Club. Next up was Hasindu Siyambalape, another Gavel legend. He dramatically spoke about his first day at the university and how Gavel club helped him to ace a job interview. “I was ready to respond quickly to the interviewer’s questions because I’ve faced many Round Robin sessions; the first question to introduce myself was easy because I had done a 7-minute speech at Gavel as my icebreaker”

The first fresher to break the ice was Kithmin. “Courage is what it takes to stand up and speak; courage is also what it takes to sit down and listen”, quoting Winston Churchill effortlessly, he went on to say that he marveled at speakers like Kaushalya since five years back. Determined to conquer his fear, he had joined debating and found his voice. Through his experiences, he encouraged the listeners to come up and speak.

Asitha enthralled the audience by speaking on the topic “Happy new year?” “How can we celebrate when so many people are being killed? How can we kill our own kind? Can we really celebrate?” he urged the listeners to think. Kasun shared an informative description of “Star Wars”. It was Kanchana who painted a vivid image of his first day at the university in the minds of all present. He evoked laughter as he explained how he turned up at the campus super early and dithered at the gate wondering whether to go in or not.

Jazz voiced his opinions on the future of Sri Lankan cricket and his own childhood dream to be a cricketer. Then Bathiya delivered a heartfelt speech declaring that his first day at Gavel, the Christmas meeting, was one of his best experiences at the university. He didn’t forget to appreciate the Gaveliers for warmly welcoming him to the family. Thilina’s speech about “The force awakens” and Praveen’s entertaining analogy between finding time to watch Sherlock Holmes and finding time for Gavel despite exams added more value to the evening. Sajeer’s speech was an eye-opener as it made us question whether our efforts were enough to reach the global arena.

The end of the meeting wasn’t really an end- for it was the beginning of a new era for Gavel; the era of fresh and enthusiastic brothers and sisters from batch ’15.

Word of the day: Abominable