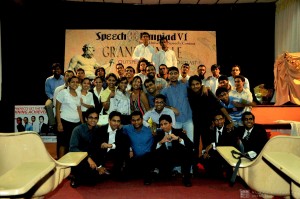 Speech Olympiad organised by the Gavel club of the University of Moratuwa, an affiliate of Toastmasters International, recommenced for its 6th edition with the Preliminary round on the 10th January 2012. The mammoth project was chaired by Gaveliers Pasan Pethiyagode and Hasini Abeywickrama.
This event which is at the apex of the most anticipated events in the university calendar attracts participants from all three faculties of the university, who battle it out to get their name etched in the glorious Speech Olympiad Challenge Shield.
Speech Olympiad is organized with the sole intention of enhancing the English language communication skills and leadership skills among the undergraduates. It also uncovers the hidden talents of the budding young public speakers, encourages them to polish their skills and to strive towards success. This event has proved to serve its purpose well, as many winners and finalists of ‘Inter University Speech Contest’ and ‘All Island Best Speaker Contest’ have been proud discoveries of past Speech Olympiad contests. 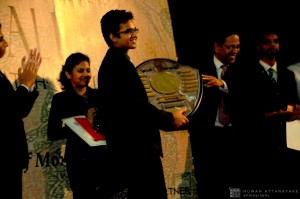 Out of the 32 undergraduates who presented their 5-7 minute prepared speeches at the Preliminary round, the best 12 speakers were selected for the semi finals. There they were given the challenge of making a 1-2 ½ minute impromptu speech in addition to the 5-7 minute prepared speech.
After a thorough evaluation of both the impromptu and the prepared speeches, university’s best five public speakers were selected for the Grand Finale, by a panel of eminent judges who were actively engaged in the Toastmasters movement.
The five finalists; Himeshi de Silva of Computer Science and Engineering, Sirimevan Jayasundera of ’11 Batch-faculty of Engineering, Dinesh Kenady of Transport and Logistics Management, Thiran Sellahewa of Mechanical Engineering, Mohamed Yasir of Civil Engineering, showcased their public speaking skills at the Grand Finale on the 22nd of February at the Civil Engineering Auditorium of the University of Moratuwa, in front of the dignitaries of the university, fellow undergraduates and the distinguished panel of judges comprised of renowned Toastmasters. 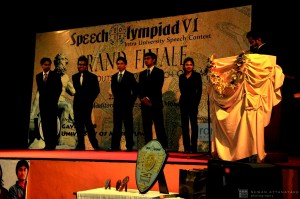