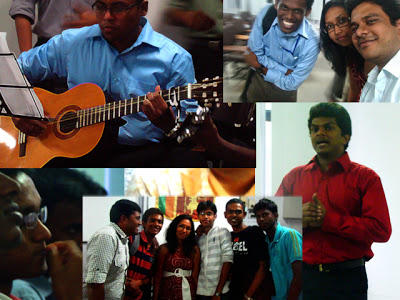 134th Gavel meeting was held at 5 p.m onwards on 22nd of December at CSLR- Department of CSE. Gavel never let any special day in the year calendar to go without celebrating.  This was one such day. The Gavel Christmas Meeting.
Role Players for the meeting were as follows:
Toast Master – Nirmal Silva
Topic Master – Santa (Charith Akalanka)
Timer- Niles Perera
Ah counter- Samawath Mallawaarachchi
Grammarian- Romesh Malinga Perera
CL Evaluator- Rajasooriyar Canagasooriyar
Table Topic Evaluator I- Erangi De costa
Table Topic Evaluator II- Channa Gunasekara
Prepared Speech Evaluator – Eshan Perera
Even the invitation for the meeting was different. Members were asked to come on a dress code red and white. The room was filled with junior, senior and former members. The meeting was called to order by the president, Niles Perera. Then the special toastmaster for the day was introduced, Nirmal Silva. Who have took tremendous effort to find a red shirt. And he emerged from the rest due to his dress. He conducted the round robin session on the topic “What is the thought we should get into our hearts in this Christmas season?”  . Different views were popped up where Hasitha decorated the session by stunning vocals.
Then time was to table topic session. Giving a surprise to everyone Santa had come all way to our meeting to conduct the table topic session with bunch of chocolates. Every speaker was given a chocolate. So no special evidence is needed to say that audience was really persuaded to come to the stage. No one in the audience would forget that session forever because it was that much interesting. Erangi and Channa gave very descriptive evaluations to the speakers. Next came prepared speech session.
Sashini Hapuarchchi broke her ice in a fantastic way. According to the evaluator, Eshan it was at first 3 ice breakers of the club.
This meeting became more special because of the impressive carols presented by a group of Catholic Society fellows.   They were truly amazing and added a real value to the occasion. After the meeting was adjourned by the president audience was offered a delicious treatment.