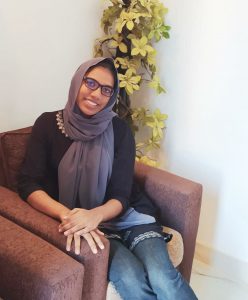 “It was love at first sight, at last sight, and at ever and ever sight.” – Vladimir Nabokov

Every gavelier has undoubtedly experienced a mystical attraction towards gavel ever since their very first gavel meeting. Thus, the first educational meeting themed “Valentine’s day”, was held on the 14th of February 2021. It was the first meeting after the appointment of the new board members. Set in a virtual environment due to the pandemic situation, the meeting had the participation of a large and diverse audience: those who were passionately in love, the hopeless romantics, those curious about love, the romance cynics, and those with nothing on their agenda on the evening of Valentine’s day. 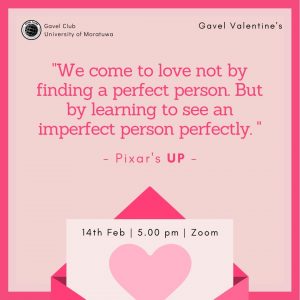 To everyone’s amusement, Dinidu started to read a matrimonial advertisement from the daily newspaper, which turned out to be an interesting way of introducing the toastmaster of the day, Hasali Perera. The control of the meeting was handed over to Hasali, who introduced the other role players of the day in the same matrimonial advertisement style. The table-topics master was Achintha, the timer was Dulmi and the Ah-counter was Suthira. The Grammarian was Muditha, and the word of the day was ‘Affinity’. 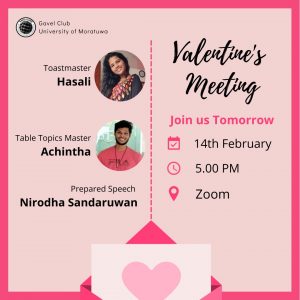 Since love itself is a spontaneous affair, the round robin session had an interesting twist to it. There were 6 topics on a wheel, which was spun at each speaker’s turn. The speaker had to speak for 20seconds on the topic at which the spinner stops.

The interesting topics were as follows:

There were many interesting stories about embarrassing first crushes, heartbreaks, strange soulmate requirements, and even a description about a literal date fruit. The Zoom chat room was very active with funny remarks and heated discussions.

It was then time for the table-topics session. As is his norm, Akhila went first, picking a surprise topic. His topic was ‘Blood is thicker than water’ and he highlighted the value of our loved ones.Then we had Madhushika raising some skeptical questions about love at first sight and its incredulity. She spoke on how movies set unrealistic ideals of love which can lead to disappointments.

Anuki chose to explore a Sherlock Holmes quote (“Love is a chemical defect found in the losing side”), by telling us stories about how sentiment can be both a blessing and a curse.Viraj explored the different types of relationships we have with people in explaining what love really is.Nirodha had a perspective contradictory to Madhushika and justified the unrealistic expectations of love in movies, proving that gavel is a place of diverse opinions and creative minds speaking their hearts out.

Lakshan’s philosophical approach broke down all the fancy layers humans use to cover up the primitive breeding instinct called love.Then we had Jayoda speaking on what is perhaps the most important form of love of all, Self-love.Methmi recalled her first gavel meeting which was the 2020 Valentine’s themed meeting and commemorated the 1st year anniversary of her relationship with gavel.

Chathuni was a newcomer at gavel who spoke passionately on a tragic Korean drama that disappointed her.Raveesha was also a newcomer, who plucked up the courage to tell us about starting a new Valentine’s day tradition where we share love with the less fortunate .Kajhanan highlighted a root aspect of love, which is sacrifice. He reminded us all to reassess our relationships and value the sacrifices embedded in them.

Next was a speech by another newbie, Nethmini, who also gave her perspective on what love really is while highlighting the importance of self-love.Then we had Rukshanth sharing the sentimental story of a past crush that didn’t work out.Thushara, started off speaking about 2 popular fictional characters, and ended off with a twist.

Our final speaker for the day was Tharindu, another enthusiastic newbie, who also spoke on the unrealistic ideals of love portrayed in movies.

The Ah-counter and timer gave their reports, and the table-topic evaluators, Madhushika and Akhila gave their evaluations on the speeches.

It was time for the prepared speech by Nirodha, titled “From a hair’s breadth.” Kasun Withana was the evaluator of this speech, and the other reports for the speech were also given by the respective role players.The Grammarian’s report was produced next, which was followed by the general evaluator’s report. The controls of the meeting were handed over to the president.

The participants turned on their videos and held up heart gestures with their hands to capture the happiness of a very memorable Valentine’s meeting. Since standing ovations don’t have the intended effect in a virtual environment, there were beautiful slides prepared to applaud the first-time speakers.

Be it smiles or tears, gavel will always hear your story. With over 15 speakers, and time running short, gavel still made time for the stories. Gavel is a sanctuary to us who seek some fun and relief after a long and hard week. It’s a place to share your thoughts and engage with people with different opinions and ideas. Thus, the 426th gavel meeting concluded, leaving everyone who attended in lifted spirits. 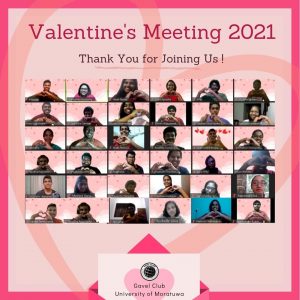