The feeling of Christmas air hit me earlier this year as I was appointed as a co-chair along with Gavelier Malintha for the last Gavel meeting of the year, the Christmas themed meeting. Under the prevailing conditions of the country, the meeting was to be held virtually. With the requests of our seniors ‘for a blast’, and ‘for cooler stuff and games’ to indeed end the year with a blast, we started racking our brains for various events and games. After suggesting games, backup games, topics to speak on, backup topics to speak on and all other suggestions with their relevant backups, we managed to convince our seniors to agree to a few of them.

The day for our meeting finally arrived. The 456th Christmas themed Gavel meeting started off in a very peculiar yet special manner. Before any of the introductions, soulful guitar music drifted through the air, enchanting us all with the familiar sounds of ‘Feliz Navidad’. It was none other than our very own Gavelier Thanujaya. With our president’s introductions and comments that Thanujaya’s was the best start to a meeting he has ever seen, the meeting controls were handed to me.

Thereafter it was the time to introduce our very special guest for the day who went through a lot of hassle to come to our meeting all the way from Arandelle. Our innocent, outgoing guest, who was reputed for being one of the friendliest snowmen ever, was none other than Olaf. Everyone was happy to meet our very cheery guest who stated that he loved warm hugs. And indeed we were looking forward to hugging him as well. With our discovery that it was Olaf’s first Christmas, we were determined to make sure he too knew what Christmas was all about.

‘Olaf, Christmas is about singing’

Then it was the time to stage Gavelier Inodee to mesmerize us with her singing. As Olaf said afterwards, when she sang ‘Last Christmas’ alongside her piano, her voice felt angelic indeed.

Thereafter the role players were introduced. With Olaf’s question whether Christmas was only about singing, we moved on to our round robin session to show him otherwise. 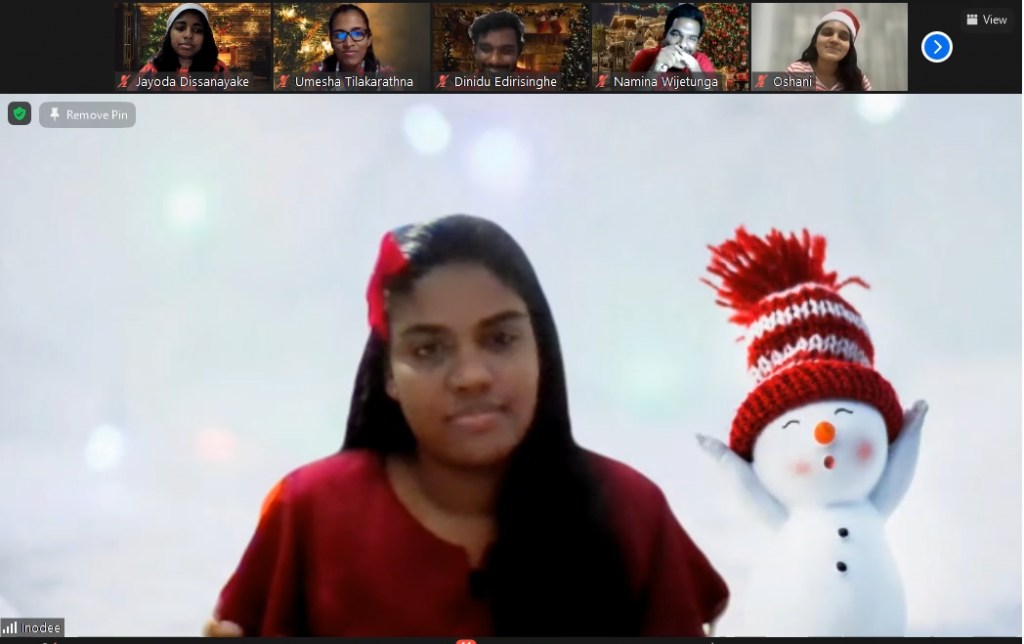 During the round robin session, everyone had to pick a number. Behind each numbered christmas stocking, was a question for them to answer. During the round robin session, our  Gaveliers got to invite their favorite Korean actors, their long-time-no-see best friends and even Santa Claus himself to their Christmas dinners! We also got to know the best gifts they have ever received including dogs, superglue and many other heart touching memorable gifts. When the Gaveliers were asked how they would sneak into houses if they were Santa Claus, answers included meticulously planned home invasions, traditional chimney sneaking and even knocking on the front door! When asked which Christmas movie they’d like to be stuck in, a Gavelier even said that he’d like to be in one about the nativity just to watch everything sitting in a corner! Other than that, they were asked a characteristic of anyone in the meeting that they adored, and all our Gaveliers had the same answer, that not one, but everyone in the Gavel family are adored as they are so kind and super supportive.

‘Olaf, Christmas is also about fun and games’

And it was the time for the games. Everyone was separated to four breakout rooms named as,

The first game was an online Kahoot quiz about Christmas in which there was a lot of laughing and arguing about what on Earth the answers were! Thereafter, it was time for the second game, charades. Here, the members were given phrases which were either names of famous christmas songs or names of christmas movies. They had to act it out so that the other members could guess it. The game masters and everyone else had loads of fun laughing, trying to act out ‘angels’, ‘carols’ and in one breakout room even ‘Hark the Herald’!

After the games were over, everyone returned to the main room with smiles on their faces. Thereafter we had another Christmas song from Gavelier Samitha, ‘Seethala sulaga hamai’  to which we were waving to the rhythm of his guitar and his voice in our own houses but yet together via Zoom.

Then it was time for the table topic session and the controls were handed over to the table topic master, Gavelier Malintha. The table topic session started off with our president Dinidu’s speech on how things can change a lot in a year. Afterwards Gavelier Thulani gave us a very heart touching speech asking us what the best gift we all have received, to which the answer was, our parents. Thereafter we had two Santas, one awesome, and the other rather evil, according to our Gaveliers. Amirthavarshani, our good Santa wished a lot of good things including all the single girls and boys good luck in romance. Gavelier Shanaka, the comparatively strict Santa, had new amendments on categorizing good kids and bad kids and many more other ideas. Other than that, there were many other stories on Christmas and gifts including Gavelier Nirodha’s story on Christmas gifts from his parents which he valued a lot, reminding us how much our parents love us.

The table topic session ended with the final speech done by Olaf. He thanked everyone for teaching him about Christmas and he said that he loved us and would melt for each and every  one of our Gaveliers earning awws from the melted hearts of all our Gaveliers. With that the table topic session came to an end teaching Olaf that Christmas was not only about fun but also that there was a deep meaning to it with love, caring and goodwill.
Afterwards it was the time for our last song of the event, from our talented Gavelier Namina. He sang ‘Tharaka Samuuhayak ‘ and everyone was happily singing along on mute at their very own houses. Thereafter, it was time for our last game of the day, the Christmas card game. The judge was none other than our special guest Olaf. Everyone was sent once again to their breakout rooms to draw a Christmas card for Olaf. I would say that this was the most amusing game of the day. The cards had blue snowmen and even yellow snowmen (Shining bright due to the sun, as the group members said, but yet clearly under moonlight!) There were even special messages in small letters bribing Olaf to pick their card as the best! There were also thug-like Santas, new noses for Olaf and many more weird stuff drawn by our Gaveliers. Olaf was happy seeing all the cards and had a tough time judging the best. But Olaf being Olaf, went with the one which had the highest number of hearts for him!

As Burton Hills once said, ‘the best of all gifts around a Christmas tree is the presence of a happy family all wrapped up together.’ And I think even though everything was virtual, the Gavel family being together, made sure to give each and everyone of us the best gift we all could receive, a happy family. After the controls were handed back to the president, the meeting came to an end, making sure everyone had a ‘blast’ indeed! 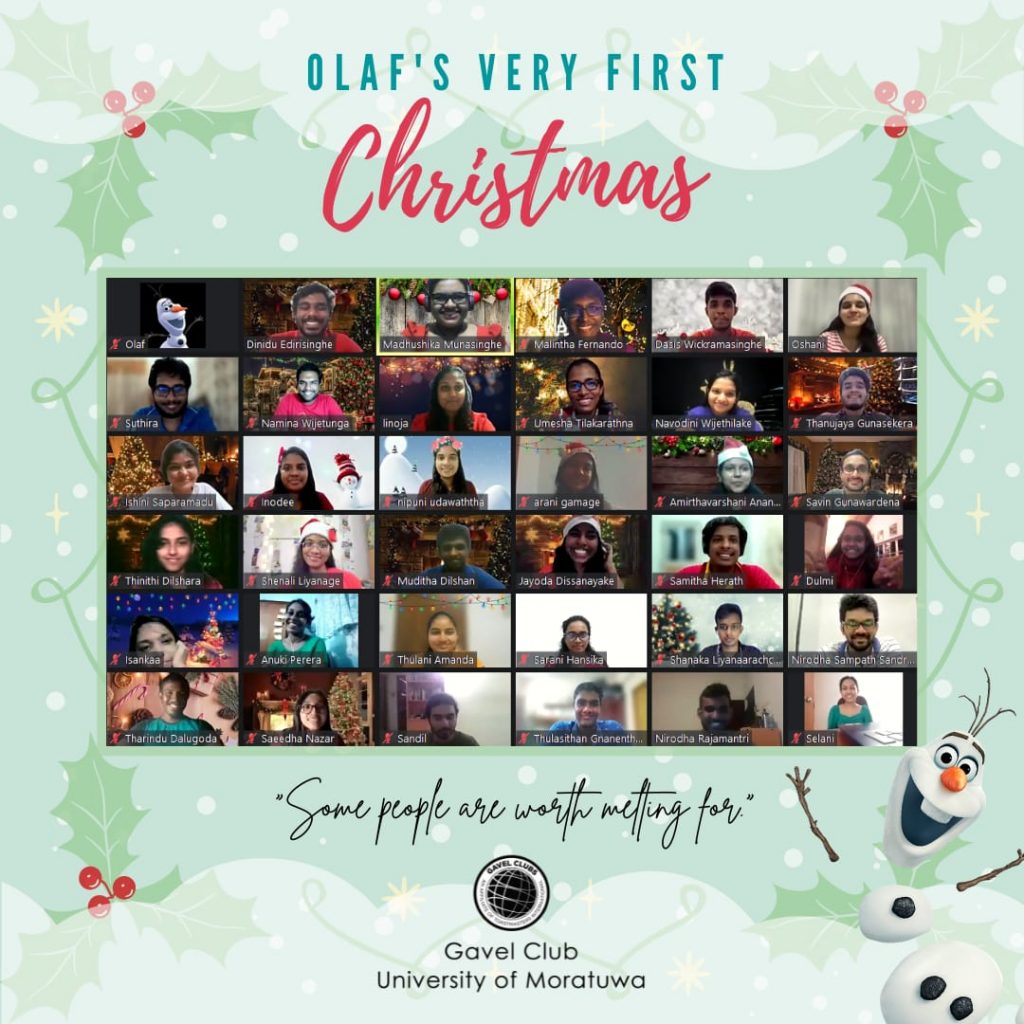