Published on The Nation and The Island 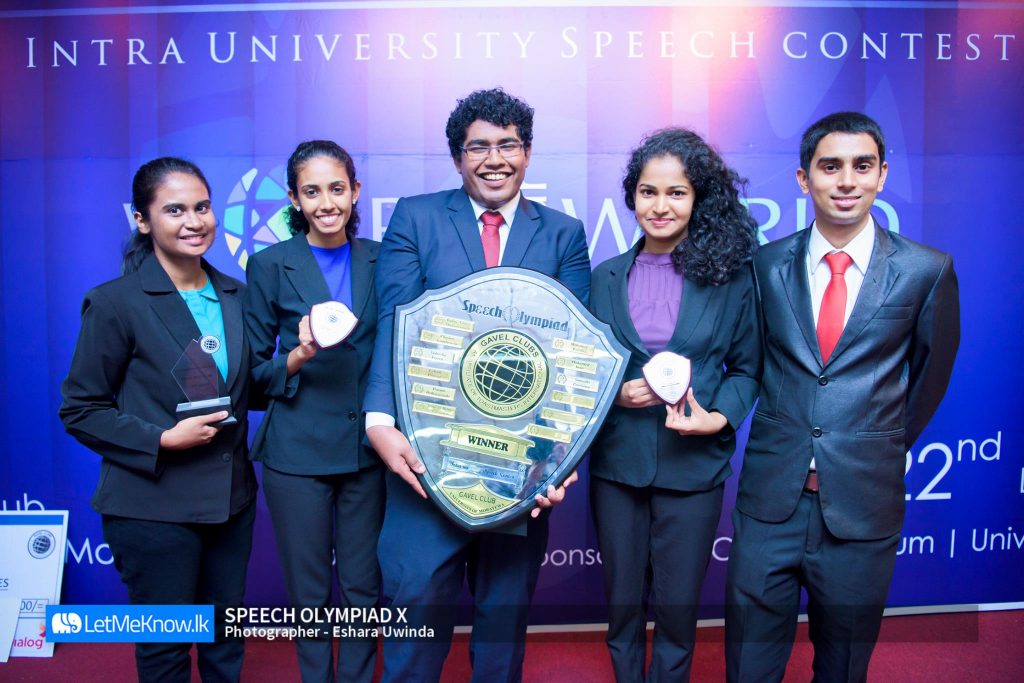 The Grand Finale of Speech Olympiad X was successfully held at the Civil Auditorium, University of Moratuwa on 22nd December 2016. This official intra university speech contest of the University of Moratuwa was organized by the Gavel Club of the university, an affiliate of Toastmasters International. The Vice Chancellor of the University of Moratuwa, Prof. Ananda Jayawardane, presided over the event while Prof. K.K.C.K Perera, Dean of Faculty of Engineering, Mr. P.M. Karunarathna, Dean of Faculty of IT, and TM Punsirimewan Kamburawala, Gavel Club Coordinator of Toastmasters District 82 attended as guests of honour of the evening.

“Speech Olympiad X” was the 10th installation of the competition since its inception in the year 2005. Maintaining a persistent link with the Toastmasters Fraternity of District 82 under the patronage of the club’s counselor, Distinguished Toastmaster Zameen M. Saleem, the club organized its flagship event “Speech Olympiad X – Word your World” to bring out the oratory skills of the undergraduates to light at the grandest stage. While the past competitions gave exposure to number of winners in the Inter University Best Speaker and All Island Best Speaker Contests, this year the event emerged nine years strong and as one of the grandest endeavors of the university calendar.

A group of eminent Toastmasters served as judges since the preliminary rounds and the panel of judges at the Grand Finale was led by DTM Piyakara D Jayaratne whose support played a vital role in the success of the event since the beginning.

The finalists, Kanchana Ranasinghe (Department of Electronic and Telecommunication Engineering), Kasun Ranasinghe (Department of Chemical and Process Engineering), Sandaru Seneviratne (Department of Computer Science and Engineering), Shenali Welikala (Faculty of Information Technology) and Yasoda Gamage (Department of Transport and Logistics Management) electrified the evening with both their prepared and impromptu speeches. Their mesmerizing performance had the packed audience spellbound throughout the event. The dignitaries, undergraduates of the University of Moratuwa and the invited universities, corporates and well-wishers who were present at the event claimed that they were lucky to have witnessed such a display of oratory excellence. Kasun Ranasinghe emerged as the winner after his prepared speech “I love you” which had a humorous start but a heart touching ending with a deep message and also an exhilarating performance at the impromptu session spiced up by his gifted ‘theatrical’ skills. Sandaru Seneviratne emerged as the first runner-up while Yasoda Gamage became the second runner-up after their convincing performances. The contest for the most popular speaker attracted numerous supporters for the finalists from both within and outside the university. This much sought after title was awarded to Shenali Welikala who won it by a wide margin of votes.

“Dream Big 2016”, a series of workshops held in advance to Speech Olympiad X aimed at getting several accomplished speakers to groom the budding speakers within and outside the University was a new addition to the competition this time. The workshops were conducted by TM Tharindu Amarasekere, TM Sandun Fernando, TM Kaishika Rodrigo and Shanuki de Alwis. The sessions empowered the participants to take their oratory skills to a whole new level with the expert guidance.

Several weeks of untiring efforts led by the President of the club Merl Chandana, the two Project Chairs Rochelle Silva and Piyumi Bandaranayake, and the two Assistant Project Chairs, Praveen Kumarasinghe and Chathuranga Amunugama, culminated in an event of unprecedented grandeur. They were constantly supported by all the present and the past members of the club. 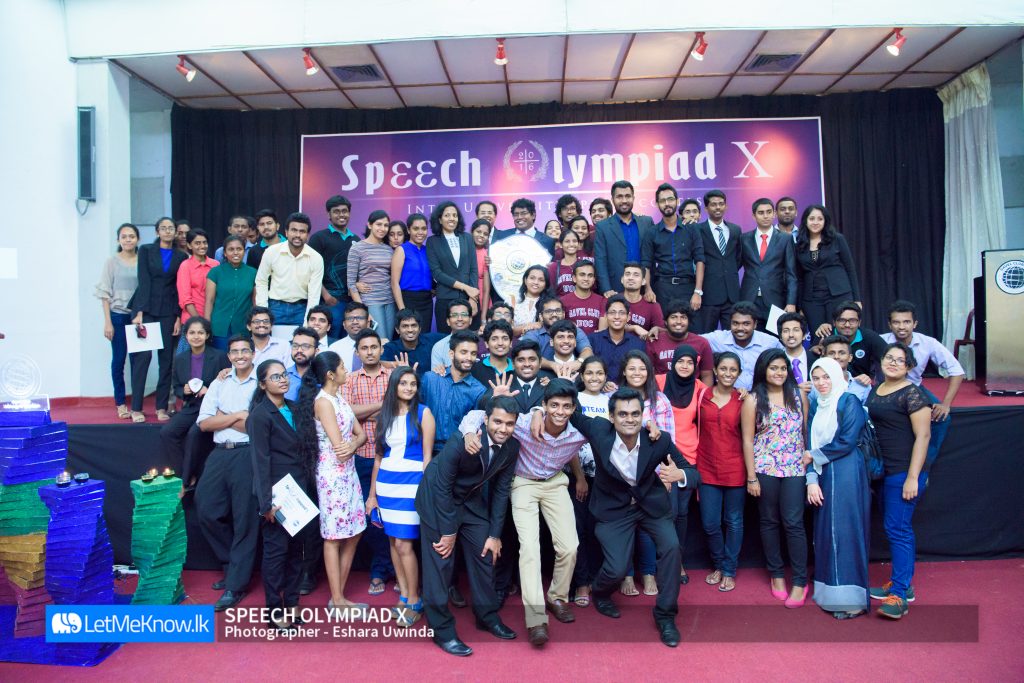