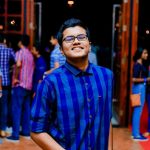 ” Speech is power. Speech is to persuade; to convert; to compel.”

Setting the tone for the competition with a glimpse of what’s to come, Pavan Pitiwaduge, commenced the Semi-Final Round of the illustrious intra-university speech competition, Speech Olympiad XV. With the gaze of an ever-enthusiastic audience falling upon the stage, the Semi Final round of Speech Olympiad XV was conducted physically on the 30th of October, 2022, at ENTC – 01. 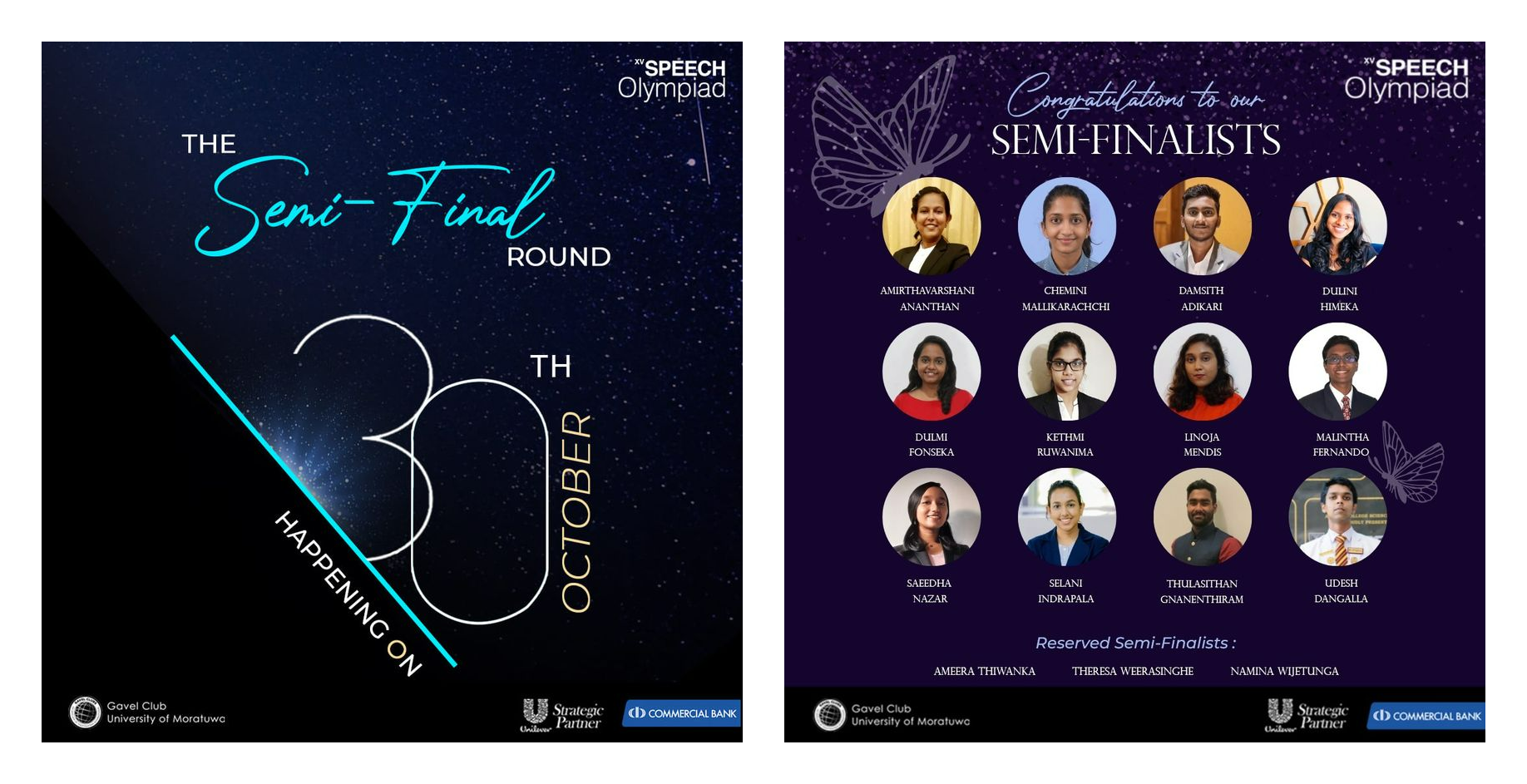 The latest edition of Speech Olympiad saw speakers, speech enthusiasts and undergraduates alike, from the University of Moratuwa bring their competitive best to the preliminary round which was held physically after almost four years. Amidst all the competitors that numbered over 60, 12 of the best speakers were chosen by the judges to take the Semi-Final stage. But first of all, let me shed some light on how the speakers polished their skills in preparation for the grand arena of the Semi-Finals.

After the announcement of the semi-finalists on the 15th of October, they were briefed on the proceedings of the competition, and the preparations began. The speakers indulged in revising and rehearsing their speeches with their mentors from the get-go. A specialized session focusing on impromptu speeches was conducted by an international public speaker and coach, Thomas Chen, in which he shared important techniques and tips with the semi-finalists. Another impromptu session was conducted physically with the help of senior gaveliers, in which each competitor got the chance to discuss how they would approach impromptu topics.

While the Semifinalists were busy perfecting their acts, the organizing committee was “all hands on deck” behind the curtains. The Contest Chairs, Moderators, Timers, and Sergeants at Arms were assembled and briefed, laying the groundwork for a flawless event on the day of the competition. The committee was meticulous in planning every detail, making sure every technical aspect was in order, and arranging backups to ensure that the event would proceed seamlessly. After two weeks of planning and sketching every detail, it was time for the Semi-Final round to finally unravel on stage.

After welcoming everyone, the Contest Master, Zafra Rifky, officially began the prepared speech round by introducing the 12 semi-finalists.

After announcing the rules and regulations of the round, the stage was set for the speakers. The 1st speaker, Damsith, kicked off the round with his speech, “The Purple Heart,” as he looked to shine bright against the spotlight of the Semi-Final stage, just like a diamond. He emphasized the importance of being unique in your own way, regardless of the environment you are put in. Next, Udesh dashed onto the stage with his speech, “You Look Like a Grandpa,” as he explained how having to wear glasses exposed his prejudices and urged the audience to set their own prejudices aside and be themselves, no matter what. The word “eloquence” best describes Chemini’s speech, titled “She-mini.” She spoke on how you should leave behind society’s perception of you, define yourself, and always aim high. “Can You See The Finishing Line?” was the title of Malintha’s speech. He brought out one of his childhood experiences and inspired the audience to never give up, even if the path to their goals may not be clear.

Saeedha seemed to know her way around the masks she wore as she took the stage with her speech, “Your Mask is Beautiful.” She elaborated on the importance of accepting oneself regardless of the different identities that a person might create for themselves. “Are You Ready?” was the title of Kethmi’s speech. She took a strong stance against the pile of questions thrown at her on a regular basis and reminded the audience that there is always someone who believes in us, even when the whole world seems to be asking questions. Dulmi seemed to be in her natural habitat as she flawlessly drew lines between life and a bag that weighed her down in her speech: “A Little Bit Heavier.” She encouraged the audience to let go of their insecurities and follow their hearts. Selani brought a powerful message to the table in her speech, “The End.” She explained how what she thought was the end of her journey was the turning point of her life and made the audience believe that an “End” might just be the “Beginning” of something amazing.

Linoja spoke about how she found comfort in the magical hallways of Hogwarts and the world of Harry Potter every time she needed a friend. She pointed out how we can find a “lifelong friend” even in inanimate things. The 10th speaker, Thulasithan, was immaculate in the delivery of his speech titled, “Third Row to My Left.” He spoke about a memory from his childhood and how one simple smile could make someone’s day a whole lot better. In her speech titled “Regret It?,”  Dulini brought to light how we shouldn’t regret our mistakes and failures. She explained how she let go of her regrets and inspired the audience to let go of their past mistakes, learn from them, and ultimately make themselves better. Amirthavarshani’s speech, “Will It Be a Sixer?” was the perfect icing on the cake as it marked the end of the prepared speech session. She spoke with passion about her love for cricket and how we should always follow what we love, even when there are a million reasons to give up.

With the conclusion of the entertaining yet inspiring prepared speech round, a short break preceded the impromptu round.

The much-awaited Impromptu Speech round began with all contestants being briefed by the Contest Master. All the contestants were taken to a separate room, where they were assigned to a Sergeant at Arms. Each speaker was given a pen and paper for two minutes to organize their thoughts before being escorted to the main hall by the relevant Sergeant at Arms. Every speaker was given the same topic, which was “Only in Darkness, You Can See the Stars.” The contestants took the stage according to the pre-defined order and joined the audience once they had completed their speeches. All the contestants seemed to be effortlessly in sync with their thoughts as they delivered their speeches to perfection. A silent yet very present sense of awe was in the air by the time the final contestant was done with her speech.

The moderator came back once again to wrap up the Semi-Finals of Speech Olympiad XV and announced that the finalists would be revealed soon.

Meanwhile, Gaveliers Namina and Shenali got the whole audience to join in on their singing session, even inspiring more Gaveliers from the audience to take the stage, play the guitar, and sing some amazing songs of their own. The role players and all the gaveliers who were involved in organizing the event leaned back on their chairs comfortably while listening to the music, knowing that they had done an exceptional job. Kudos to all the talented Semi-Finalists for making every speech a masterpiece and to all the role players who ensured that the Speech Olympiad XV Semi-Finals went as smoothly as possible.

You could cut the anticipation in the room with a knife as the Contest Master took to the stage for the final time to reveal the decision of the judges. The five finalists and the reserved finalist were announced, erupting the whole room with cheers and applause. The day concluded with everyone praising the Semi-Finalists and wishing the Finalists the best of luck in their journey to attain the glorious title of Speech Olympiad XV.

The hunt is on for the coveted title. The Final Chapter of Speech Olympiad XV awaits. 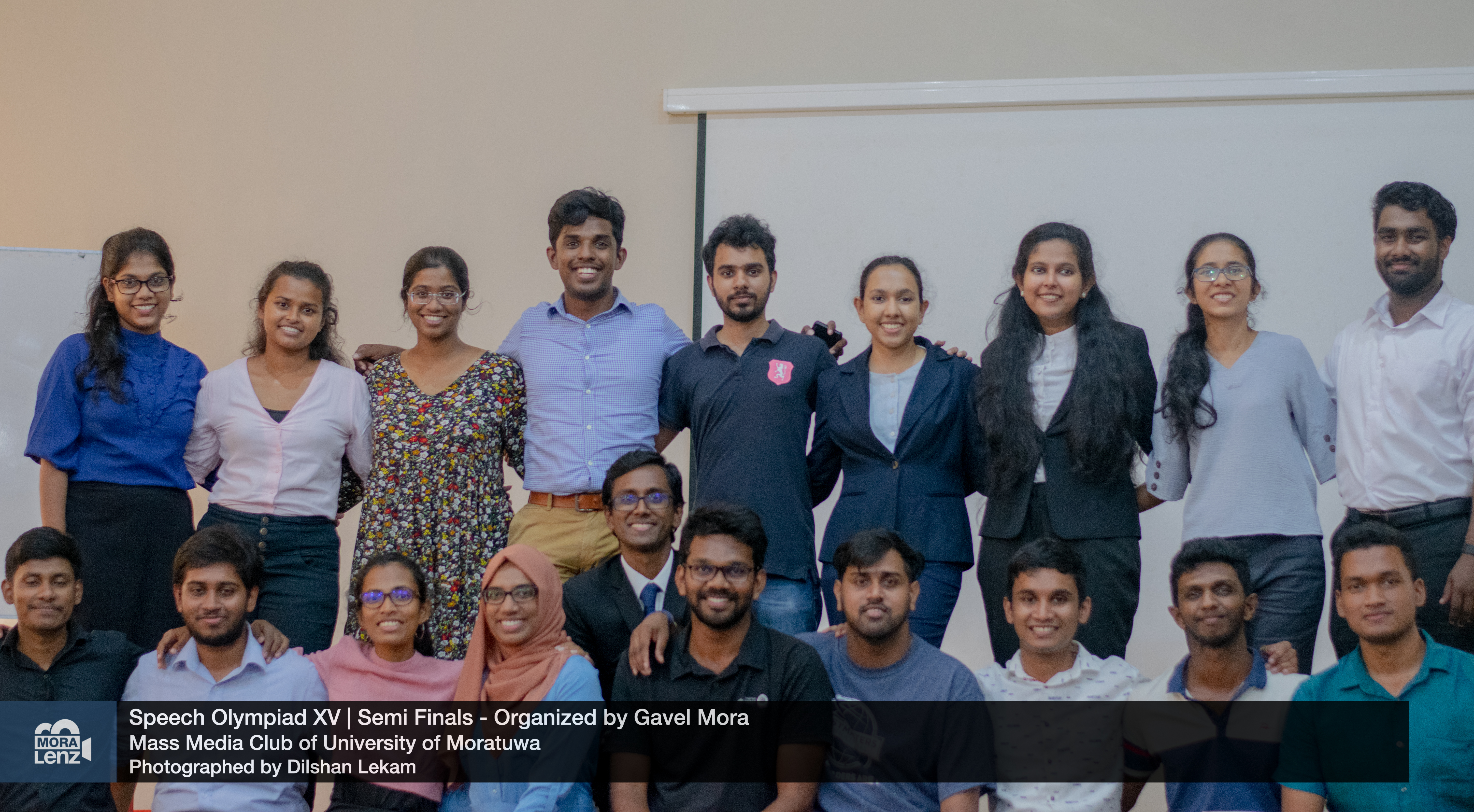